The rise of ‘mega-ships’ (often defined as ships with a capacity greater than 10,000 TEUs) took place in earnest during the recovery from the 2008 financial crisis. In their search for greater fuel efficiency and economies of scale, the world’s container carriers increasingly ordered larger and larger vessels, especially for use on the Asia-Europe trade lane.

Until the development of mega-ships, carriers that sought to service the East Coast of North America with the earlier generation of ‘post-Panamax’ ships needed to transit the Suez Canal because those vessels were too big to sail through the Panama Canal.

With the gradual introduction of the mega-ships, the average capacity of container ships deployed on the Asia-Europe trade lane has become especially large.

Despite the cost-effectiveness of mega-ships, some major North American ports have faced the challenge of mitigating the bottlenecks at marine terminals that result from container exchanges involving such massive volumes of cargo.

At sea, other sorts of challenges may stem from the fact that there are so many containers on these huge vessels. Several high-profile (even deadly) fires on mega-ships have highlighted the dangers of packing so many containers onto a single vessel, while driving up related insurance costs. In addition, the enormous capacity of such mega-ships often raises the probability that dangerous goods may have been loaded aboard.

Several fires on board container ships have been caused by hazardous or flammable cargo that was misdeclared. One of the most common culprits is calcium hypochlorite, used to treat drinking water and swimming pools. While this chemical may be carried on board ships, there are stringent guidelines regarding how it should be carried. Some less scrupulous shippers have misdeclared it as fertilizer or as other more stable compounds in order to avoid paying a higher freight rate.

Alerted to such risks, ship operators, insurers and regulators are increasingly focusing on the chemicals, batteries and other goods that can trigger or feed a fire. 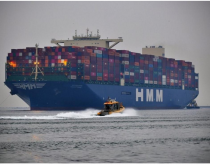 18 Aug 2020
Fewer sailings in the first half of the year as carriers canceled capacity have cut the volume of Europe’s imports, but the bigger ships deployed on the trades from Asia continue to record huge call sizes.
MORE »

Elbe dredging serves notice to Hamburg rivals
24 Jul 2019
It has taken many years, but finally dredging work on the crucial river access to Europe’s third-largest port has begun.

Analyst: Asia-Europe capacity set to outstrip demand
09 May 2019
The economic and trade forecasts for 2019 are mixed, but in volume terms the year is off to a good start, as evidenced by a strong first quarter for Hapag-Lloyd.

Shippers urged to oppose Houston big ship limits
06 May 2019
Shippers that import and export goods through the Port of Houston are being urged to contact legislators and express opposition to two bills that would limit mega-ship calls at the port to one a week.

Cascade of capacity cuts to mark Asia-Europe trade
21 Jan 2019
Asia-Europe carriers are expected to deploy a host of strategies to absorb the mega-ship capacity coming online this year.

Global port productivity static while mega-ship pressure rises
11 Dec 2018
At the JOC Port Performance North America Conference in Newark, New Jersey, on Tuesday, a key technical director offered insights regarding how to increase port productivity as ships get bigger, including what stakeholders should expect from automation.

Project to allow dual mega-ships at Baltimore advances
07 Dec 2018
A $6.9 million federal grant will enable the Port of Baltimore to dredge to 50 feet a berth at its only container terminal, enabling the terminal to better handle growing cargo volumes by hosting two mega-ships at once.

Muted trans-Pacific forecast signals challenges beyond tariffs
04 Dec 2018
Ocean carriers will have even more reason to show trans-Pacific capacity discipline, if Sea-Intelligence’s demand forecast proves to be accurate; however, a current container shipping trend may make that doubly hard.

US Southeast ports lower chassis pool target
04 Dec 2018
The port authorities involved believe the current total is good enough for now, but how long that remains the case, and what action they would take moving forward, depends on several factors.

Philadelphia to be 14,000-TEU ship ready by April
27 Nov 2018
With the completion of a dredging project by the end of the first quarter of 2019, the Port of Philadelphia will have the depth needed to attract larger ships with considerably more cargo — the first phase of a $300 million port upgrade.

Regulatory pressure on container lines builds
16 Nov 2018
Those who want to end the legal framework exempting liner shipping consortia from European Union antitrust rules say it would increase competition and therefore shipper choice. But this is an instance where the solution may ultimately lead to an outcome that’s worse than the current condition.

Industry leadership needed to helm NY-NJ port
05 Oct 2018
In the decade ahead, the Port of New York and New Jersey will face intensifying competition — from multiple ports — for discretionary cargo. With the authority’s head of seaport departing, the moment requires the hiring of a leader with in-depth knowledge and experience overseeing container cargo moves through a complex, multimodal system.

Mega-ship deployment at NY-NJ scales up amid peak season
24 Sep 2018
The peak season on the US East Coast in the weeks ahead could provide a test regarding whether the Port of New York and New Jersey can handle the increased volume and surges in activity generated by mega-ships.

Halifax expands as eastern Canada volume gains outpace west
11 Sep 2018
The port of Halifax’s volume has grown amid the global economic recovery, and now it has a flexible expansion plan to position it for even greater volume and bigger ships.

CMA CGM mega-ship call puts Hamburg channel back in spotlight
16 Mar 2018
The biggest ship in CMA CGM's fleet called at Hamburg this week, but even though the port has the infrastructure to handle mega-ships, the delay in dredging the Elbe River access channel continues to hold back volume growth.

HMM’s expansion strategy has analysts scratching their heads
27 Feb 2018
Analysts are trying to figure out HMM's growth plans, with the South Korean carrier widely expected to place its mega-ship order.

Mega-ship delivery keeps Asia-Europe capacity on the rise
26 Jan 2018
The mega-ships continue to flood in to the Asia-North Europe container trade lane.

Evergreen orders eight 11,000 TEU ships
12 Jan 2018
The orders come after Cosco and Yang Ming delayed delivery of roughly 200,000 TEU of capacity to 2019 amid signs overcapacity remains in the market.

Cosco defers mega-ships as excess capacity builds
10 Jan 2018
As capacity floods into service, some carriers have started to delay the delivery of new mega-ships.

Second contract keeps Charleston’s deepening on track
31 Oct 2017
The Charleston dredging project has proceeded quickly through a series of milestones since the corps recommended the deepening in 2010.

Mega-ships dominating North Europe port calls
23 Oct 2017
By 2020, hub ports in Europe can expect the vast majority of all calls to be made by ships with a capacity greater than 14,000 TEU.

BCOs seek assurances as mega-ships begin NY-NJ calls
22 Oct 2017
How the Port of New York and New Jersey handles the ramp up in business will go a long way in determining the port’s future growth.

Ocean Network Express unconvinced of mega-ships benefits
17 Oct 2017
The landside ability of the supply chain to handle volume generated by mega-ships must improve before carriers can achieve the lower unit costs their deployment promises.

Hire an operator for NY-NJ

PETER.TIRSCHWELL@IHSMARKIT.COM
The Port of New York and New Jersey will face multiple-port competition for discretionary cargo in the decade ahead and with the head of the seaport departing, that intensifying competition calls out for a leader with operating experience.
MORE »

Inaccurate surveys of ocean depths a threat to mega-ships