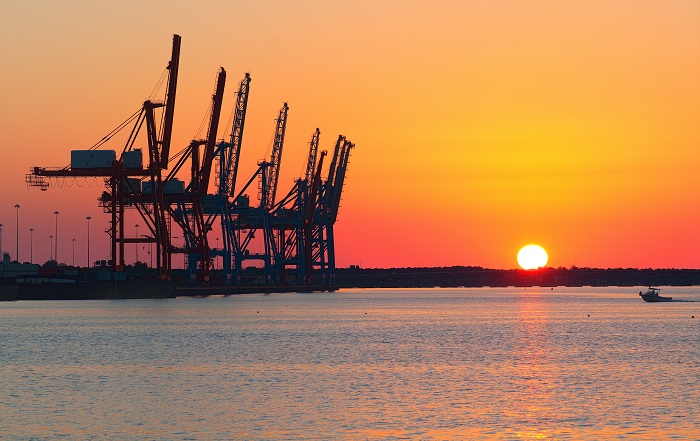 The patience is beginning to pay off in Virginia as overall fluidity is heading in the right direction, according to truckers and port officials. All sides agree turn times are more consistent than in prior years. (Above: The Port of Virginia.) Photo credit: Shutterstock.com.

Six months since the Port of Virginia instituted an appointment system, early results from port officials and truckers indicate more predictable turns than in prior years. That’s saving as much as 20 minutes in some situations and eliminating the guessing game of shippers for when their cargo will be delivered. Nearly all trips during appointment hours have been completed within one hour, with some only taking 40 minutes, according to the Virginia Port Authority.

Facing volume growth — laden imports rose 4.5 percent in the first half of 2018 — and larger ship calls, terminals in Virginia like others in Vancouver, Los Angeles-Long Beach, and New York-New Jersey have implemented truck appointment systems to maintain fluidity while vessels discharge more than 5,000 TEU per call in some situations. An appointment system is one part of the Port of Virgina’s nearly $700 million investment in projects to renovate and build out Norfolk International Terminals (NIT) and Virginia International Gateway (VIG).

The Virginia Port Authority began requiring truckers to book appointments this March to visit NIT. Port officials unveiled the program at VIG in June, a terminal plagued by unreliable turn times in recent years. Port truckers say a turn would be 45 minutes one day, then as much as six hours another day. The trucking community protested outside VIG in late March, holding signs such as “Don’t waste our time” and “Our time matters.” Port officials urged patience while they rolled out an appointment system, addressed equipment breakdowns, and increased the chassis pool. Each cog is critical to successfully delivering a seamless experience for customers.

Having so many boxes dropped in concentrated bursts requires each leg of the terminal operations to work in sync to maintain fluidity. Cranes need to operate with peak performance, entrance and exit gates need to process truckers smoothly, chassis need to be safe and available, and inspections must be thorough but quick. When any single step breaks down, delays can pile up and frustrate drivers and cause cargo owners to wait longer for their containers. By metering the flow of trucks with appointments, terminals prevent a stampede of draymen arriving in any individual hour.

Viriginia — fluidity is heading in the right direction

The patience is beginning to pay off in Virginia as overall fluidity is heading in the right direction, according to truckers and port officials. All sides agree turn times are more consistent than in prior years. Six of 13 new VIG container stacks are operational, allowing mechanics to repair older, dilapidated gantry cranes. The Virginia Port Authority is also adding new chassis to the existing fleet of 17,000 units, as truckers struggle to find roadable equipment after 14,000-TEU mega-ships discharge.

Appointments are required at NIT from 5 a.m. to 11 a.m. and at VIG from 3 a.m. to 8 a.m., and trucking companies receive a one-hour window. During these hours, average turn times run between 40 minutes and 50 minutes.

Reservation systems can theoretically achieve the goal because port authorities cap how many trucks arrive per hour. If managed correctly, a port authority allows only as many trucks as crane operators can handle per hour, preventing backups from a swarm of drivers. By knowing who will arrive during an hour, a terminal operator can also place the containers due to be picked up in front.

If everything goes as planned, turn times would be lower and quite predictable. Cargo owners, in turn, would be able to have a reasonable idea of delivery times without much variability and can plan their supply chains accordingly.

“The idea is to create a predictable, reliable, steady flow of trucks during the hours of reservations. Assuming your equipment is working properly and you’ve had a chance to prepare for the trucks coming, the net result is a better experience for all our customers,” said Rich Ceci, Port of Virginia’s senior vice president of technology and projects.

One potential stumbling block in practice is whether or not trucks arrive evenly throughout an hour. If every driver arrived between 7:15 a.m. and 7:20 a.m., for example, then backups may be unavoidable. But such a bunching isn’t occurring as of now, port officials said.

“Statistically, every single minute in an hour has exactly the same probability of a truck arriving. When we measured it [on actual data], the distribution was almost exactly that. The minute of arrival is an even spread across the hour,” Ceci said.

Skeptical truckers have started to believe

Many of the most vocal critics in March have acknowledged that conditions are better since the appointment system. Port truckers will often still identify other roadblocks to voice complaints, but the frequency of horrific five- or six-hour delays has dwindled since March.

“Overall it has been beneficial. More and more drivers are having their own login into Pro-Pass [the reservation portal], which is giving them the advantage of setting their own appointments. Although the caveat is that too many users maybe are affecting the website performance,” said George Berry, an owner-operator who founded For Truckers By Truckers, a Facebook group of Virginia draymen.

Although the Pro-Pass system can be glitchy and cranes still break down, Berry agreed that terminals are doing a “much better job” in maintaining access to containers.

Charles Glover, president of GTL Transport, identified one situation in July when his driver was detained in VIG for more than five hours. Nevertheless, he acknowledges these experiences are few and far between, whereas in the past it was expected, and communication with port officials is better.

“Our take is that the needle has moved slightly in the direction of improvement. We have a positive review of the reservation system so far, even though it’s too soon for us to tell for certain,” Glover said.

He also likes how the Pro-Pass system is a check and balance against GTL’s internal transportation management system to ensure operational staff know where all their drivers are located. Like Berry, Glover acknowledges Pro-Pass can be glitchy, but port officials are working to resolve those IT issues.

Eventually the Virginia Port Authority will extend appointment hours into the midday and afternoon, but they plan to leave open time slots when reservations are not necessary. The reason is that some shippers arrange trucking just before their free time expires. To avoid demurrage, port officials offer non-appointment time to handle last minute pickups.