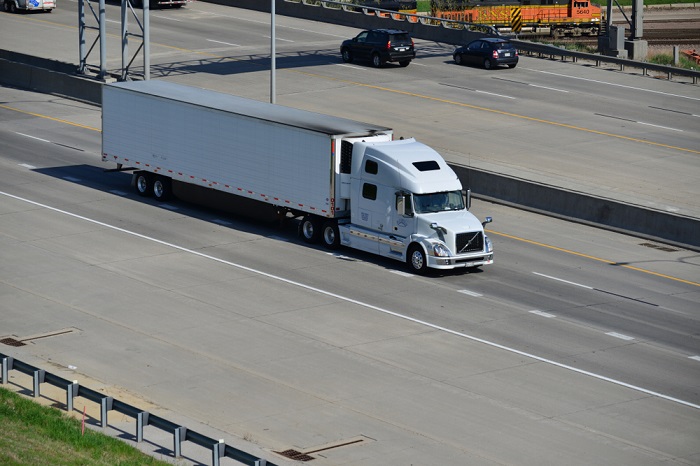 The data from the BLS employment report indicate for-hire trucking companies added approximately 31,900 workers to their payrolls from Jan. 1 through Oct. 31. In the same period last year, they added only 4,700 employees. Photo credit: Shutterstock.com.

For a measure of how hot the US trucking market actually is this year, look to the trucking employment numbers released Friday for October 2018. First, the number of employees on for-hire trucking company payrolls tracked by the US Bureau of Labor Statistics (BLS) rose 2.5 percent year over year, the fastest annualized growth rate for that statistic so far this year.

More impressive, however, is the sheer number of trucking jobs created in 2018 to date. The data from the BLS employment report indicate for-hire trucking companies added approximately 31,900 workers to their payrolls from Jan. 1 through Oct. 31. In the same period last year, they added only 4,700 employees. In the same period in 2016, the number dropped by 5,900.

That’s a clear signal of just how massive the turnaround has been for US truckload and less-than-truckload (LTL) carriers in 2018. The fact that nearly half those 31,900 jobs — 15,100 positions — have been added since this July shows trucking recruitment isn’t slowing overall, even though the number of jobs gained slipped sequentially from September to October.

For-hire carriers added 2,400 employees in October, down from 5,800 in September and 6,900 in August, but those monthly figures add up to 13,800 for-hire trucking jobs created in the third quarter, compared with a net loss of 1,200 jobs in the second quarter, thanks to a 5,900 employee shortfall in April. The picture is one of long-term increase, rather than decline. 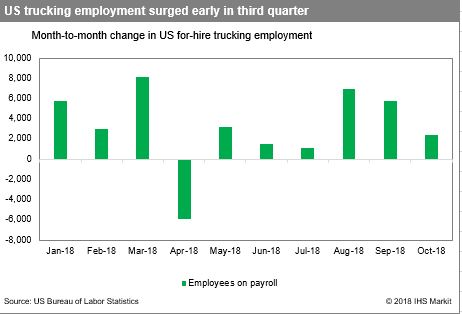 Not all of those jobs represent truck drivers, although a higher percentage of the total probably works behind the wheel. And there are more trucking companies (and employees) than are tracked in the BLS survey. But the data reflect how the trucking industry has flexed its hiring muscle in 2018, even as larger motor carriers struggle to hire and retain truck drivers.

The latest payroll gains put the JOC For-Hire Trucking Employment Index at 103.1, making October the third record-setting month for the index, which measures trucking employment against job numbers from the pre-recession hiring peak. The latest reading indicates for-hire trucking payrolls were 3.1 percent higher in October than in the fourth quarter of 2006.

Still, the American Trucking Associations (ATA) estimates trucking is short 50,000 drivers in a market where for-hire driver wages are rising by double digits toward a mark somewhere above $70,000 a year. Private fleet wages can go even higher. The median for-hire truckload driver pay is about $53,000, ATA said earlier this year, up 15 percent from its 2013 survey.

“There’s not a shortage of truck drivers, there’s just a shortage of really good ones,” Craig Callahan, executive vice president at Werner Enterprises, said at the 2018 JOC Inland Distribution Conference in Oak Brook, Illinois, Oct. 23. “We would like to grow the fleet, sure,” he said. “We can get the equipment, but we still have that big variable, which is the labor force.”

Many of those new employees may be working for smaller trucking companies. The number of drivers employed by carriers operating from one to six trucks rose 68.6 percent from February 2012 through May 2018, while carriers with more than 500 trucks expanded their driver pools by 20 percent, according to an analysis of Federal Motor Carrier Safety Administration (FMCSA) data.

That implies that 55 percent of US truck drivers work for carriers operating more than 100 trucks (and 38 percent for carriers with more than 500 trucks), but those larger carriers are growing more slowly, in terms of employment, than their smaller counterparts. And those largest carriers, with their stringent qualifications, are the ones facing the biggest shortage of truck drivers.

“The availability of commercial drivers continues to be tight and the pressures on driver recruiting expenses and pay for the over the-road business have been growing,” Christopher B. Lofgren, CEO of Schneider National, said in an earnings call last Thursday transcribed by Seeking Alpha. In response, Schneider shifted some resources to intermodal rail.

Truckload carrier US Xpress Enterprises, which like Schneider went public in the past year, had third-quarter recruitment troubles. “Tractor count in our over-the-road division troughed in the back half of the third quarter as we experienced a slight deceleration in the pace of hiring, which has since reversed,” President and CEO Eric Fuller said in an earnings call Thursday.

“Looking to the fourth quarter, we have seen a marked improvement in hiring and retention as we continue to execute upon our initiatives that are focused on being a valued partner to our professional drivers by offering them increased miles, modern equipment, and a driver-centric operations team,” Fuller said. That’s helped raise the carrier’s truck count higher, he said.