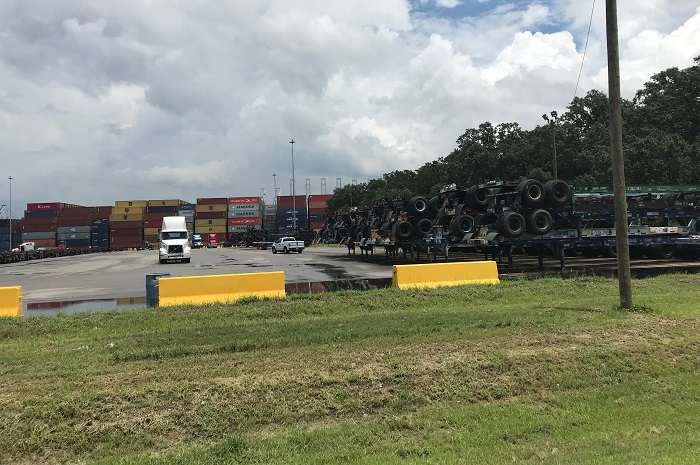 The Federal Maritime Commission (FMC) has approved an application to create a Southern States Chassis Pool, covering terminals in six states and opening up the possibility of nearly 10,000 additional chassis to efficiently move containers increasingly arriving on post-Panamax vessels.

The Georgia and South Carolina port authorities — traditionally rivals competing for business from beneficial cargo owners (BCOs) — teamed up to conceive the idea and shepherd it into reality. Griff Lynch and Jim Newsome, executive directors of the Georgia and South Carolina port authorities, respectively, delivered a consistent message: we need more chassis. The current pool has about 53,000 chassis, but Lynch and Newsome believe the number has to be at least 60,000 to 65,000 to handle the new realities of the industry. While ship calls are declining, the size of the vessels are much larger than a decade ago so the volume of containers is quickly rising. Some post-Panamax vessels, for example, can discharge 5,000 to 6,000 containers in a single stop, requiring port authorities to invest in cranes and equipment providers to supply more chassis to keep the cargo moving. Ocean carriers benefit from larger vessels because they can carry the same amount of containers with fewer ships, but shippers cannot realize those savings if turn times deteriorate because there aren’t enough chassis.

Anyone who drives through the Wando Welch Terminal in Charleston or Garden City Terminal in Savannah would quickly see that the room is there for chassis, if they were available. Cargo owners and trucking companies, however, require more than just additional chassis. They demand reliable chassis with anti-lock brakes, LED lights, radial tires, and reliable electrical wiring — the so-called "premium chassis."  That is the other goal: only the best equipment.

The North American Chassis Pool Cooperative (NACPC), a trucker-founded chassis provider, will own and operate the Southern States Chassis Pool. Truckers will pay a single rate, regardless of which equipment provider is stenciled on the chassis, and the service will be provided at a cost — no profits will be distributed to the NACPC owners, according to NACPC chairman Dave Manning.

BCOs and truckers universally supported the new chassis pool in comments to the FMC. Newer chassis providers such as American Intermodal Management also backed the measure because they were not contributing to the soon-to-be defunct South Atlantic Chassis Pool. Contributing to the Southern States pool will help reach the goal of adding up to 10,000 chassis.

The Institute of International Container Lessors (IICL) stood alone in opposition in comments to the FMC. Although the group represents TRAC Intermodal, Direct ChassisLink, Inc., Flexi-Van Leasing, and Triton International, JOC.com learned that two of them declined to participate in the IICL’s letter. One was Flexi-Van, the other has not been publicly identified.

For shippers, time will only tell whether the new pool will accomplish their goals. If it does, the Southeast could become a viable competitor to the Northeast and West Coast as ocean carriers continue to upsize vessels serving the United States.