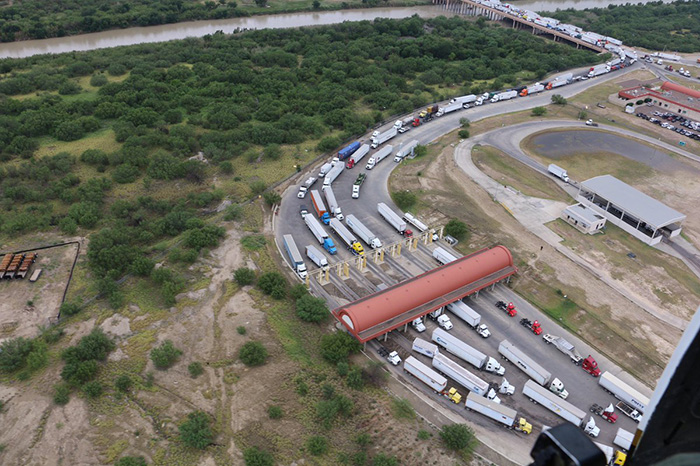 Customs authorities on either side of the border plan to restore operations to the largest US-Mexico truck crossing this coming Monday, after severe weather damaged the World Trade International Bridge last Sunday.

Shippers moving cargo between the United States and Mexico over the bridge have faced detours and delays since Monday, when US Customs and Border Protection (CBP) and Mexico’s Servicio de Administracion Tributaria (SAT) closed the structure connecting Laredo, Texas, and Nuevo Laredo, Tamaulipas.

Since then, traffic from the World Trade Bridge has been rerouted to the Laredo–Colombia Solidarity International Bridge, 18 miles west and roughly a half-hour’s drive away, where operations have remained in good working order, unaffected by Sunday’s storm.

The detour via the Solidarity Bridge has added time, including as much as an hour’s wait time, to shipments crossing the bridge, which — unlike the totally commercial World Trade Bridge — carries pedestrian as well as commercial and noncommercial traffic.

“CBP Field Operations at Colombia-Solidarity Bridge advised that its hours of operations will be extended by one hour, from 8 a.m. to midnight to 7 a.m. to midnight or beyond, commensurate with the volume of traffic, effective on Tuesday, May 23,” CBP and SAT said in a joint statement.

As operations are restored over at the World Trade Bridge, CBP and SAT have promised to prioritize perishable and medical-related shipments as truck lanes come back online.

The World Trade Bridge is the busiest US-Mexico border crossing and has only been getting busier in recent years. The US facility processes more than 12,000 cargo vehicles per day. According to the US Bureau of Transportation Statistics, 2.1 million trucks used the crossing in 2016 alone, up 3.4 percent from the year prior.

Those crossing came to a halt Sunday, however, after the area was hit by a meteorological phenomenon known as “flat winds,” CBP and SAT said. Strong winds, rain, and hail assailed Laredo and Nuevo Laredo causing widespread power outages, flooding, and structural damage — though no injuries were reported.

On the Mexican side of the border, roofs were blown off, tractor trailers were overturned, computer equipment was doused in rain, power was lost, utility poles and advertisement billboards were toppled, and Mexican customs staff quarters were significantly damaged.

CBP and SAT say they have both been in constant communications with one another since the onset of Sunday’s natural disaster. The two agencies still plan to restore operations to the World Trade Bridge this coming Monday, and they have promised to make an annoucement if those plans change.