US freight drivers weak, but recession not certain: economists

US freight drivers weak, but recession not certain: economists 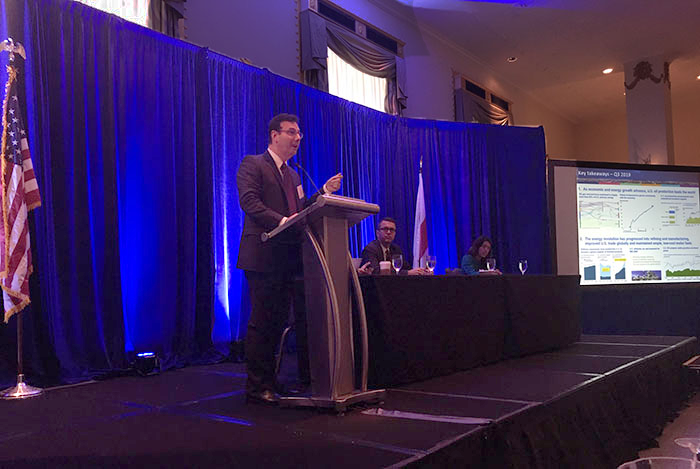 According to the IHS Markit Purchasing Managers’ Indices (PMI), 11 of the top 20 US export markets were contracting as of August. Photo credit: Ari Ashe.

Business activity in the key industries feeding United States surface freight transportation are lackluster this year, but economists with industry associations don’t believe a recession in 2020 is certain.

During a Monday conference hosted by the American Trucking Associations (ATA), the most common words to describe business conditions were “slowing,” “sideways,” and “sluggish.” When asked about the future, however, speakers were quick to offer terms like “resilient” and “optimistic.”

Much of the discussion was focused on the international export environment for US goods, such as resins and automobiles, and the health of US imports for retailers. According to the IHS Markit Purchasing Managers’ Indices (PMI), 11 of the top 20 US export markets were contracting as of August. Loaded imports from Asia were up only 1 percent in August compared with the same month in 2018, and year-to-date volumes have grown just 1.9 percent year over year to nearly 11 million TEU, according to PIERS, a sister product of JOC.com within IHS Markit.

The IHS Markit Global PMI was 49.5 in August and 47 in the Eurozone, each lower than the baseline of 50. US manufacturing production is down 0.4 percent year over year through August, levels unseen since the 2016 industrial recession, according to the National Association of Manufacturers (NAM). The American Petroleum Institute’s Distillate Economic Indicator — a measure of fuel demand, pricing, and inflation in which 0 represents neutral conditions — was -0.1 in August and also -0.1 on a rolling three-month average, which the group associates with slowing industrial production.

ATA Chief Economist Bob Costello, however, said the US trucking industry is doing fine as a whole, arguing the contract loads coming from these industries are up from a year ago.

“There are industries going sideways, but retail is up a bit and that feeds into trucking too. First of all, we’re coming off of high levels and we are growing off of that in the trucking industry. So, things are not all that bad,” he said.

Demand levels in the spot market have also improved since the spring. August had the largest number of spot loads of any month this year, according to DAT Solutions.

NAM chief economist Chad Moutray said the IHS Markit data clearly shows the European economy is in recession and China’s number being only a tick higher than 50 is not a positive sign. Manufacturing is so slow because the global economy is sluggish, he said. Not only are 11 of the top 20 US export partners contracting, according to the data, but Moutray believes China’s number will fall below 50 again this month and two of the other countries don’t report manufacturing data.

“We want this to be as blue [higher than 50] as possible, like last year with a sea of blue. These are who buys our products. These are the top 20 countries that we sell into, and we’ve had weaker export data this year. This is the reason why our manufacturers are less upbeat than they were last year,” Moutray said during the ATA event.

He is positive, though, about the economy in 2020. Moutray’s forecast is for 2.3 percent growth in gross domestic product in 2019 and 1.8 percent next year.

“I see manufacturing production ending this year flat and then maybe a little up next year. Last year it was up 2.7 percent, so we’ve clearly seen some softening. I think there are certainly sectors of manufacturing in ‘recession,’ but I would prefer to use the word ‘contraction’ overall,” he said.

IMO 2020 to have minimal impact on diesel rates

Under the International Maritime Organization’s (IMO's) low-sulfur fuel rule, vessels from Jan. 1, 2020, are required to burn fuel with a sulfur content of not more than 0.5 percent, down from the existing cap of 3.5 percent. Producing the compliant low-sulfur fuels to meet the mandate is expected to pull significant volumes of diesel fuel into the maritime sector, resulting in supply tightness and higher prices for the on-road market.

He doesn’t believe the drone strikes taking out capacity in the Middle East would have a major impact on US diesel prices in 2020, especially given the domestic supply of low sulfur diesel.

“We are well prepared for IMO 2020. There is a short-term impact that goes with IMO 2020 because you are switching a lot of demand from residual to distillate fuel oil in a short period of time. But most refiners have found techniques to maximize the yield, so we feel like we are well positioned in the US,” Forman added.

Werner Enterprises CEO Derek Leathers also downplayed the severity of the impact of IMO 2020 on surface transportation last week during a panel at a conference put on by the Council of Supply Chain Management.

“The combination of different ways folks will be able to comply with the IMO rule won’t make it as draconian as it may otherwise have been in terms of low-sulfur diesel demand,” Leathers said. “I’m of the opinion that it’s somewhere in the 20- to 40-cent [per gallon] range.”

Kristin Dziczek, vice president of industry, labor, and economics at the Center for Automotive Research, said she is concerned about how the US-Mexico-Canada Agreement (USMCA) and trade tensions with China will affect manufacturing and sales.

She said all US tariffs imposed on components of US cars raises the price of an average vehicle $2,800 and translates into 1.2 million fewer auto sales annually — a $30.5 billion hit to US gross domestic product. In particular, trade tensions with China are hurting the market for aftermarket parts used to repair vehicles.

“China is our second largest export market for US vehicles, however, so we’ve been hurt by Chinese retaliatory measures,” Dziczek said.

On the USMCA agreement, she emphasized how the agreement puts barriers on sourcing in Mexico, meaning the deal is far from “free.”

“It raises barriers to trade and anything raising barriers is going to have some negative impact on vehicle sales, prices, and employment,” Dziczek said.