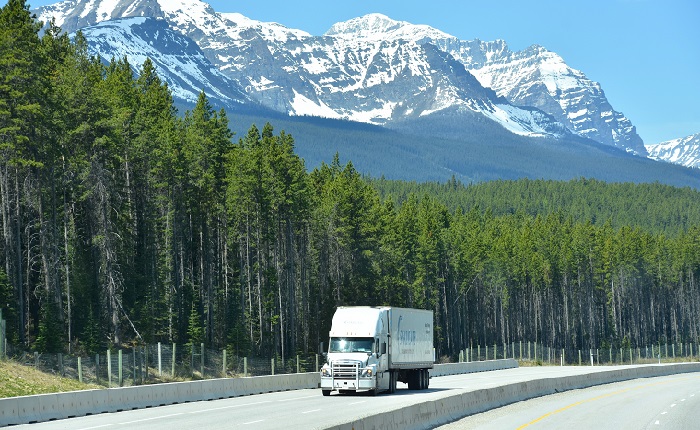 Many Canadian businesses were surprised by the breadth and depth of the electronic logging device’s (ELD’s) impact: shippers dependent on cross-border trade with the US experienced significant disruption starting Dec. 18, when the ELD rule took effect. (Above: A truck travels in Canada.) Photo credit: Shutterstock.com.

TORONTO, Canada — The US electronic logging mandate for truck drivers is affecting motor carriers, railroads, and shippers in Canada, not only those involved in cross-border trade but in domestic transportation as well, speakers and attendees at the JOC Canada Trade Conference here confirmed.

Shippers dependent on cross-border trade with the United States experienced significant disruption starting Dec. 18, when the rule requiring truckers to use electronic logging devices (ELDs) rather than paper logbooks took effect. The ELD mandate is a US regulation, but its reach extends across the US border.

For one, cross-border freight is such a large part of Canada’s core transportation business that many trucking companies here already are ELD-compliant. Their drivers must have ELDs as soon as they cross the Ambassador Bridge or any of the 78 other Canada-US truck crossing points.

But the impact doesn’t stop there. The ELD mandate has led to increased compliance with truck driver hours-of-service rules, and longer transit times and reduced capacity on US truck lanes short and long. That affects cross-border transit times, too, and is complicating deliveries within Canada.

It’s like a game of supply chain dominoes: lengthen the transit time on one leg of a shipment and the next leg is thrown off kilter. Canada already faces truck capacity constraints similar to those in the United States, and the US ELD mandate tightens that belt further and adds another layer of overall complexity.

“Trucking used to be my most commoditized, transactional business, and now it requires a completely different mindset,” Gary Fast, vice president of transportation and operations for retailer Canadian Tire said. “I’m actually sending my own trucks across the border. That’s something I’ve never done.”

Many Canadian businesses were surprised by the breadth and depth of the rule's impact — especially as it’s not their rule. “I don’t think people realized how many one-day trips were going to become two-day trips,” said Fast.

“Capacity was pretty tight, and the ELDs just exacerbated the problem.”

“Many Canadian truckers have been on board with ELDs for a long time,” said Joe Lombardo, director of transportation and network performance at Purolator, one of Canada’s leading integrated freight and parcel carriers. “However, a big proportion of our industry still has paper books.”

That will change when Canada’s own ELD mandate takes effect. Transport Canada published a proposed ELD rule in the Dec. 16 Canada Gazette that would take effect in the fourth quarter of 2019, although motor carrier compliance would be phased in from that point, probably through 2021.

“We’re two years away from that happening, and we’re going to take the US experience as an example,” said Jonathan Wahba, vice president of sales and marketing, intermodal and automotive, at Canadian Pacific Railway. He said the ELD mandate helped CP build intermodal volume but disrupted drayage.

Shippers and carriers need to begin preparing now for when the Canadian ELD mandate becomes reality. “What it goes back to is looking at your transportation plans in advance,” said Lombardo. He, Wahba, and other speakers don't expect to see capacity increase in Canada or the United States.

Today, “if you don’t have the capacity you need” for the autumn peak, “you’re probably not going to find it, unless you’re prepared to pay,” Lombardo said.

Economic events in the United States inevitably affect the US’s largest neighbor and largest trading partner. Even without the ELD mandate, the increase in US truck pricing — matched in Canada, shippers and carriers said — would exert a pull on Canadian trucking companies operating south of the border.

“We’re having difficulty getting long-haul drivers within Canada” for intra-Canadian trips, Fast said. Those drivers can make more money hauling freight to and from the United States. On the flip side of the coin, Wahba said it’s harder to find US drivers to haul freight to Canada rather than in the United States.

Those pressures from the United States combine to squeeze Canadian shippers, speakers at the conference said. “It’s going to continue to be hard to get warehouse workers and truckers,” said Ross Hurst, regional vice president for Canada at freight forwarder Expeditors. “ELDs are just part of it.”

Proactive stance toward the trucking variable in trade

Canadian shippers, like their US counterparts, are looking for ways to proactively confront the challenges of the ELD era. They’ve got a bit more time to do so. Many shippers at the conference spoke about becoming “shippers of choice” by creating more driver-friendly docks and freight.

Canadian Tire’s Fast sees a need to go farther than that. “You have to ask how do I change the mix of freight, how do I minimize shipping points,” to increase density, he said. “You’ve got to be willing to fail on a small scale and learn from the experience,” he said. Canadian Tire is “looking at everything.”

The company is increasing the size of its private fleet, now 130 tractor-trailers, to 160 vehicles by the end of the year, Fast said.

The retailer, which had C$754 million ($566 million) in revenue last year, is in the process of soliciting requests for proposals (RFPs) from truckers. “Typically, we’d put out an RFP for a year, but now it’s six months,” Fast said. “How can you know where truck pricing will be a year from now?”

The company is being “very creative” in what it asks carriers. “Tell us if you’ve got a location close to the border.” Such locations could be used as staging grounds for US-bound shipments, allowing intra-Canada drivers to drop a trailer close to the border for pickup by US drivers with maximum hours.

It’s possible more Canadian shippers will shift to relay-like business models using intra-Canadian drivers to move goods closer the border where they can be transferred to a US-bound driver who would start with a full daily schedule of hours. A similar relay model is evolving in some drayage markets.

“I’ve heard a lot of people talking about it,” said Fast, “but it’s only been since Dec. 18 that the world blew up on us.” The shakeout or transformation of the trucking market, on either side of the US border, is just starting.

Global Shipping Outlook: A Sneak Peek at 2021
Port Performance North America: Managing Cargo Flow During a Pandemic — and Beyond
END_OF_DOCUMENT_TOKEN_TO_BE_REPLACED