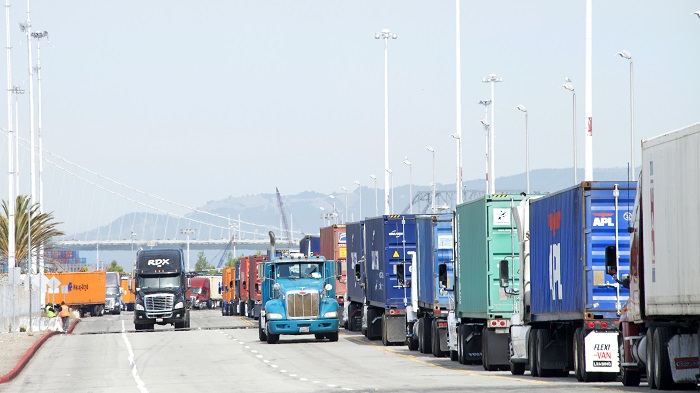 As their costs increase, harbor truckers across the United States are increasing their prices. Photo credit: Shutterstock.

Harbor trucking companies serving major gateways are increasing their prices, and gearing up to charge their customers for excessive waiting times at congested marine terminals, as they attempt to deal with rising costs and driver shortages.

For the first time since the economic recession of 2008 to 2009, drayage companies say they are experiencing little if any pushback from beneficial cargo owners (BCOs) and container lines on price hikes. “The lines are saying, ‘Let’s get this over with fast.’ They’re paying $50 to $75 more for every lane,” said Peter Schneider, vice president of TGS Transport, which has trucking operations in northern and southern California.

Trucking prices differ from region to region and within regions. For example, the average drayage rate in southern California is about $250 for a close-in location such as Carson, Nevada, and $500 to $550 to Redlands, California, more than 50 miles from the ports. Generally, truckers in various locations say drayage prices this year will increase 5 to 7 percent.

The driver shortages that have been widely reported in over-the-road trucking are at play at ports as well. “All of the outside forces are affecting drayage,” said Jeff Bader, president of Golden Carriers in Hillside, New Jersey. He said truck capacity shortages, drivers leaving the industry, and a “lack of productivity” at marine terminals are affecting drayage operators in New York-New Jersey. “They’re forcing rates up in the harbor,” he said.

Drayage companies are talking rate increases now as shipping lines enter negotiations with their BCO customers for service contracts in the eastbound trans-Pacific. US imports from Asia are the largest generator of truck moves for retailers. Imports also drive truck dynamics at the major container ports. One way or another, the trucking rate for a move from a port to a BCO’s warehouse finds its way into the all-inclusive rate that BCOs are charged by shipping lines on so-called store-door rates.

Some truck moves are paid directly by the BCOs who arrange to have their containers picked up at the marine terminals. However, over the years, larger BCOs and retailers have arranged all-in moves with the contract rate covering the cost of the ocean voyage and the dray from the port to the BCO’s distribution facility. When there was excess truck capacity in the harbors, carriers would negotiate the all-in rate with the BCOs and drayage companies would pretty much have to accept those rates. That long-standing practice drove harbor truckers crazy as they said they did not want shipping lines pricing their business.

With capacity and driver shortages rising or already present at the major gateways, a new model is emerging, at least among the larger drayage operators. As one company executive explained it, the trucker tells the shipping line and BCO its bottom line cost for moving containers to various destinations. If the BCO says that drayage operator is its “designated trucker,” the drayage company is paid that rate and the shipping line and BCO decide in their service contract negotiation how the drayage rate fits into the all-in cost.

Several developments have converged to create truck capacity and driver shortages at container ports. This in turn has given harbor trucking companies the leverage they need to increase rates. US imports were especially strong in 2017, increasing 6 percent over 2016, according to PIERS, a JOC.com sister product. Exports rose 1.6 percent, and total volume rose 4.6 percent. A federal requirement for using electronic logging devices (ELDs) to measure hours of service is restricting drivers’ hours in some port areas.

Robust imports continued in January and February in the buildup to Lunar New Year. Imports in the first half of 2018 are projected to increase 4.9 percent over the same period last year, according to Global Port Tracker, which is published monthly by the National Retail Federation and Hackett Associates. Drayage resources are already being taxed. “We’re doing everything we can. The terminals are full and the amount of freight is good,” Bader said.

However, high import volumes contribute to congestion at marine terminals. When drivers sit idle for an hour or longer, which is common, the number of “turns” they can make each day is reduced. Since the largely owner-operator force is paid by the truck move rather than by the hour, their earning power decreases. Unless the company pays them more per move, they either drive for another trucking company or they leave the industry altogether.

Ian Collins, president of Premier Transport in Tacoma who also serves as president of the intermodal conference of the Washington Trucking Association, said congested marine terminals at the Northwest Seaport Alliance of Seattle and Tacoma and on the freeways and roadways in the Pacific Northwest have noticeably affected the number of turns drivers get. Collins said that on local drays drivers used to get four to five turns per day. “Now they’re only getting two,” he said.

The new federal ELD requirement is already having an impact on mid-range hauls of 200 to 300 miles. Fred Johring, president of Golden State Express and chairman of the Harbor Trucking Association (HTA) in Southern California, said drivers used to cover that distance in one day. Now drivers are facing overnight layovers, and they are charging for that. “It’s a big increase, $300 to $500,” he said.

Harbor truckers are charging customers for excessive waiting times at congested marine terminals, or they are serving notice that they will begin to assess wait fees at terminals unless turn times improve dramatically. Schneider said turn times of greater than two hours are up noticeably in Oakland, and he is informing customers wait fees will be charged for truck visits longer than two hours.

The price of diesel fuel has gone up in the past year, and drayage companies are passing this added cost on in the form of fuel surcharges, apparently with no resistance from customers. Bader said he bases the surcharge on the average fuel prices published in the US Energy Administration diesel index for the Northeast region and he has experienced “no pushback.”

Drayage companies are experiencing increased internal costs, be it higher pay for drivers and office staff, or benefits. If they do not keep up with prevailing standards, they will lose workers. Dick Coyle, president of Devine Intermodal in West Sacramento, said the standard used to be that health insurance would begin 90 days after the worker signed on. “Now it’s immediate,” he said. Increased base wages for drivers and office staff and improved benefits “are all adding to rate pressure,” he said.

Jon DeCesare, president of WCL Consulting in Long Beach, said this is the most challenging time for truckers that he can recall since he started his career in warehousing and trucking more than 30 years ago. In addition to added costs to attract and retain workers, congestion problems that reduce effective capacity in a region and the advent of ELDs, clean-truck programs in ports such as Los Angeles-Long Beach, Oakland and Seattle-Tacoma have added significantly to the cost of compliant trucks. “A truck used to cost $30,000. Now it’s $135,000,” he said.

Existing congestion at marine terminals, which could continue if imports this year increase anywhere near 5 percent, significantly reduce effective truck capacity. Johring, citing an HTA estimate, said a delay of only one minute, when compounded by 30,000 truck moves per day in Los Angeles-Long Beach, creates a need for 52 additional trucks in the harbor. HTA numbers show that average truck visit times in Los Angeles-Long Beach are about 85 minutes, but vist times surge at certain times of the day and in high-volume periods such as peak season.

Johring said trucking companies that pay drivers competitive rates and have good relations with their customers, which means plentiful work for drivers, will do well in the current environment, but those that do not meet these requirements will fail, which will aggravate the capacity crunch even more. “The first question drivers ask is, ‘How much do you pay?’ The second question is, ‘Can you keep me busy?’” he said.