US drayage demand spiking across country

US drayage demand spiking across country 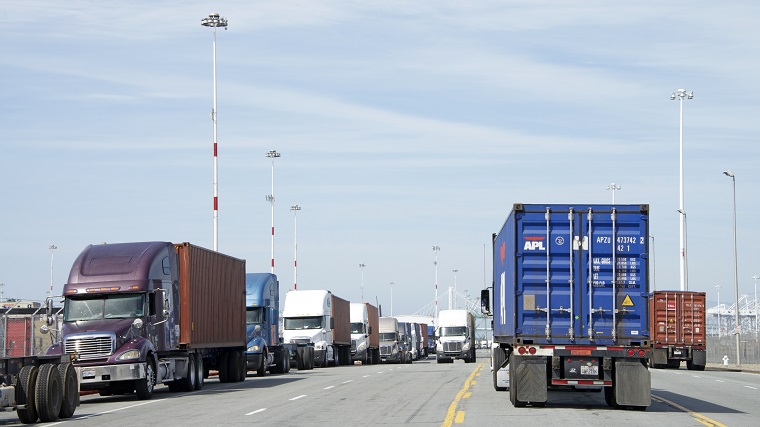 Demand for drayage has spiked in the last seven to 14 days, but no one knows exactly why beneficial cargo owners, non-vessel operating common carriers, and freight forwarders are so hungry for truck power. (Above: Trucks line up at the Port of Oakland.) Photo credit: Shutterstock.com.

US beneficial cargo owners (BCOs) enjoying a respite from winter rail delays are back into ‘scramble mode’ as drayage demand, which has been up strongly all year, has spiked in the last two weeks, according to a drayage index and interviews with shippers, truckers, and third-party logistics providers.

No one knows for sure why it is happening, but the theories include the reduction in store-door deliveries, the pickup in activity for the peak season, and the Commercial Vehicle Safety Alliance's (CVSA) Roadcheck 2018 from June 5 to 7.

The winter drayage crunch was tied to snowstorms and bitter temperatures slowing rail operations. Shippers are also stretching truck capacity thin, in general, because they are shipping more freight than last year. Through April, volume is up 7.1 percent on a year-over-year basis, according to the Intermodal Association of North America. Domestic intermodal has jumped 9 percent in the first four months of the year. The April count was up 3 percent from January and 5.7 percent in February, during the height of the congestion. The rolling four-week average of all intermodal is up 5.9 percent from 2017, according to the American Association of Railroads. Union Pacific Railroad is not taking on new domestic contracts for the peak season, leaving shippers to endure spot market rates that have doubled last year in certain markets.

Domestic intermodal data suggest there is a conversion under way from highway to rail. When comparing April against January — when rail congestion was rampant — there was a 4.3 percent drop in 40-foot container movements, but a 3 percent climb for 53-foot containers. Trucking executives believe it’s a reaction to truckload spot market rates rising 20 to 30 percent, elevated load-to-truck ratios, a decline in productivity from electronic logging devices (ELDs), and diesel prices rising about 75 cents per gallon over the last 12 months.

The Drayage Demand Index — a new metric calculated by Gross Transportation Consulting and Drayage.com — rose to 282 in the first week of June versus the baseline of 100. In early May the index was 190. The index attempts to gauge the sector by calculating the number of customer queries for services on Drayage.com collectively and by 21 individual key dray markets.

No doubt there is something happening and although nobody knows why, there are some theories.

“I think there are two factors here: increased volume and shippers having to source drayage on their own,” said Jason Hilsenbeck, founder of LoadMatch.com and Drayage.com. “Since [June 10] I have received 11 messages and typically these are from smaller BCOs. I’m not sure if their freight forwarders are unwilling to arrange the drayage or simply unable to find available drayage.”

Larry Gross, of Gross Transportation Consulting, thinks that ocean carriers backing out of store-door contracts or winding down their existing commitments might be sending BCOs into a tailspin for the final mile.

“I have no evidence of that, but you have to ask yourself, ‘what can change in a heartbeat that can abruptly change the data?’ I feel comfortable saying something has changed and I say it’s some kind of a policy on the part of somebody. It’s too abrupt and too broad,” he said.

In Atlanta, for example, Hilsenbeck’s directory peaked in the 800 clicks per day in the winter. For the last two weeks the total has eclipsed 1,000 per day. In Dallas-Fort Worth, daily click counts spiked to 800 in the winter before settling down to about 400 in the spring. Over the last few weeks, the total has jumped back towards the 800 mark. In Chicago — the largest intermodal market — clicks tripled this winter before returning to the normal 1,000 clicks per day. Today it’s back over 2,000.

Patrick Maher, executive vice president with Gulf Winds International, confirmed an uptick in business activity in the last two weeks. While it means higher revenues, he’s worried that capacity will get dicey if the trend persists into August when resin exports enter their peak season.

“The whole region, Texas, Oklahoma, and Arkansas, is seeing this, and then you put this resin boom on top of it. Shippers really need to shore up commitments to their trucking partners now, even if it means longer commitments,” said Maher, referring to the multiyear dedicated drayage contracts.

Reliable Transportation of Chicago is telling customers to provide a minimum of 10 days notice on jobs, but they are still getting last-minute requests.

CEO: Customers not aligned with a carrier will feel the most transport pain

“Customers are offering bonus money just to move their goods. I have seen up to double the normal rate on some loads and lanes,” said Kevin Lhotak, president of Reliable Transportation. “The customers that have not aligned themselves with a core carrier will feel the most pain no matter what rate is offered.”

Robert Burnsed, executive vice president of Atlantic Intermodal, said wait times are up to two weeks in Atlanta, and even though it’s not as bad as the one-month delay this winter, it’s longer than the four days in March and April.

“Some retailers let their warehouses settle for awhile after the holiday backlogs [Christmas and Chinese New Year], but I think they’re now ramping back up and building their inventory ahead of the peak season,” he said.

Rising imports through the ports could be a factor too. Total laden imports grew 3.6 percent at the port of Savannah, and 9.4 percent at the Port of Charleston. Both markets serve Atlanta through CSX Transportation and Norfolk Southern Railway.

Georgia Ports Authority executive director Griff Lynch told JOC.com that there was a 28 percent jump in intermodal traffic from the port last week, but the trend is too new to reach any conclusions.

Some Atlanta traffic is short-haul intermodal trips from Savannah. Industry executives have told JOC.com that since drayage between the Garden City Terminal and northern Atlanta is an ELD-qualifying trip and difficult to complete as a roundtrip in a single day, rail is becoming a popular option.

“The truckload industry saw a big reduction in truck capacity last week and this week it is catching up. Some of the freight converted to intermodal last week is delivering this week,” he said.

Nevertheless, these are only possible causes. And even more troubling for BCOs, there is no way to determine whether this is the beginning of a tidal wave or a minor ripple. Planning for the worst and hoping for the best might be the way shippers should proceed.

Global Shipping Outlook: A Sneak Peek at 2021
Port Performance North America: Managing Cargo Flow During a Pandemic — and Beyond
END_OF_DOCUMENT_TOKEN_TO_BE_REPLACED