US container shipping's conundrum – the chassis

US container shipping's conundrum – the chassis 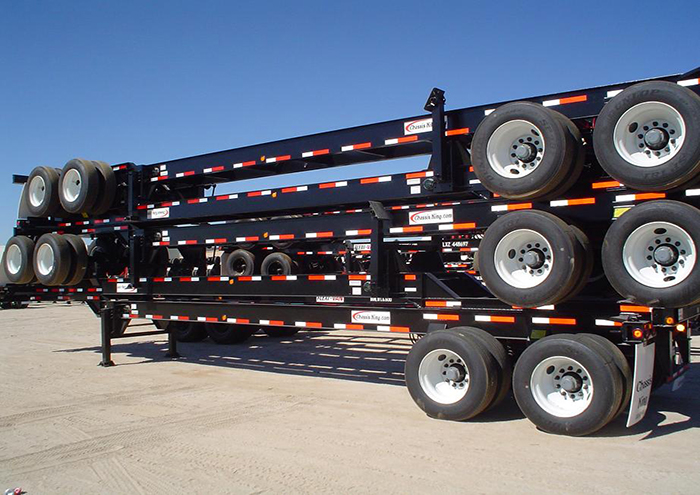 Efficient chassis usage, plus the use of sensors on chassis, would result in a more efficient use of containers as well, trade analysts agree. Photo credit: Shutterstock.


NEWARK — Intermodal equipment providers (IEPs) are improving their ability to use predictive analytics to provide sufficient chassis for importers and exporters, but equipment dislocations are still widespread because IEPs cannot predict when chassis will be returned from warehouses to marine terminals.
Supply chain logisticians are not quite where they want to be in the use of predictive analytics. Old Dominion University professor ManWo Ng tested a model to accurately forecast and meet the chassis requirements at a marine terminal in Virginia, but the bad news is it that today “it is not possible,” Ng told the JOC’s Port Performance conference Dec. 12 in Newark. “But we made a contribution. The good news is there’s room for improvement,” said Ng, who is an assistant professor of maritime and supply chain management.
Further, it is not for a lack of data on supply and demand that chassis dislocations occur at marine terminals across the country. “We have the supply-demand forecast. We have historical data. We have the start date and the location,” said Bill Shea, CEO of Direct ChassisLink, Inc. (DCLI). The problem, he said, “is we don’t know when the chassis will be be returned to the terminal.”
When retailers and beneficial cargo owners (BCO) direct truckers to haul the container-chassis units to their distribution warehouses, the equipment falls into a black hole. The equipment provider and marine terminal cannot predict when the bare chassis will be returned. A number of retailers and BCOs have financial deals with shipping lines that allow them to hold onto equipment beyond the end of the free time period without being charged a late return fee, known as per diem.
“Lines give up to 10 days. Seven days is bad,” Shea said. “Those assets are on the street. This is not an efficient model,” he said. With more than 70,000 chassis in use at the 12 container terminals and four intermodal rail hubs in Southern California, the inability of IEPs and terminals to predict when chassis will be returned takes on added complexity, he said.
The problem is further compounded by the fact that bare chassis are often returned to locations other than where the trips originated. Shea said on average about 50 percent of the chassis that leave terminals in Los Angeles-Long Beach are returned to different terminals because shipping lines have to re-position the empty containers that are mounted on the chassis to different locations. “It causes shortages at some terminals and surpluses at others,” he said.
If it were not for such operational quirks, equipment providers and marine terminals would be able to mitigate many of the chassis dislocation problems that occur, especially if equipment providers mounted sensors on all of their chassis, said Nathaniel Seeds, CEO of American Intermodal Management. “We can track the arrival at the terminal, when the container is mounted, when the container and chassis are delivered, and how much dwell time is at the customer’s facility,” he said.
Furthermore, based on historical data on chassis usage in a particular region, equipment providers probably have sufficient data with which to predict their repositioning needs, Shea said. Coupling that historical data with shipment information that carriers have when containers are loaded onto the vessels in Asia, “we know the demand three weeks in advance,” he said. DCLI uses its REZ-1 platform to predict when, where, and how many chassis will be needed at various facilities, he added.
The uncertainty surrounding when and where bare chassis will be returned results in wasteful repositioning of chassis every day. The Old Dominion research project found that at a single marine terminal in Virginia, “up to 80 percent of repositioning is unnecessary,” Ng said. Shea added that in the pool of pools in Southern California, chassis repositioning costs equipment providers $20 million a year.
Efficient chassis usage, plus the use of sensors on chassis, would result in a more efficient use of containers as well, Seeds said. Mounting sensors on containers may not be practical because containers spend much of their lives in other countries and on vessels, but the chassis is domestically domiciled equipment. Once mounted on a chassis with a sensor, the BCO can track the progress of the container until it is returned to the terminal or another location, he said.
Supply chain logisticians agree there is already available to BCOs, terminals, and equipment providers a vast amount of data, historical and real time, that if properly used would improve cargo velocity and chassis availability. “The key question is, how are we going to use this data for the customer?” Seeds said.
Trucking Logistics
International Logistics›Logistics Providers
Port News›Port Productivity
Rail & Intermodal
Technology
Trucking Logistics
North America
North America›United States
Trucking Logistics
International Logistics›Logistics Providers
Port News›Port Productivity
Rail & Intermodal
Technology
Trucking Logistics
North America
North America›United States