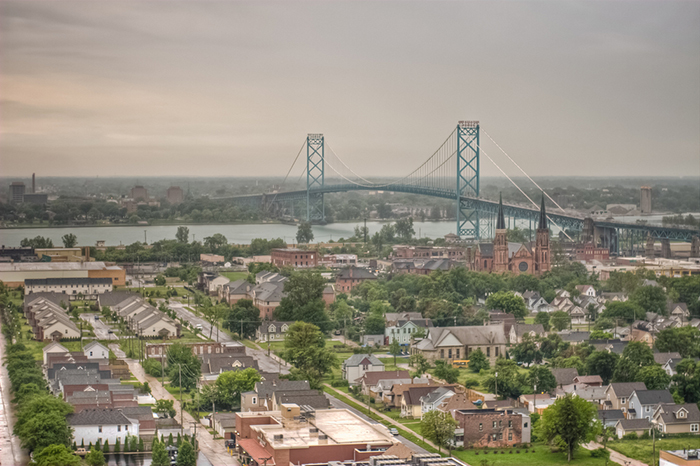 At the U.S.-Canadian border, rising truck volumes are a welcome sign of economic improvement. But an 8 percent increase in truck crossings in Detroit in the first quarter also raises concerns about the speed and fluidity of cross-border freight traffic.

“We do a preponderance of our crossings in Windsor, where’s there’s one bridge,” said Scott Dobak, president of trucking operator Dicom Transportation Group, Montreal, which owns Canadian and U.S. motor carriers. “When that bridge gets backed up, it’s just brutal.”

Construction on the Gordie Howe International Bridge, a six-lane span linking Detroit and Windsor, Ontario, designed to relieve congestion on the 87-year-old Detroit Ambassador Bridge, is expected to begin next year. But the new bridge won’t open to traffic until 2020.

Efforts are under way to use technology to speed cross-border traffic, but those tests will also take time. The U.S. Federal Highway Administration awarded $256,470 to deploy technology to provide information on wait times and give truckers advance notice of crossing conditions.

Those funds are going to projects in New York, Washington state and Michigan, where $95,920 will be used to help track car and truck traffic moving through the Detroit-Windsor Tunnel and provide that information to motorists and truckers via smartphones and in-cab devices.

Is that amount too little, too late? The latest U.S. Bureau of Transportation Statistics data on cross-border truck crossings indicate time is pressing. Total U.S.-Canada truck crossings rose 3.2 percent in the first quarter, but were up 6.2 percent at the three largest border crossings.

Those figures should get attention from shippers increasingly using Canada as a gateway to U.S. consumer markets, and manufacturers considering locating production facilities in Canada.

The first-quarter numbers were so big, in comparison with preceding quarters, he suggested they may reflect a “rebalancing” of the market. “We may be entering a world of flatline, reverse and rebound economies that give us rebound jumps that look larger than the standard growth rates we’ve been used to,” Laskowski said. “It’s a different world than we’re used to.”

The 3.2 percent first-quarter increase in truck border crossings certainly looks like a rebound. Total U.S.-Canadian truck crossings rose only 0.9 percent year-over-year in the fourth quarter, after falling 1.2 percent in the third quarter and 1.6 percent in the second quarter last year.

The combined increase at the three biggest U.S.-Canada border ports — at Detroit, Port Huron, Michigan and Buffalo, New York — was even more striking, rising from 2 percent in the 2015 fourth quarter and 1 percent a year ago to 6.2 percent in the first three months of this year.

At Dicom, border crossings were up in the low double-digits in the first two months of the second quarter, Dobak said. Those numbers were even higher in the first quarter, and were driven by increasing demand for automotive parts, components and vehicles, he said. “What we’re seeing is clearly consistent” with the U.S. BTS numbers, Dobak said. “We’re seeing slightly less traffic in the second quarter, but I’ll take that growth any day of the week.”

The number of truck crossings would be even larger, Laskowski said, “if (Canadian) factories hadn’t been shut down when the U.S. and Canadian dollar hit par” a few years ago. “Rather than ramping down from three production lines to two, we went from three to none,” he said.

The loss of that manufacturing output shifted the focus of truck traffic in Canada from north-south to east-west, especially when Western Canada’s energy business boomed. That changed again as the exchange rate dropped toward 70 U.S. cents per Canadian dollar.

In May, Canadian manufacturing output expanded at the fastest rate in almost a year, and has expanded for the past three months, according to the RBC PMI Index. “That’s an indication of how things are shifting as manufacturers look at offshoring or nearshoring,” Laskowski said.

The diversified manufacturer and shipper first announced plans to shift its Wisconsin operation to Canada last year when Congress failed to fund the U.S. Export-Import Bank. President Obama has since extended funding for the export credit agency, but GE’s move is underway.

Truck border crossings also may increase if more Canadian motor carriers are allowed to haul “in-transit” domestic shipments through the U.S. to save miles and time. An international pilot project testing the security of such in-transit shipments was launched in May.

In-transit shipments were once considered “domestic Canadian shipments” by U.S. authorities as the goods were not offloaded in the U.S. After the terrorist attacks of September 11, 2001, the U.S. began treating in-transit shipments as international moves requiring full documentation. Canada didn’t reciprocate, allowing in-transit moves by U.S. carriers across Canada to continue.

“In many cases, if you’re moving goods from Michigan to New York, it’s faster to cross the border and go through Ontario than to go a southern route through the U.S.,” Laskowski said. Canadians often can move freight from eastern Ontario and Quebec to Western Canada faster by going through the U.S., rather than traveling north of the Great Lakes.

The six-month pilot project, under development since 2014, may make the U.S.-Canadian border a little more “open” for truckers and shippers. “There was an awareness on the U.S. side that something needed to be done,” Laskowski said. “There needs to be a balance between security and trade, and achieving in-transit shipments reflect that balance.”

Currently the pilot is limited to nine trucking companies and three ports of entry/exit: Port Huron, Michigan, Emerson, Manitoba and Pacific Highway, British Columbia. The pilot program is expected to expand in November to include additional ports and more carriers.

“The border is no longer looked at as an opportunity for trade facilitation, it’s looked at as a security objective,” Laskowski said. “In that reality, we will always have our challenges.”