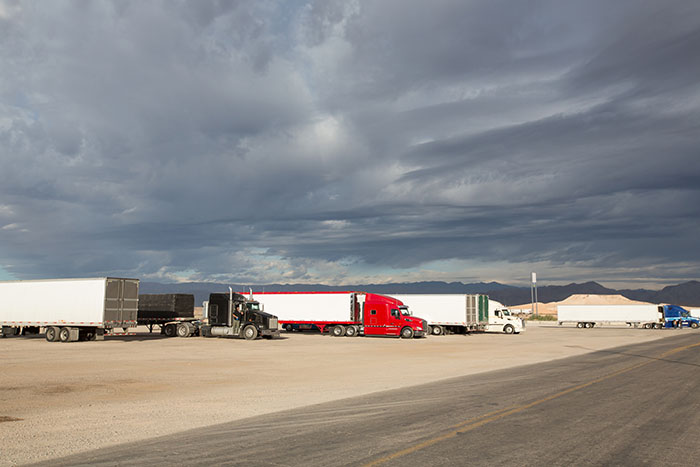 Uber is betting technology can help ensure that trucks utilize their full capacity.

LAS VEGAS — There’s a new “Uber for Trucking” company planning to disrupt the freight brokerage industry: Uber. Third-party logistics (3PL) executives at the Transportation Intermediaries Association (TIA) annual meeting here Thursday acknowledged the potential for Uber to bring change to the US freight brokerage industry, with some warning that Uber and Amazon will raise the ante for 3PLs.

“There are 17,000 truck brokerages in the United States and I guess there are two more now,” Bob Biesterfeld, president of North American Surface Transportation at C.H. Robinson, the largest US freight broker, said at the TIA Capital Ideas Conference. Biesterfeld isn’t too concerned about the prospect for disruption, but he thinks Uber and Amazon will spur changes.

“We see technology-driven freight brokerages” emerging to capture more business, Biesterfeld said during a shipper-3PL panel discussion. Uber and Amazon “are going to bring new technology into the industry and that’s very exciting.” But the brokerage businesses launched by the ride-share and e-commerce giants? Not as exciting, and not that surprising, he said, drawing analogies to other companies.

“As Wal-Mart grew, they bought a bunch of trucks,” Biesterfeld said. “Nobody freaked out about it. As Amazon grows, it buys distribution space. There are other consumer package goods companies that have freight brokerages. Pepsi has a freight brokerage.” But “when you hear names like Uber and Amazon as new industry entrants, people are going to take notice.”

And indeed they are. Uber quietly launched Uber Freight last year. The company hasn’t revealed much about its operations, but it reportedly is gaining freight shipments and expanding its test of autonomous truck technology it hopes will help differentiate its services. Amazon also is brokering truck freight to aid its massive e-commerce fulfillment operation.

“Uber is coming,” Tom Heine, CEO of Aljex Software, said during a panel discussion on transportation technology. “We all know they have plenty of money. They can hire talent and they can buy companies. Uber is going to get market share. Look at Brad Jacobs from XPO. He built up a billion dollar business very quickly. Uber has billions to spend. I figure in a few years they’ll be the size of C.H. Robinson.”

C.H. Robinson’s Biesterfeld sees it differently. “We joke that Uber is the C.H. Robinson of taxi cabs,” he said. “What Uber did in the taxi industry was disrupt a regulated business. Our industry has been deregulated for almost 40 years now. They also brought new capacity into the taxi industry,” which he said were Uber drivers' personal cars. “That’s not likely to happen in trucking,” he said.

“Uber has two different components,” Abtin Hamidi, executive vice president of Cargo Chief, said. “They’re building a traditional brokerage business and using some technology to make that easier. They also have this interesting autonomous truck business at the back of their business. Their ultimate goal is to marry these two components together and drive the marketplace.”

There were plenty of opinions about Uber at the conference, but no representative from Uber. However, Uber Advanced Technologies Group executive Anthony Levandowski, a co-founder of Uber-owned autonomous truck technology subsidiary Otto, laid down the company’s viewpoint on freight brokerage and trucking at the Transportation Research Board’s (TRB's) meeting in Washington, D.C., this January.

“Our mission is to make transportation as efficient as running water everywhere for everyone,” Levandowski said during a TRB panel discussion on autonomous trucks. “That’s not just for people but for goods and freight. Right now, it’s interesting everyone is focused on autonomous trucks, but the industry standard is phone and fax communications between shipper and carrier.

“Imagine if it took 20 phone calls to four taxi companies to set up your ride,” he said, “We believe 15 to 25 percent of truck miles are empty, and non-empty miles are 36 percent underutilized. If you think about automation, you have the possibility for utilization to be much higher,” he said. “Flexibility in the supply chain is critical. Maximizing efficiency.”

Even if Uber Freight doesn’t draw “new” capacity to trucking, there’s a lot of hidden capacity in trucking: small fleets of fewer than six tractor-trailers make up the vast majority of active for-hire trucking companies, according to data from QualifiedCarriers.com. If Uber can make it easier for those carriers to get loads, it could bring existing, available yet largely invisible capacity to light, capacity that shippers today have difficulty tapping because it’s not on their radar. And that would bring Uber Freight market share not currently claimed by other brokerages.

And Uber is chasing the long-haul truck driver. “The biggest potential [for automation] is truckload, long-haul,” Levandowski said at the TRB conference. “With the driver shortage, that’s where the greatest potential is. There’s a great opportunity for [Uber] to help small businesses find more opportunity to get greater utilization on the assets they have.”

Those small carriers and owner-operators have been a target of most the so-called “Uber for Trucking” start-ups that have entered the transportation market in the last couple of years. Some have been successful at recruitment, but none have the name recognition of Uber.

Even so, “Uber Freight isn’t going to really add capacity, or bring in new business,” Heine said at the TIA conference “They’re going to come out and compete with you guys, and they’ll probably do it a little more automated than you’re used to doing it.” He doesn’t just mean automated trucks. Like Levandowski, freight brokers see Uber pushing greater automation in transactions, eliminating e-mails, electronic data interchange, and phone calls between shippers, itself as a broker, and truckers.

“You have to focus on automation,” Jonathan Drouin, founder and chief operating officer of Haul Fox, a transportation management system provider, told brokers at the TIA conference. “Last year, broker margins were soft, and everyone said that’s going to be the new normal. You’ll have to focus on automation to change that. How many loads per person can you move is critical.”

Automation is not necessarily about eliminating jobs, but it is about eliminating inefficient processes, Brian Rudich, chief operating officer of HubTran, said. “Things like e-mail and phone calls will disappear from an operations standpoint, but not necessarily from a sales standpoint,” he said. “This is still a people business,” said Hamidi. “People want someone they can trust.”

“All of you have technology that is way ahead of the taxi business,” Heine told TIA attendees. “It’s not to hard having carriers come to your website and select loads and self-dispatch. If I were you I’d be looking at doing that because efficiency has to win. Uber will change people’s expectations very quickly. It will be easier, because people will be somewhat trained.”

The data and tools they need to compete are out there, Leonard believes. “It’s a matter of combining data using best processes and rolling up your sleeves.” Brokers that don't are likely to be left on the curb.