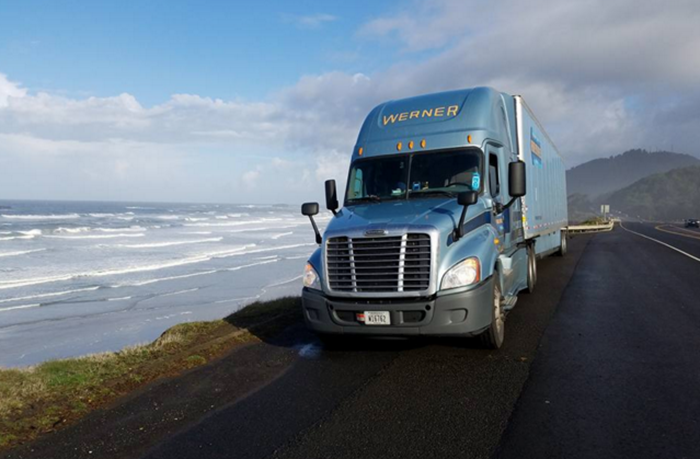 It's still too early to say whether or not higher volumes in the first quarter signal the greater demand more generally that trucking companies are expecting in 2017.

A year-over-year increase in truckload freight volume to date in April at Werner Enterprises following a seasonally “normal” March is a sign US economic activity and freight demand are both rising again, after slipping for a while in the winter doldrums of the first quarter.

Werner saw “one-way” over-the-road truckload demand soften at the start of the year, with weaker trends from late January through late February, the company said on Thursday. In March “freight improved to more normal seasonal levels consistent with the same period in 2016.”

The arrival of April, and warmer weather across much of the United States, triggered more action at loading docks and on highways. “Freight volumes thus far in April 2017 in one-way truckload have been better than the same period in April 2016,” the company said in a statement.

Heartland Express also reported an improvement in truckload volume and demand in March, in the wake of unfavorable weather in the western United States during the first two months of the year. Winter storms in part explain a drop in miles driven during the quarter compared with the 2016 quarter.

At Heartland Express, operating revenue dropped 25 percent to $129.9 million, while net profit fell 2.4 percent to $14 million. Overall profitability, however, improved, with the North Liberty, Iowa carrier’s operating ratio dropping to 85.1 compared with 87.6 in the year-ago quarter.

The uptick in demand reported by these two large US truckload operators as part of their quarterly earnings report aligns with anecdotal comments from trucking companies, freight brokers, and shippers attending recent conferences in Las Vegas and Orlando, Florida.

Several carriers at the NASSTRAC Shipper Conference April 10-12 said March was more than a good month for volume. A surge in spot market demand and rates also indicated shippers were turning to the transactional market as capacity tightened at their contract partners.

“We’re experiencing a little bit of lift in the economy,” Craig Callahan, senior vice president of sales at Werner, said at NASSTRAC. The capacity Werner allocates to the spot market is down 40 percent from a year ago, “which means our capacity is being utilized internally,” he said.

Trucking executives and analysts hoping for steadily improving demand in the second quarter should be encouraged by the 10.1 percent year-over-year gain in April in the University of Michigan’s Consumer Sentiment Index, which hit its highest reading since 2000.

The survey-based index climbed 1.1 percentage points from March to a 98 reading. The University of Michigan’s Economic Conditions Index, a measure of how consumers think the economy is doing, also improved, rising 1.8 percent from March and 8 percent from a year ago.

Economic improvement also can be seen in the addition of 4,700 for-hire trucking jobs in March, a 24,700 year-over-year job increase, according to US Bureau of Labor Statistics data. The number of jobs at carriers tracked by the BLS is up 1 percent since January.

Those 14,100 additional workers helped push the JOC Trucking Employment Index to a new high of 102.1, meaning payrolls in the for-hire sector of the trucking industry are now about 2.1 percent higher in terms of job numbers than their pre-recession peak in the fall of 2006.

“Signs of volumes finally turning positive on a year-over-year basis in April at Werner are encouraging, transportation analyst Bascome Majors of Susquehanna Financial Group, said in an investor note. Steadily improving demand, he said, could solve most of truckload’s “woes.”

Recent gains could reverse, however. University of Michigan Chief Economist Richard Curtin cautioned against leaning too hard on the indicators. He pointed to “a growing sense among consumers that the economy will experience fundamental changes” in coming years.

“It can be anticipated that optimism will commingle with uncertainty, causing uneven spending patterns across months,” he said in a statement. That uncertainty could complicate efforts by large carriers to drive contractual rate increases across the table when negotiating with shippers.