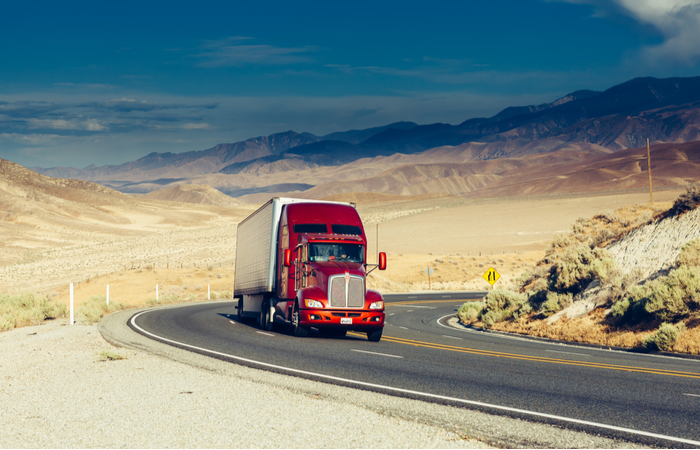 June proved the best month so far this year for US truckload carriers, but shipment volumes have dropped again. Photo credit: Shutterstock.com.

Spot truckload rates that increased sequentially in June are beginning to slip toward the summer doldrums, as the muted and late spring freight surge evaporates in the post-holiday summer heat. If nothing else, the pricing trajectory shows seasonal patterns still apply, although year-over-year comparisons remain skewed by an exceptionally strong June and July in 2018.

It's increasingly hard to look beyond the summer months — typically weaker months for trucking and freight shipping — as US trade disputes, high inventory levels, and uncertain industrial and consumer demand make longer-term projections trickier than ever. June's muted surge, and large US inventories, raise hopes a seasonal fall surge still lies on the other side of August.

Sequentially, spot truckload rates have been rising for seven straight weeks, according to the Chainalytics-Cowen Freight Indices. DAT Solutions, however, reported a 0.5 percent average drop in spot dry van rates in the week after the July 4th holiday. Those rates had climbed 5.4 percent on average in June from May after falling significantly since last year.

DAT said dry van spot rates had been climbing on its load boards for eight weeks, but the trend came to an end in the week after the July 4th holiday. Spot rates were lower in 73 of the 100 busiest truck lanes last week, the load board operator said. In June, the average dry van spot rate rose 10 cents per mile from $1.79 in May to $1.89, also the DAT average in July to date.

June rates were up sequentially based on a JOC.com survey of third-party logistics (3PL) providers and shippers paying all-in invoiced rates. Sequential average increases from May from various sources ranged from 3.6 to 8.3 percent. In July to date, however, some sources said rates were down 1.1 to 1.9 percent from June, while others still reported sequential increases of 1.7 to 5.3 percent.

The data suggest seasonality in trucking survived the massive wave of imports and high inventories that drained the freight pool truckers usually tap early in the second quarter. Compared with 2018, which saw a freight surge, front-loading of Chinese freight to avoid US tariffs, and capacity restrictions, 2019 seems more a “normal” year, a least on the highway.

Year over year, spot rates are still down, and shipment volumes lower, according to the Cass Truckload Linehaul Index. But the index did increase 0.4 percent in June from May — another sign of increased freight activity, but also a sign of how muted that activity remained. The index indicated truckload rates were 0.9 percent higher than a year ago, nearly flat with June 2018.

Although the Cass Truckload Linehaul Index may be nearly flat from a year ago, it’s still up 10 percent from June 2017, another indicator of the extraordinary strength of the surge in economic activity and truck pricing in the first half of 2018. “The trajectory on a nominal basis strongly suggests that the TL index will go negative next month,” Cass said in a statement.

It should be noted, however, that last July was the peak for US spot truck rates. The long slide from that peak began in August and should produce increasingly easier year-over-year comps as 2019 heads toward its close. However, what’s needed to push the index, and pricing, upward is stronger freight demand produced by shippers, something Cass has yet to see.

Other signs indicate “the consumer economy is still relatively healthy and that retail sales are not contracting,” Donald Broughton, manager of Broughton Capital and author of the Cass indices, said in his index report. “That said, this is a period that seasonally should be seeing much stronger volumes, which makes us cautious about the outlook for demand.”

An industrial slowdown has been blamed for some of the weakness in freight volumes this year. Although industrial production was flat in June, thanks to depressed utility demand, US manufacturing output rose 0.4 percent, fueled by a 3 percent increase in automotive production, the US Federal Reserve said Tuesday. Utilities provide power, but factories produce shipments.

US inventories rose in May

One reason freight volumes are weaker is the rise in US inventories. Retail and industrial inventories began to mount last year as importers brought freight into the US months earlier than usual to avoid Trump administration tariffs. Those goods sat in inventories for months, depressing first quarter truck shipments, and companies are still adding to stockpiles.

The higher inventory levels may explain in part why truck volumes seemed so muted in April and May, months when freight shipments are usually higher. A pre-summer inventory drawdown in June might explain some of that month’s spot market gains. Strong spot volumes reported by DAT signal that US shippers are still taking advantage of lower-than-contract spot pricing.