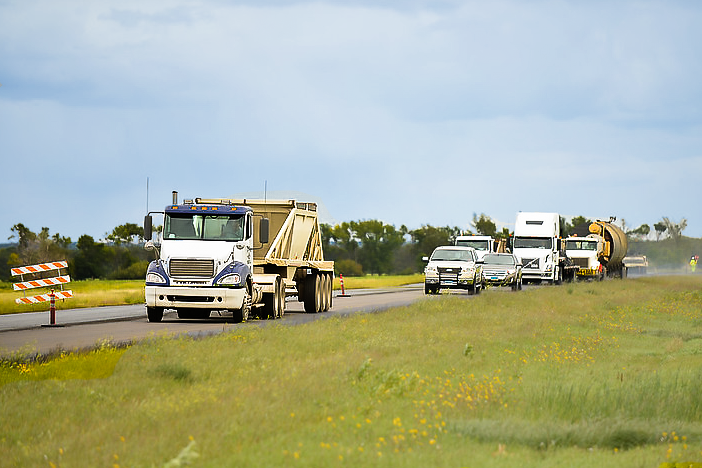 Trucking companies are bound to suffer in a US economic recession, so a strategic shipper will find ways to weather the storm together. Photo credit: North Dakota Department of Transportation.

Trucking companies will have less freight to haul as the pandemic-fueled recession spreads across the United States, but shippers of choice should tender what is available to carriers who are strategic partners, according to freight analysts.

Truckload rates may also suffer as unemployment rises, and retailers and factories respond to how social distancing affects consumer behavior, analysts said Thursday during the JOC webcast, TPM20: What We Missed — Trucking and Intermodal Outlook. Although spot truckload rates grew last month, a week-by-week analysis shows the panic buying that caused a surge in demand subsided in the final days of March.

DAT Solutions reports the monthly wholesale spot rate was up 3.3 percent compared with March 2019, and there was a 7 percent year-over-year increase in all-in truckload rates, according to a JOC analysis of online rates for top US freight lanes and checked against invoiced rates provided by third-party logistics companies and shippers. The national rate in March was the first year-over-year increase in DAT and JOC’s data since December 2018.

However, the upswing in spot rates is probably fleeting, according to industry analysts. The sudden spike of inbound rates into California and Washington in early March and New York, New Jersey, Connecticut, and Pennsylvania in mid-March slowed in the final days of the month. Rates rose more than 20 cents sequentially in March into the Northeast and Southeast, but flattened out in the last seven days of the month, according to a JOC.com analysis. DAT reported load posts in the last week of March fell 25.4 percent versus the prior week, while available truck posts rose 6.1 percent.

“We have been seeing an uptick in demand as retail stores are looking to restock shelves, but once that wave kind of subsides, which early indications show that it has or it's beginning to, things are going to get pretty bad for trucking,” said Lee Klaskow, Bloomberg Intelligence senior analyst of transportation and logistics.

Bloomberg lowered its forecast for the US economy to contract 1 percent this year, including a 9 percent to 14 percent drop in gross domestic product (GDP) in the second quarter, Klaskow said. Eric Starks, CEO of FTR Intelligence, a transportation consultancy firm, anticipates an 11 percent drop in GDP in the second quarter. Bloomberg’s third quarter economic forecast is flat to a 3 percent contraction. If the forecast proves accurate, then fewer goods will be made, sold, and transported.

“There's going to be significant and lasting economic damage that comes from this. I don't think we're going to be able to very quickly put all these folks that are losing their jobs back to work. We’re going to have a significant number of small and medium-sized businesses that don't reopen their doors, and it's going to take some time to heal from that,” said Jack Atkins, an industry analyst with investment bank Stephens Inc. “I think it's going to be a very, very challenging time.”

“The polar vortex and the ELDs [electronic logging devices] had a major impact, but this is the biggest impact we've seen in all of our lifetimes,” added Jeff Tucker, CEO of Tucker Company Worldwide, a third-party logistics provider.

Being a ‘good shipper’ during a recession

Jennifer Boukal, international supply base manager with Deere & Company, the manufacturer of John Deere products, said despite weak demand today, she remembers the tight capacity of 2018.

“We are working with our partner carriers to make sure that we see how their health is, what the downturn is doing to them, and to try to make sure that we help them weather the storm,” Boukal said in the webcast. “We also want to be there when things start to come back, so that we're not left in a lurch like everybody was back in 2018.”

John Janson, director of global logistics with SanMar, said one way to help is to tender freight to core carriers that have been partners in all business environments. The custom apparel maker has seen a decline in business with few events being held, so it has shifted to producing face masks during the coronavirus disease 2019 (COVID-19) pandemic.

“We have a smaller piece of business out there, so let's make sure that we're giving it to those core providers who were meaningful before, to make sure those folks are getting our business today,” Janson said. “When we come out of this — and we will — we want to make sure we're also meaningful to them on the way back.”

Janson, who in the past has enacted shipper of choice programs that focus on the driver experience in SanMar distribution centers, said there are some unique concerns carriers can address in a recession.

“We are thinking about how we can try to make [a recession] not as impactful as it has been in the past,” he said. “We are working with motor carriers to avoid some of the costs with detention. And as things have slowed down and trailers stack up, we're working to mitigate some of those costs as well.”

When will demand turn around?

Previous forecasts of truckload demand and rates for 2020 are no longer feasible, according to industry analysts. Starks predicted on a March 24 webinar hosted by Stephens Inc. that the truck market won’t return to pre-coronavirus levels until the second quarter of 2021. Atkins agreed that if the Great Recession of 2008-2009 is a barometer, the trucking industry will not recover until next year.

“There will be differences, and no one really knows how any of this is going to play out, but I think it's informative to go back and look at that particular comparison” Atkins said. “It really wasn't until the second quarter of 2010 before we saw truckload rates, both spot and contract in aggregate, turn positive for the public truckload carriers in terms of rates per loaded mile.”

Tucker said trucking and logistics providers should expect many twists and turns for the foreseeable future.

“Whoever you are, you're going to have to get used to new norms changing on a monthly or every-couple-[of]-month basis. Companies will start up new production, stop production, go back to their original production,” he said. “There are going to be all kinds of interruptions and changes and we just can't get used to anything in the next year or a year and a half.”

Trucking costs rising nationwide amid shift to contract: US Bank

How to Improve OTIF: 15 Tips for On Time and In Full Delivery
END_OF_DOCUMENT_TOKEN_TO_BE_REPLACED