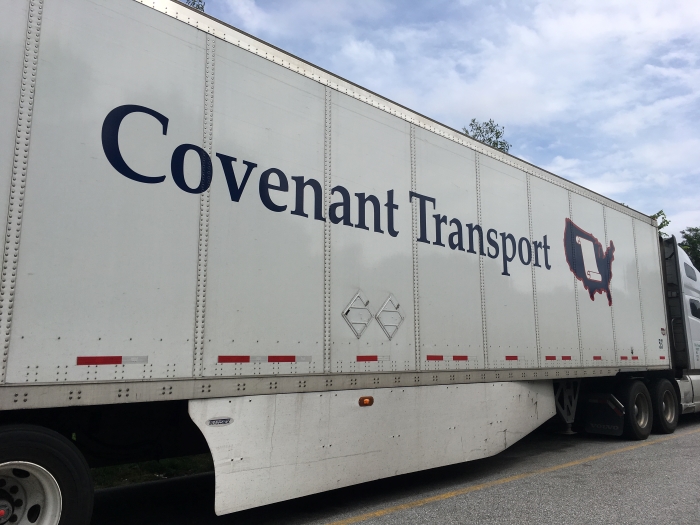 Large truckload carriers, including Covenant, say they are reallocating capacity to the most profitable freight. Photo credit: Ari Ashe.

Large US truckload carriers made deeper cuts in their Class 8 truck capacity in the fourth quarter, driving the JOC Truckload Capacity Index (TCI) down 110 basis points from the third quarter and 200 basis points year over year to 85.2. That’s the third consecutive quarterly drop in the index and the largest decline since the capacity yardstick peaked in the 2019 first quarter.

The index went negative year over year in the last quarter for the first time since the second quarter of 2017. It’s a signal that large truckload carriers are making an effort to rein in excess capacity that crippled their ability to raise rates in 2019. The index carrier group cut their capacity 2.3 percent year over year, compared with an 0.7 percent increase in the third quarter.

That’s a significant cut for the carrier group included in the index. FTR Transportation Intelligence expects total truck capacity to drop 1.4 percent in 2020. Trucking executives are counting on trucking bankruptcies and closures, combined with falling truck production, to reduce excess capacity, but it’s not clear how quickly that will happen, or if it will happen at all.

Capacity may remain relatively “loose” until freight demand climbs significantly. The impact of the coronavirus (COVID-19) in China and beyond creates uncertainty, but “any potential issues from a [freight] surge are likely to be short lived because of the excess capacity available across freight modes as the year begins,” Todd Tranausky, vice president of rail and intermodal at FTR, said in a statement Monday.

Even with large truckload companies cutting trucks, a massive amount of capacity entered the truck market in 2019. The total number of power units or tractors used just by active, for-hire motor carriers jumped 20.8 percent in 2019 to nearly 3 million, according to an analysis of Federal Motor Carrier Safety Administration data by Tucker Company Worldwide.

And despite trucking bankruptcies, the number of active for-hire fleets, both truckload and less-than-truckload (LTL), rose 4.5 percent last year from 2018 to 246,041, according to the analysis. Tucker counts as active fleets only those trucking companies that have operating authority and insurance and meet all legal requirements to be hired to haul freight.

And despite the 2.3 percent year-over-year drop in the fourth quarter, the JOC Truckload Capacity Index remains elevated, higher than at any point between 2009 and 2018. That makes it difficult to envision a severe tightening of capacity absent a significant demand trigger.

“I expect the operating environment in the first half of 2020 to continue to be challenging, with continued softness in US manufacturing and readily available truck capacity,” Landstar System president and CEO Jim Gattoni said during a Jan. 29 earnings call transcribed by Seeking Alpha. “I expect capacity could tighten later in the year as trucks leave the market.”

Landstar, one of the companies in the JOC index group, reduced the capacity provided by its owner-operators 1.9 percent sequentially in the fourth quarter and 3.4 percent year over year. But the carrier will add capacity when it lands the right business. “Landstar remains focused on profitable load volume growth and increasing capacity to haul those loads,” Gattoni said.

Gattoni expects rising trucking insurance premiums and jury awards in truck accident cases to put more pressure on small carriers and the capacity they provide. “It’s not even the large verdicts,” he said. “Even where you thought you had a fender bender, next you know it cost a couple of million dollars. What’s that going to do to capacity over the next six months?”

“There’s no doubt that capacity is leaving the market,” and has been doing so for six to eight months, David Parker, CEO of Covenant Transportation Group, another index group carrier, told Wall Street analysts in a Jan. 24 earnings call. “I think it’s maybe even going to leave a little bit faster, so we’re not being bombarded by our customers for [pricing] decreases overall.”

Covenant cut capacity by 4.2 percent year over year, but added a small number of tractors in the fourth quarter. “In our Truckload operations, we are seeking to tighten our one-way irregular route Truckload freight network, to reallocate capacity from solo-driven refrigerated to more profitable dedicated and dry-van opportunities,” Parker said during the earnings call.

But even as some trucking companies leave the market, others are hitting the highway. “We added almost as many carriers in 2019 as we lost, and just because we lost a carrier, that doesn’t mean the capacity has all been lost,” Avery Vise, vice president of trucking research at FTR Transportation Intelligence, told the SMC3 Jump Start 2020 Conference Jan. 27.

Beyond simply parking or not replacing trucks, trucking companies such as Covenant Transportation are concerned with better utilizing their existing capacity where it will return the biggest profit. For example, all the companies in the JOC index group that offer dedicated trucking services added trucks to that business line in the fourth quarter and in the full year.

The JOC TCI provides actual — rather than anecdotal — evidence that truckload capacity, as measured by truck counts at large carriers that haul large volumes of freight for shippers, is beginning to drop, even if the overall reduction in truck counts in the JOC TCI group is small. But the truck capacity U-turn these motor carriers made in 2019 was both sudden and sharp.

Throughout 2018, the JOC TCI climbed 7.1 percentage points as the carriers in the index group increased their actual tractor counts by a combined 8.9 percent. But the publicly owned for-hire trucking companies in the group, which reported more than $6 billion in combined truckload revenue in 2018, cut their truck counts 2.7 percent in the last three quarters of 2019.

The TCI represents change in tractor count at a group of companies fielding more than 23,000 tractor-trailers, and is meant to capture and measure changes in capacity at large contract carriers, and may not reflect trends at mid-sized companies and smaller truckload fleets, which in many respects are a different operational segment of the overall trucking market.