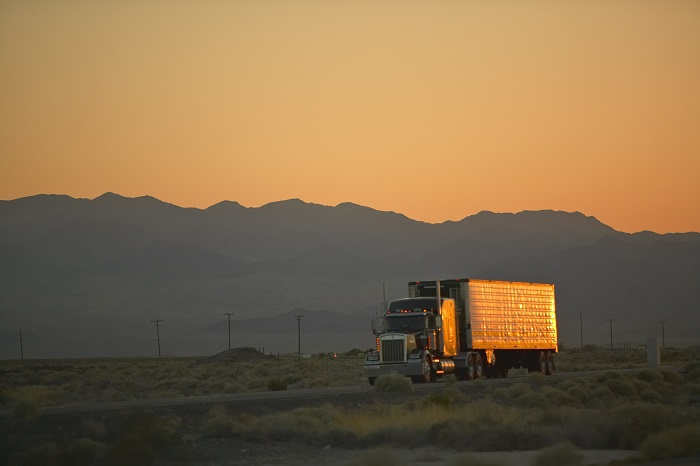 DAT and Truckstop.com report that dry van rates have spiked as the new “spring peak” season picks up pace. Furthermore, truckers expect pricing and volumes to stay on an upward track through autumn. Photo credit: Shutterstock.com.

If there is a freight slowdown ahead, it is not evident on US highways. Spot market truck freight volumes may have dipped a bit in February from an unusually strong January, but as April began, spring retail and produce demand tightened pressure on capacity and rates.

The average US truckload dry van spot market rate jumped 10 cents in the just first few days of April, hitting $2.25 per mile by Wednesday, said Mark Montague, industry pricing analyst at DAT Solutions. When it comes to spot truck rates, “I think we’re on a rise through June,” he said.

Truckstop.com is seeing record-setting volumes moved through its spot market load boards and steeper rate hikes, said Trent Broberg, general manager at the load-matching and technology company. “In March, we saw rates climb about 5 cents every week,” he said.

“We saw about a 10 cent jump in the first days of April,” Broberg said. In terms of truck freight volumes, “every day seems like a new peak.” Truckstop.com has seen daily load volumes hit the 600,000 to 800,000 range, he said. “There’s continued tight capacity.”

“I’ve heard of more and more companies, the larger 3PLs [third-party logistics providers] even, creating specific departments focused on partial shipments,” he said. In terms of capacity procurement, “they’re adding value back to their shippers with multimodal solutions, putting more arrows in their quivers.”

Spring, trucking companies have said for several years, is the new autumn, meaning a new shipping peak, as spring and early summer retail demand, holidays from Easter and Memorial Day to the Fourth of July, and the beginning of produce season generate higher freight volumes.

Add an uptick in construction and in oilfield work, and demands on truck capacity get tougher. As the weather warmed up in March, “flatbed came back with a vengeance,” said Charles W. “Chuck” Clowdis Jr., founder and managing director of Trans-Logistics Group.

“They [flatbed carriers] are getting the biggest increases we’re seeing,” Clowdis said. “They’re probably getting twice as much as some dry van carriers. Construction is up, everything is up.” US Census Bureau data show housing building permits up 6.5 percent year over year in February. Expectations are rising too. About 83 percent of the truckers polled by Truckstop.com and Bloomberg Intelligence in the first quarter expected volumes to rise in the next six months, according to Lee Klaskow, senior transportation and logistics analyst at Bloomberg Intelligence.

That optimism is fueling Class 8 truck orders. Net orders for heavy-duty trucks nearly doubled in March, according to ACT Research and FTR Intelligence. IHS Markit predicts 2018 will be a peak year for Class 8 truck sales. Class 8 retail sales in the United States will hit 241,000 this year, said Antti Lindstrӧm, principal automotive analyst for IHS Markit, which also owns JOC. “Sales will reach the same level in 2019 and climb to 249,000, but we’ll see slowing after that,” he said. IHS Markit forecasts 238,000 Class 8 truck retail sales in 2020.

Truck orders are “a nice indicator of sentiment about where the market is headed, but you can always cancel orders” if the economy slows or drivers are not available, Lindstrӧm said.

A shortage of qualified drivers has been cited as a factor in tightening truck capacity, but US Department of Labor numbers show for-hire trucking employment rising since August on a monthly basis. Trucking added 6,700 jobs in March, the Bureau of Labor Statistics (BLS) said Friday. Preliminary seasonally adjusted employment data show trucking employed 22,900 more people in March than a year ago — although not all of them were drivers — a 1.6 percent year over year increase.

The revised JOC For-Hire Trucking Employment Index rose from 101.7 to a 102.2 reading. That puts employment at for-hire carriers about 2.2 percent higher than in the fourth quarter of 2006, the pre-recession base for the JOC index. A year ago, the reading was 100.6. It fluctuated between 100.4 and 100.5 for most of the year, before rising last autumn as freight demand rocketed.

The index indicates trucking companies are finding new recruits and expanding payroll even as the national unemployment rate remains a low 4.1 percent, near the level most economists consider full employment. Rising per mile pay and benefits for drivers may explain why.

Data released Friday by the labor statistics agency show average weekly pay in transportation and warehousing, including but not limited to trucking, rose 3.1 percent year over year in March. Driver pay appears to be rising more sharply, based on reports from carriers.

Those pay hikes will create more pressure for higher compensation and rates in transportation, especially if economic growth remains on track, as is forecast for the remainder of 2018.