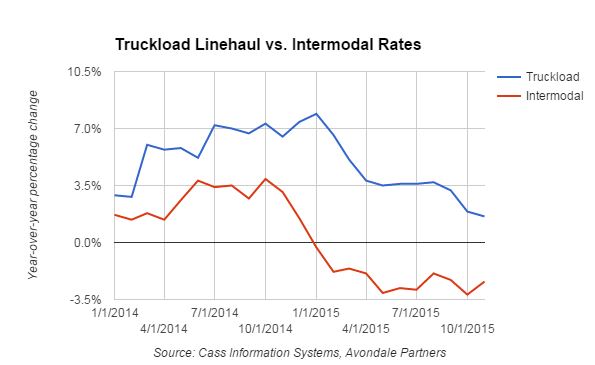 The freight payment company and investment research firm don’t expect the trajectory of either index to change anytime soon, thanks partly to slower demand and low diesel fuel prices.

Although high inventory levels and truck sales, as well as driver pay increases and the suspension of some hours-of-service rules have led to more available truck capacity, Avondale expects truckload linehaul rates will continue to rise in the 1 to 3 percent range in 2016.

The intermodal index dropped 2.3 percent in September and 3.2 percent in October.

On average, the retail price of diesel fuel in the U.S. was 32 percent lower in the first 11 weeks of the 2015 fourth quarter than in the same period of 2014.

Cass’s Freight Shipment index in November, based on a different set of data, recorded its lowest reading since 2011 with freight shipments down 5.1 percent year-over-year.