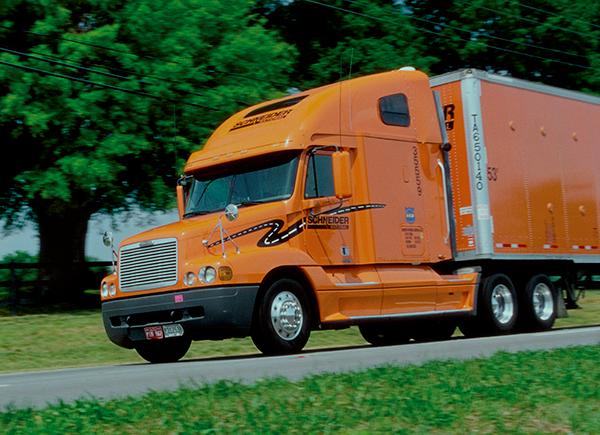 Schneider National is No. 2 in the JOC’s ranking of the Top 25 Truckload Carriers in 2013.

When it came to expansion, the 25 largest truckload carriers idled their engines last year, increasing their combined revenue by just 0.6 percent to $25.6 billion. The growth they did enjoy came largely from acquisitions, a trend expected to continue in 2014 as truckload demand rises.

Among the biggest truckload acquisitions in 2013 was the purchase of Gordon Trucking by Heartland Express in November for $300 million in cash, assets and debt. The acquisition gave Iowa-based Heartland a stronger presence in the West and significant capacity and revenue-generating business.

Swift Transportation, the largest U.S. truckload carrier, increased truckload revenue only 1.5 percent to $3.1 billion, according to SJ Consulting Group, which prepared the Top 25 Truckload Carrier rankings. However, Swift also acquired Central Refrigerated, No. 21 on the Top 25 list, for $225 million in cash and debt in August, boosting its temperature-controlled truckload business.

Most trucking acquisitions in 2013, however, were small transactions involving small or midsize companies, typically acquired by a larger buyer interested in gaining a new line of business, new territories or lane density and, most important, qualified truck drivers.

Celadon Trucking, for example, acquired nine companies in 2013, according to SJ Consulting, typically buying the assets and hiring those drivers that meet its qualifications. Celadon’s most recent acquisition was N. Yanke Transfer in Saskatoon, Saskatchewan, a Canadian over-the-road and intermodal carrier with about $90 million in revenue; the Indianapolis-based company made the purchase in November.

Russel Marcoux, president and CEO of Yanke, retired as he “passed the torch” to Celadon. He’s not the only owner of a small carrier looking for an exit from an increasingly costly business. For small business owners, a larger partner or buyer can rescue an otherwise financially strapped carrier.

The alternative increasingly is parking trucks and shutting down. The number of motor carrier bankruptcies surged in the fourth quarter, rising to 335 fleets, the highest number since 2010, according to Avondale Partners. Bankruptcies last year took more than 20,000 trucks off U.S. highways.

Rising bankruptcies among smaller fleets and tight capacity at the largest carriers could prove a bitter pill for shippers, leading to higher truckload rates if freight demand rises as forecast this year.