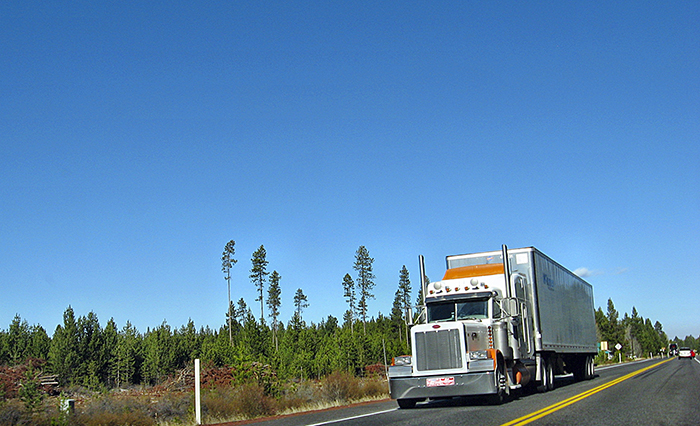 Trucking pricing has been volatile in the past few years.

Shippers looking to shield their companies from rising truck rates soon may have a new option: a futures exchange designed to help them hedge against sudden swings and surges in pricing. Craig Fuller, a scion of the Chattanooga trucking family that founded U.S. Xpress Enterprises, hopes this summer to add truck pricing futures to the long list of derivatives traded by investors.

The goal is to give not just US shippers, but trucking companies and logistics operators a way to manage fluctuating truck pricing and costs through a derivatives exchange not unlike those that currently trade futures in commodities and derivatives that include pork bellies, oil, coffee, soybeans, and the dry bulk freight rate futures traded on the International Maritime Exchange.

“Rates are incredibly volatile in tight markets. There’s really no way for companies in the business to hedge and mitigate risk,” said Fuller, CEO and managing director of TransRisk. “We’re trying to give carriers, shippers, [and] 3PLs the tools to manage that rate regardless of what the market does, so they protect themselves in down markets and in up markets.” The exchange could offer short- and long-term futures.

TransRisk, a subsidiary of Fuller company TransFX, will be the exchange. Fuller plans to take the exchange live once it receives approval from the US Commodities Future Trading Commission. “Our hope is to have [the exchange] up by late summer,” he told JOC.com. “We already have had Fortune 500 companies reach out to us, and three of the top 10 carriers.”

The exchange could hit the market at an opportune time. After rising rapidly in 2014 and slumping during 2015 and most of 2016, truckload rates are primed to rise again. A healthier economy and expectations of tightening truck capacity in the latter half of the year are driving many shippers to open early negotiations this year on annual contracts that cover truckload pricing.

Shippers are looking for ways to control costs and manage pricing, whether through closer collaboration with their transportation partners, putting more or all of their freight lanes out for bid more regularly, or looking at new transportation management systems that allow for more dynamic pricing or provide greater amounts of data they can use in contract negotiations.

With data from TMS and other systems, “we’re better armed going into negotiations than we’ve ever been,” Brian Morgan, senior director of logistics and process excellence at Leviton Manufacturing, said at the NASSTRAC Shippers Conference in Orlando on April 11. That knowledge may help shippers identify potential savings, but it won’t restrain market rates.

“Contract rates today are fixed rates, but they’re not really that firm,” Fuller said. Most contracts include clauses that allow either party to withdraw within a specified time frame. And on the spot market, “there’s no way they [shippers] could manage the volatility transaction by transaction. During a surge ... [spot] rates would be much higher than their contract rates.”

Hedging on a futures market is a way to mitigate risk by accepting some risk. Futures trading grew out of agricultural markets, where they helped farmers hedge against seasonal price swings in crops. The expansion to commodities and financial derivatives followed. Many airlines and trucking operators use fuel hedging to limit exposure to rising energy costs.

That underscores one of the risks of hedging — that prices will drop below the locked-in floor set by a futures contract. Airlines and trucking companies that hedged against rising fuel prices in 2014 were stung by the steep drop in fuel costs in 2015. Some companies, such as American Airlines, stopped hedging fuel, but others adjusted their hedging strategies and kept buying futures.

Data and anecdotal reports indicate truck freight volumes are rising, with rates lagging them. The Cass Freight Shipments Index, trending upward since October, rose 0.9 percent year-over-year in March. The Cass Expenditures Index, which measures shipper spending, was up year-over-year as well, climbing 3 percent in March after hitting five-year lows in 2016.

At the NASSTRAC Shippers Conference, speakers pointed to the rapid growth in truckload spot demand as a sign of tightening contract capacity. “Freight has continued to increase in hitting our load boards,” Brent Hutto, chief marketing officer for Truckstop.com, said during a panel discussion. “Year-over-year, freight volumes are 50 to 60 percent higher,” Hutto said.

“That’s a pretty significant increase in freight moving to the spot market, and that means capacity is [getting] tight,” he said. “As 2018 closes in, capacity is going to get tighter and tighter,” especially as trucking operators struggle to comply with the federal mandate to use electronic logging devices to record truck driver hours of service, which falls on Dec. 18.

“It’s predicted the ELDs will produce a 2 to 4 percent shortage” in capacity, Hutto said, although he noted “it’s going to be temporary.” That shortfall will mostly be a result of reduced productivity as carriers strive to better utilize equipment and drivers. Even a “soft” ELD landing would create more volatility, however. Truck capacity today is adequate, but not necessarily abundant.

Competing load matcher DAT Solutions Industry Pricing Analyst Mark Montague said last week spot truck rates were beginning to rise at a faster clip as the second quarter got under way, “although contract rates are not catching up yet” with freight demand. Dry van loads on DAT load boards increased 47 percent month-to-month in March. “Shippers need to start planning for a changed environment,” he said.

“It seems that trucks are always available right now and that keeps rates at a break even,” Rob Kemp, president of K-R Sales and DRT Transportation, told NASSTRAC. However, he added that capacity “is almost at equilibrium at times. We had a big snowstorm in the Northeast in March and capacity suddenly was tight. Any little tick and capacity starts to go upside down.”

All that is why shippers interested in protecting themselves from such “little ticks” might think hedging against freight rate hikes this fall is a good idea. “What we’re trying to do is provide the tools for people to have floors and ceilings,” Fuller told JOC.com. “If you’re a carrier you want to have a floor, if you’re a shipper you want a ceiling.”

TransRisk is not taking all the risk alone. The company has partnered with DAT Solutions, using the load-matching service’s historical truckload spot rate database as the basis for its futures contracts. TransRisk says the DAT RateView data will help it “normalize” the risk posed by pricing fluctuations. TransFX also received $2 million in backing last September from Dallas-based Hunt Technology Ventures.

The end result of a futures exchange, Fuller hopes, will be more transparency in pricing, whether a shipper moves freight under contract or on the spot market. “The commodities futures markets were set up to provide transparency in price, and more predictable transparency,” he said. That transparency would gives shippers visibility not just in freight tracking, but into the direction freight costs are heading, real-time.

If so, that's a hedge with a valuable edge.