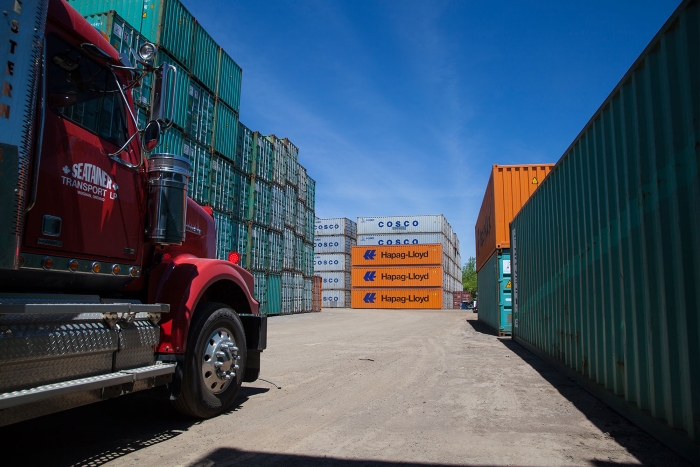 Gusgo Transport and its subsidiaries haul marine containers within a 500-mile radius of Toronto, in the US and Canada. Photo credit: Gusgo Transport.

Gusgo specializes in cross-border container transportation within a 500-mile radius of Toronto, including points throughout Ontario and Quebec in Canada and New York, Pennsylvania, Ohio, and Michigan in the United States. The transaction, announced Friday, adds Gusgo to TFI’s specialized truckload division. Terms of the deal were not disclosed.

Canada’s largest truck transportation holding company has been driving growth through acquisitions that add to total revenue while diversifying and expanding its geographic footprint. Increasingly, those acquisitions are in the US or the cross-border business.

In March, TFI acquired R.R. Donnelley’s Courier Services business, which includes a network of nearly 30 company locations and over 400 vendor sites serving the pharmaceutical, healthcare, retail, financial, and transportation industries, primarily in the Midwest and Southeast US.

Based in Montreal, TFI operates more than 80 companies in the package and courier, less-than-truckload (LTL), truckload, and third-party logistics sectors. Its subsidiaries include LTL carrier TST-CF Express in Canada and US truckload carriers CFI and Transport America.

The company’s truckload division includes 13 conventional truckload carriers and 31 specialized carriers, with the addition of Gusgo. The new acquisition gives TFI access to a fleet of 250 chassis, 52 tractors, and a storage site that accommodates 6,000 containers.

TFI’s appetite for acquisitions this year will be curbed by the coronavirus disease 2019 (COVID-19), CEO Alain Bédard told investment analysts in an April 22 earnings call transcribed by Seeking Alpha. However, the holding company will look for smaller “tuck-in” opportunities.

“We’re not going to do any major deals in 2020. It’s too risky, okay, not knowing how long this virus is going to be with us,” Bédard said. TFI completed a $230 million public offering in the US in February, saying the proceeds would mainly be used to pay down debt.