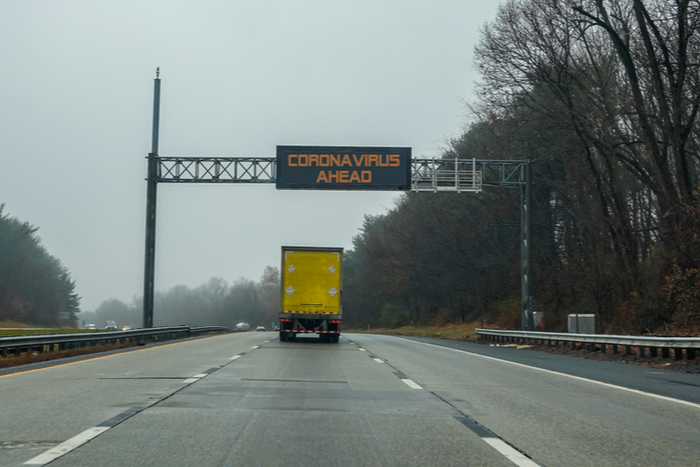 Some of the largest trucking companies believe the US economy 'has hit bottom,' but recovery may be slow, according to IHS Markit economists. Photo credit: Shutterstock.com.

The head of the largest US truckload carrier is looking past the coronavirus disease 2019 (COVID-19) pandemic toward a recovery and a US transportation landscape perhaps utterly changed by the end of 2020.

Truck capacity will become scarce again, putting pressure on truckload rates, predicts David A. Jackson, president and CEO of Knight-Swift Transportation Holdings, after the expected collapse of thousands of smaller carriers and the migration of their drivers to larger trucking companies.

“I’m very positive about how things go beyond this,” Jackson told JOC.com last week, as several states worked on plans to reopen at least portions of their economies and roll back social distancing guidelines and requirements.

Jackson hopes for an economic rebound late in the second quarter, or perhaps by July 4. “With all the stimulus that’s been done, consumers are hanging in there,” he said. “Even though unemployment has gone up, there's been enough assistance that I think we can still see a strong rebound coming out of this if the consumer is in decent shape.”

Whether Jackson’s hopes can be realized, however, depends on how the US government, states, businesses, and consumers handle multiple challenges in the months ahead. The economic consensus is for a slow recovery from a deep, if short, recession. That recovery may prove almost as challenging to shippers and transportation suppliers as the recession.

“We do not expect real GDP growth to turn positive until the fourth quarter of this year, reflecting our view that economic activity will not begin to improve materially until new US cases of the COVID-19 virus are driven down substantially,” IHS Markit said April 16.

As of Monday, the number of confirmed US COVID-19 cases was approaching 1 million, although the number of daily new cases had dropped for three days, falling from approximately 36,200 cases on April 24 to 26,731 cases April 26, according to data from John Hopkins University.

However, Jackson’s optimism for a more “V-shaped” trucking recovery isn’t based just on instinct, but on past experience. “This disaster is almost a mosaic of things we’ve seen in the past 40 years of deregulated trucking, but this go-around they’re occurring all at one time,” he said. When businesses restart, they’ll need truckload capacity, especially retailers, said Jackson.

Knight-Swift, which had $4.8 billion in total revenue in 2019, saw that line item drop 6.6 percent year over year in the first quarter to $1.1 billion. Trucking revenue, excluding fuel surcharges, dropped 5.1 percent. Net and operating income fell, but the company’s trucking subsidiaries had healthy profits, posting a combined adjusted operating ratio of 86.5 percent for the quarter.

“I think we’re at the bottom now, and I think it continues here a while,” Jackson said. “For trucking, the difficulties started in March and we’re feeling the worst of it in late April and into May. The next three weeks are not going to be easy. There’s going to be a lot of competition for what freight volume there is out there. But the runway after this is quite long and quite unique.”

Unique, but not in a good way

“Unique” is an apt word for current circumstances. “The speed with which the freight environment deteriorated in the beginning of the second quarter was like nothing experienced in the history of the company,” Landstar System president and CEO Jim Gattoni said during a first-quarter earnings call Thursday, transcribed by Seeking Alpha.

Landstar, the fifth-largest US truckload carrier by revenue, felt the economic deterioration quickly this month, in part because its business is more closely linked to the US manufacturing sector than most truckload competitors. That compounded a 10.3 percent year-over-year drop in first-quarter truck transportation revenue from record highs in the same period of 2019.

“It is safe to say that nobody knows the depth of the impact the pandemic will have on the freight transportation industry or how long this current crisis will last,” Gattoni told Wall Street analysts. “We expect a very difficult freight environment during the second quarter with vital manufacturing plants (closed) and shrinking industrial and consumer demand.”

For Greg C. Gantt, president of less-than-truckload (LTL) carrier Old Dominion Freight Line (ODFL), the rapid spread of COVID-19 in March and the resulting stay-at-home orders and widespread business closures created a sharp rupture with the immediate past. “First quarter seems like a distant memory at this point,” Gantt said in an earnings call Thursday.

In the first quarter, ODFL’s shipments per day were down 5.1 percent year over year. By late April, however, LTL volume was down about 20 percent year over year, the company said. LTL carriers are believed to have taken a harder hit in April than their truckload competitors, both because of higher fixed operating costs and their reliance on industrial freight shippers.

“Many of our customers are currently closed,” Gantt said. “As a result, our volumes dropped off pretty significantly at the beginning of April, but they have remained fairly steady ever since. This has allowed us to quickly adjust to our new daily shipment counts.” ODFL has seen shipment weights rise even as volume drops as its freight mix shifts toward essential goods.

“You had customers that were just trying to use capacity in any way they could,” ODFL’s CFO Adam Satterfield said. “And so maybe some heavier loads came our way.” Shippers may have shifted what typically would be truckload shipments to volume LTL as truckload capacity tightened in March, or with an eye to ensuring delivery within a set time frame.

ODFL revenue dropped 0.3 percent in the first quarter to $987.4 million, while net profit dropped 0.1 percent to $133.2 million. By contrast, in April to date, the company’s revenue per day has been down about 20 percent year over year, Satterfield and Gantt told Wall Street analysts, as freight volumes tumbled down the economic equivalent of a runaway truck ramp.

That drop in LTL volume is similar in scale to that reported by other carriers and LTL brokers, including third-party logistics (3PL) provider Echo Global Logistics. The 3PL’s brokered truckload volumes were down 4 percent year over year in April, but brokered LTL shipments fell 24 percent, Echo executives said in a first-quarter earnings call last week.

Trucking companies large and small are focused on getting through the next month or two. Many companies might not make it. “It is difficult for the small truckers,” Dave Menzel, president and COO of Echo, said. “We know of truck drivers and small carriers who have just said, ‘I’m going to stay home because I can’t find freight and the rates are too low.’”

Menzel said he also has seen carriers pull drivers off the road because of low demand. Knight-Swift’s Jackson says many of them are knocking on his doors. “We’ve seen an increase in experienced drivers looking for employment at numbers we’ve not seen before,” he said. “That’s a pretty powerful indicator for us of where the small carrier is right now.”

In a sudden market collapse, even size doesn’t bring a carrier immunity. “There are a lot of players who really did not make meaningful income improvements even during 2018, when we were in the best trucking year since deregulation,” Jackson said. “If you took all their debt and divided it by truck, the amount would be astonishing. And debt will get more expensive.”

Trucking companies say simply contacting customers is a challenge at the moment. “We’re trying to figure out which customers are open, [and] which of our customers’ customers are also open so that we’re not picking up freight that can’t be delivered,” Satterfield said. “But many of our customers, they’re not sure what to expect either as they begin to reopen.”

One thing they can be sure about — restarting the US economy won’t be as simple as throwing a switch. A gradual, patchy restart in “fits and starts” is expected as states, counties, and municipalities across the country debate when and how to reopen for business. Businesses may find suppliers in other states are still shut down, or furloughed workers are not available.

“It’s obvious supply chains are really discombobulated at this point,” said Ed Smith, director of distribution and PortSide services for Averitt Express, an LTL carrier based in Cookeville, Tennessee. They are likely to be more discombobulated after another month or more of shuttered businesses and layoffs, with dislocation of physical assets and human resources.

“It’s not just how much freight is there, it’s how much equipment is out there, how many drivers will be available,” John Haber, CEO of transportation consultant Spend Management Experts, said. “There’s a balancing act of freight and capacity going on that’s making things harder to predict what trucking companies are going to be in business [post-pandemic].”

Rehiring the newly unemployed will take time, and even once consumers are again gainfully employed, they may not be willing to dust off their wallets and start spending. “I think our large retailers and BCOs [beneficial cargo owners] are beginning to ask how robust their inbound supply chains need to be with unemployment where it is,” Smith said. “People are going to prioritize their purchases.”

There are fears consumer behavior may not return to pre-COVID-19 levels or patterns for years, as the threat of a second wave of infections and further economic damage hovers on the horizon. A vaccine that could end those concerns isn’t likely to be available until some time next year. All these issues complicate the likely path to US economic and supply chain recovery.

Trucking officials remain cautiously optimistic. “We’re getting to the point where we’re well into this pandemic, and now it seems like some of it’s coming under control and some markets are beginning to talk about reopening,” Sattersfield said. “You’d like to think that the worst is behind us and that we’ve hit a floor, but that's something that we look at each and every day.”

As states gradually lighten restrictions on public gatherings and businesses, Jackson is confident consumers will return to stores with cash in hand. “Retailers will be after those stimulus dollars,” he said “They’re going to want to draw people out with sales, even if they’ll be wearing masks and there will be plexiglass barriers at the checkout counters.”

Swift searches for US freight bump to accelerate rates