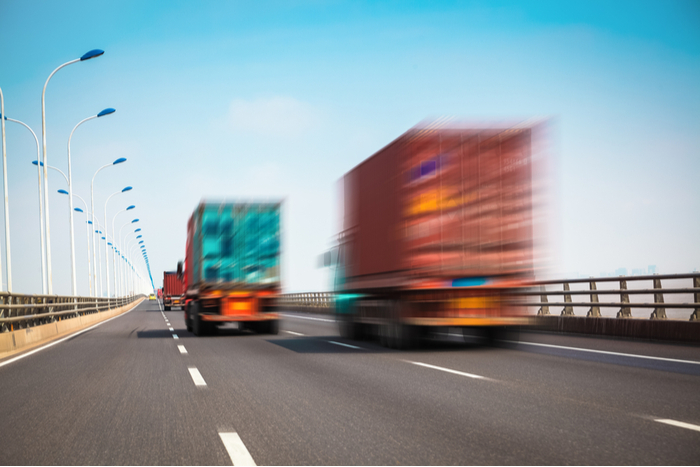 Surface transportation shippers now have a number of options to lock in future rates direct with carriers, either using forward contracts or guaranteed advance rates from brokers. Photo credit: Shutterstock.com.

Fueled by $20 million in venture funding, a logistics startup is aiming to triple the amount of truckload spend guaranteed between shippers and logistics providers with binding forward contract options in 2020.

New York-based Leaf Logistics (formerly known as Logistics Exchange) told JOC.com that a Series A round of funding, which the company closed in February, will allow it to expand its forward contract platform, allowing shippers to shift a certain percentage of their freight spend by committing to long-term binding rates with carriers. The company is aiming to manage $300 million in truckload transport spend by the end of the year, CEO Anshu Prasad told JOC.com in an interview.

That percentage of freight spend relevant to the Leaf model depends on the demands of the shipper. It could come from a shipper’s base capacity needs — e.g., shipments with a predictable pattern year-round — or capacity the shipper knows it will need at a certain point in the future. Shippers can commit to rates a week out, or a year or more in advance.

Prasad told JOC.com that by the end of 2019, Leaf was working with a “dozen or so household-name shippers,” representing more than $100 million of contracted freight. “That’s eight times more than we had thought we’d have at this point, confirming the importance of guaranteed service for sophisticated shippers. And they’re not starting out with small pilots; forward contracts are relevant for a meaningful percentage of their spend.”

He noted there has been 100 percent compliance in tender acceptance and rates associated with Leaf contracts, ensuring service reliability while eliminating an average of 15 to 20 “manual touches” per shipment. Shippers have seen freight savings of 15 percent and higher, and providers have seen margin increases of 20 percent or more, Prasad added.

“The fact that there are 20 percent-plus margin opportunities points out how inefficient the industry is,” he said.

From ‘risk averse’ to ‘controlled risk’

Leaf Logistics, founded in 2017, last raised a $3.7 million seed round in August 2018. In 2019, the company more than tripled its team to 25, and is doubling down on what Prasad dubbed “network coordination.” That means not only helping shippers reduce volatility and management costs associated with freight procurement, but also lowering spend through a reduction in empty miles through coordinating headhauls with backhauls across shippers.

One Leaf customer, multinational brewery and drink producer AB InBev, uses the platform to plan secured capacity nearly one year ahead, as opposed to traditional contracting, which doesn’t compel the shipper to actually tender freight or the carrier to pick it up.

“We’re out through February 2021 in terms of our base plan,” said Loren Foster, senior director of procurement at the company. “As we extend our view, we’ll probably go out to three to six months for surge capacity and shoulder capacity,” referring to situations where AB InBev wouldn’t need capacity it had originally thought it would, and would then return it to carriers to use for other shippers’ loads.

“We want this to be more of a shared benefit, so if there are situations where we went long on this lane and the volume is not there, we can free up the capacity as opposed to having the carrier wait for us for a load that’s never going to materialize,” he said.

Foster said Leaf is also helping AB InBev link its production data to its freight procurement, as opposed to looking at transportation as an independent leg of the supply chain. “Improvements in accuracy and lead time are going to be better than what we have today.”

AB InBev has worked with Leaf since the startup’s inception, part of a broad plan by the global beverage maker to test out new technology-based freight approaches to be more responsive to market conditions and to cut supply chain-related carbon emissions.

“In 2018, we shifted our procurement strategy to focus more on total cost of ownership, reducing environmental impact by avoiding empty miles and reducing exposure to risk,” Foster said. “We said ‘let's pilot proposals from several companies and take little bets.’”

That includes using Transfix, Uber, Convoy, and a couple other partners that didn’t make the cut, as well as exploring opportunities with traditional brokers.

“We pivoted from ‘risk averse’ to ‘controlled risk,’” Foster said. “Leaf has something different from a digital broker. It’s not your traditional one-year freight contract, with no commitments on either side.”

Foster said he “bought in right away,” as AB InBev, along with several other large shippers, faced “tremendous market pressure” in 2018, when a lack of trucking capacity in the United States caused spot rates to skyrocket. “The lower your contract base rates relative to ‘market’ the less likely those rates will be accepted on contract tenders for freight movements. We’ve adjusted our contracting strategy to bring that risk down.”

Adapting to a changing market

AB InBev has also actively reduced its contracted base for carriers based on historic and predictive performance, through both asset-based carriers and truckload brokerage.

“Even today, with the market being soft, my internal driver is to meet my allocation commitments, rather than being opportunistic,” Foster said. “That opportunity is there, but the risk grows when you take that route. How can we be more effective instead of chasing a nickel or dime?

Leaf’s “model has some finite guardrails, as opposed to saying, ‘Am I going to get this capacity two months from now?’ That translates into consistent demand for the carriers.”

The Leaf contracts don’t change the underlying foundations of the market for AB InBev; they just provide a way to adapt when things inevitably change.

“In a perfect state, we’d have 100 percent perfect demand and allocate toward that,” Foster said. “But because we have variable demand, you have to switch away from the plan, and then it gets more complicated to say what’s the right value. You try to operate within your budgetary constraints, but when you can’t, you at least want the visibility to say, ‘This will be the impact.’”

That scenario is particularly relevant in light of a number of freight rate forecasting tools that have come on the market in recent years. In addition, the freight marketplace Transfix said earlier this year that it has developed the ability to accurately predict rates up to one year out and will honor those rates and ensure loads are picked up even if the market turns.

Foster noted that existing brokers project rates out for the year for their customers through traditional — i.e., non-binding — contracts. But Prasad said the guaranteed nature of Leaf contracts allows shippers and providers more forward certainty, even if those rates go above what a shipper forecasted at the start of a budget cycle.

“The shipper is already making a bet over a year; it’s called a budget,” he said. “Some of our customers actually want to shorten that decision-making window, but also make it more data-driven.”