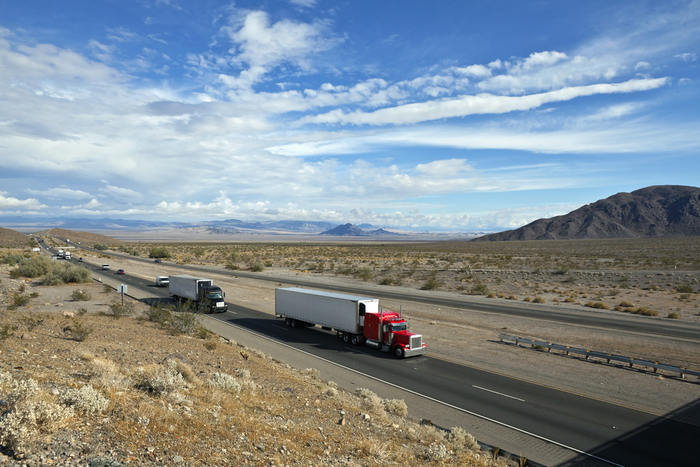 The impact of the Chinese coronavirus appears to have reached outbound spot rates from Los Angeles. Photo credit: Shutterstock.com.

The reduction in containerized freight shipped from China caused by the coronavirus disease 2019 (COVID-19) outbreak appears to be affecting spot rates in certain truck lanes in the United States. Spot truckload rates in lanes to and from Los Angeles are down from recent highs in December and January and year over year, suggesting the annualized pricing drop may represent more than typical seasonal sluggishness.

The Port of Los Angeles is forecasting a 25 percent year-over-year reduction in containerized imports for February and a 15 percent first-quarter shortfall, following a 5.5 percent drop in January.  Long Beach port authorities told JOC.com that they expect volumes to end the month down 6 percent from the same period last year, and for first quarter traffic to be down 12 percent.

Lethargy in truck volumes and rates could now quickly flip to a tighter, higher-priced market if a backlog of Asian imports hits the largest US container port in March or April following the restarting of production facilities in China. US importers and shippers need to plan for potentially higher rates, and for the probability that capacity — whether trucks, trailers, containers, or chassis — won’t necessarily be where they expect it to be.

Load board operator DAT Solutions on Tuesday said spot dry-van rates from Los Angeles to Chicago dropped 5 cents to $1.28 per mile last week from the previous week, while the JOC Shipper All-In Truckload Rate of $1.38 per mile this month is down 12 cents from January. Loadsmart, which provides quotes to JOC.com on top US freight lanes, reports a 9-cent decrease from Los Angeles to Chicago in February compared with January.

On the return leg, DAT’s average spot rates decreased 3 cents to $1.40 per loaded mile last week. JOC’s data shows Chicago to Los Angeles rates in February are down 3 cents to $1.58 compared with January.

DAT also found spot rates from Los Angeles to Atlanta slipped 6 cents week over week to $1.40 per mile, and the return trip from Atlanta to Los Angeles dropped 3 cents. Loadsmart and JOC’s data show declines in those markets, too.

Inbound rates to LA essentially were flat from January, according to Loadsmart, but down 5 cents from December 2019.

The February decline in outbound spot truck pricing is still within the range of normal seasonality, although the monthly sequential decline was slightly steeper than a year ago. But the sharper decline also may represent an early economic ripple from the impact of coronavirus-related factory closures in China. A dramatic drop in containerized imports naturally means lower expectations for shipments of all types headed inland.

February is typically a slow month for freight moving on US highways — and for US imports from Asia — following the Lunar New Year holiday, which fell on Jan. 25 this year. But the coronavirus kept many Chinese manufacturing facilities closed beyond the New Year holiday, leading to a massive shortfall in exports, a drop in container demand, and a spike in blanked sailings.

As of Feb. 23, the number of blank sailings announced by ocean shipping lines equated to an estimated total demand shortfall of 1.7 million TEU, according to Lars Jensen, CEO of Sea-Intelligence Maritime Consulting.

The drop in imports could lead to a surge later in the spring that would see outbound spot rates from Los Angeles increase, although much depends on the timing and extent of that surge. DAT points out that nationally, spot freight volume “is holding steady,” with load-to-truck ratios rising this week, and there is plenty of outbound spot volume from Los Angeles, regardless of import levels.

In a coronavirus update, Shanghai-based Worldwide Logistics Group told customers that manufacturing and drayage in China are gradually beginning to recover, with most enterprises resuming normal work Feb. 24. “There is a big possibility that we will see a cargo rush in the second half of March,” the non-vessel-operating common carrier (NVO) said in its email.

It’s likely interruptions in production will result in displaced capacity, whether on land or water, when the freight spigot from China reopens. Empty containers are stuck outside China, and the amount of shipping capacity withdrawn from the market will give carriers limited ability to respond to restocking demand.

That restocking may tighten over-the-road truck capacity in the US, depending on its intensity, especially if it hits when the produce and the spring retail season place increased demand on trucking resources. The lesser the intensity, the more likely the current level of excess truck capacity will absorb additional freight, rebalancing the truck market.

“The coronavirus has muddled the 2020 picture a bit, by creating the potential for a surge of volumes and port congestion,” Todd Tranausky, vice president of rail and intermodal at FTR Transportation Intelligence, said in a statement. “But any potential issues from a surge are likely to be short-lived because of the excess capacity available across freight modes.”