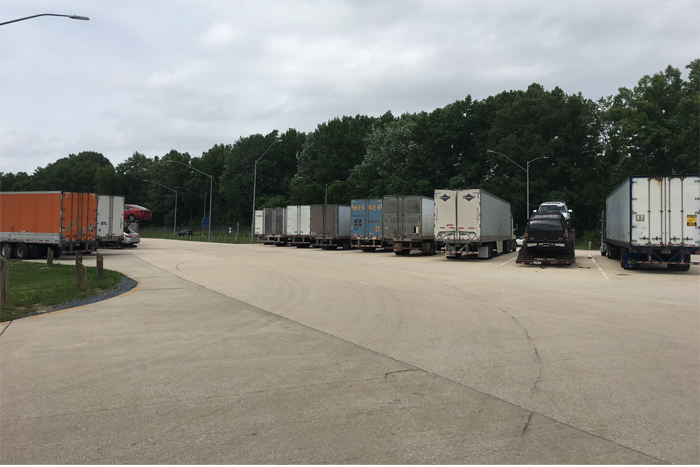 Small carriers are hurting this year due to falling spot market rates, but Coyote Logistics says the industry has hit bottom and business should improve to end 2019. Photo credit: Ari Ashe/JOC.com.

Truckload spot rates have been down more than 20 percent from a year ago for several months, but a new forecast Thursday warned shippers that a change in direction is imminent and that the favorable low rates won’t continue into 2020.

Spot rates won’t be positive year over year until 2020, but rates and demand will pick up in the last four months of this year, according to third-party logistics (3PL) provider Coyote Logistics, a subsidiary of UPS Inc. While contract rates will continue to struggle into early next year, shippers who don’t act quickly to lock in 2020 rates could experience sticker shock come next spring, the company said.

The Coyote Curve, a quarterly spot market index, was down 24.9 percent year over year in the second quarter. While Coyote shows contract rates higher now than a year ago, it believes prices will turn negative before the end of 2019. Contract rates would begin next year lower than 2019, down as much as 5 percent, then recover again in the middle of 2020, Coyote said.

The American Trucking Associations (ATA) reported that truck tonnage was up 7.3 percent year over year in July. One reason is because the index is weighted toward contract to reflect the full market.

Chris Pickett, Coyote’s chief strategy officer, recommends shippers approach their 2020 transportation budgets in a similar way as 2017. That was a transition year when spot and contract rates began to recover from an industrial recession that hurt trucking in 2016.

“We expect the second quarter was the [turning point]. If it’s anything like the last three [cycles], then we expect the implications of that to be a two-to-three-quarter journey back to equilibrium,” Pickett said. “We expect, based on our framework, an inflationary spot truckload market as early as the first quarter of 2020.”

Bid out contracts while you can

Because spot markets are a leading indicator, the short-term forecast remains tipped toward shippers into early 2020.

“I expect most people in procurement to achieve moderate to significant year-over-year cost savings this year. But I also expect that to be short-lived,” Pickett said on a conference call. “If we see spot market rates surging ... I think you see [shipper’s] routing guides fall apart by the second quarter and most shippers will find themselves with unplanned exposure out in the spot market.”

Shippers who lock in rates in January might be able to secure more favorable rates than those putting lanes out for bid in the spring and summer of 2020.

The Coyote Curve shows the spot market hit rock bottom last quarter and conditions will gradually improve through the end of this year.

Some of this recovery under way was foreseeable because rates climbed 18 cents per mile between February and June 2018 then dropped 24 cents between July and November. When doing a year-over-year comparison, the bar is much lower now. The months in which rates are 20 percent below 2018 levels will likely vanish.

Rates are also higher this month compared with July, according to a JOC.com preliminary analysis of lanes, thanks to stronger demand in the Midwest. In 2018, spot market rates dropped 13 cents sequentially between July and August.

Pickett said spot rates should cross over into positive territory in January. It was another prediction, however, that was eye opening. Pickett said spot rates will rise next year even if there is a recession in the US economy. Such a scenario, he said, would only mute how much rates would rise, but they would still climb regardless.