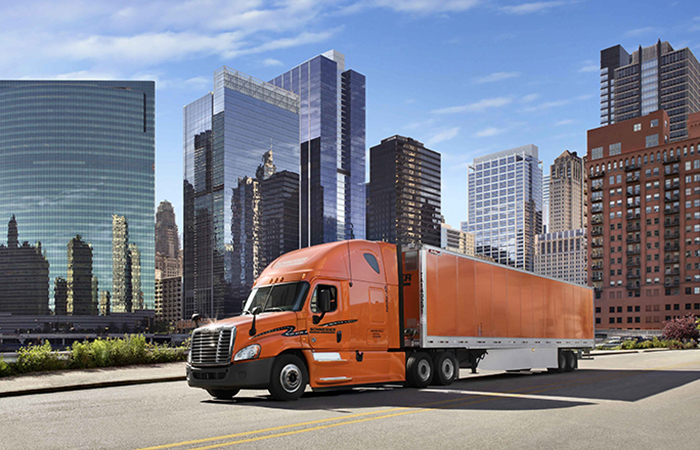 Schneider National's efforts to shore up its e-commerce operations provided growth in a lackluster first quarter.

Schneider National’s first quarterly earnings report as a public company underscored the importance of acquisitions as a route to growth in a soft trucking market.

The purchase of Watkins & Shepard and Lodeso last year gave the second-largest US truckload operator a boost in the last-mile logistics market and additional revenue during an otherwise weak first quarter. The 8.4 percent increase in total revenue to $1 billion in the quarter was primarily due to the June 2016 acquisitions, brokerage growth, and higher fuel surcharge revenue, Schneider said.

Intermodal revenue, excluding fuel surcharges, fell 2 percent to $181.2 million, despite a 6.2 percent increase in volume. Schneider blamed soft pricing and higher volumes on Eastern and Western US routes with shorter lengths of haul.

Growth in freight brokerage and import-export business drove logistics revenue up 10.3 percent to $189.3 million, as truckload brokerage volumes rose 13.2 percent from the 2016 first quarter. But the division’s income was flat at $5.2 million, another sign of soft truckload pricing.

Schneider’s acquisition last June of trucking company Watkins & Shepard and technology firm Lodeso gave it a stronger footing in last-mile logistics, especially the delivery of heavy goods, an area that is fast becoming the front line in e-commerce competition.

Some analysts suggest the biggest acquisition in trucking history, the combination of Swift Transportation and Knight Transportation, was partly a reaction to Schneider’s going public in April, a move that brought the company a total of approximately $340 million.

“The way carriers grow isn’t by getting more equipment and adding more drivers — because there aren’t any — but buying other companies,” John Larkin, a managing director at Stifel, said at the NASSTRAC Shipper Conference in Orlando last month.

Post-IPO, Schneider now has lower-cost debt, a cleaner balance sheet, and cash for acquisitions, Larkin said. In its prospectus, Schneider said it would use about $150 million is to retire debt and the rest for corporate purposes, including the purchase of chassis.

“I would be surprised if we didn’t see a couple of more deals here in the next few months,” Larkin told NASSTRAC. “With the cost of debt relatively low, this would be the time to do it.”

Schneider CEO Chris Lofgren doesn’t expect much improvement in the trucking market in the second quarter. “However, we expect improving market conditions in the second half of 2017, driven both by an improving freight market as well as concerns surrounding the impending ELD [electronic logging device] mandate,” he said in statement.

If the freight market falls short in the second half and the impact of the ELD mandate is muted, truckers may see even more reason to turn to acquisitions to better control capacity and grow.