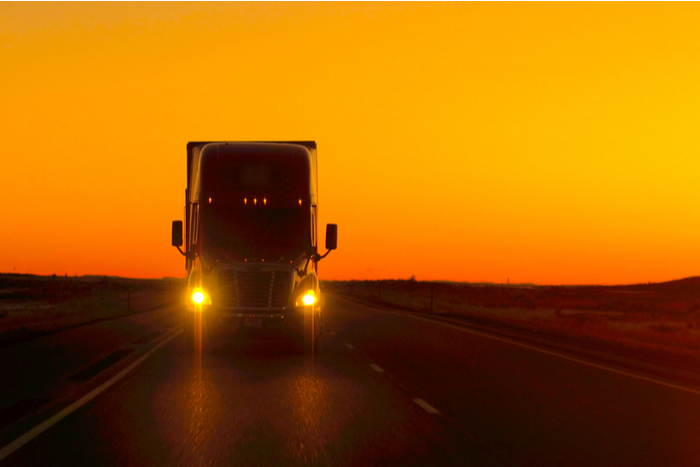 This summer will be a trial for tens of thousands of small trucking companies struggling to stay in business. First, they will likely see freight volumes level off and drop seasonally after Independence Day. Second, government assistance that has helped some companies pay drivers will run out, removing a safety net that has kept some small carriers rolling.

That has led to calls for more relief. “Small over-the-road carriers, which make up more than 90 percent of the US trucking industry, need the same level of federal backing that airlines and railroads have received as they keep US domestic supply lines intact during the COVID-19 pandemic,” Lily Shen, president and CEO of Transfix, said in a JOC.com commentary.

“We will have the capacity to see us through the rest of this peak,” Ken Adamo, chief of analytics at DAT Solutions, said, referring to the uptick in freight volumes that began in May after US businesses that shut down in March and April began reopening. Produce season, and normal seasonality, typically make June one of the strongest months for trucking.

“The question is what happens to these small and mid-sized carriers once the PPP goes away?” Adamo asked, referring to the Payroll Protection Program (PPP) loans available to small businesses under the Coronavirus Aid, Relief, and Economic Security, or CARES, Act. “What’s going to happen when the dust settles and carriers are exposed to the new normal?”

Small trucking companies have until June 30 to apply for PPP loans from the US government. As of June 12, $129.8 billion in PPP funding — much of which will be forgivable, if applied to payroll — remained to be claimed. Approximately $512.3 billion in PPP loans had been awarded by June 12, the latest date for which data are available.

Adamo’s “new normal” may include less freight. US shipment volumes were down 22.7 percent and 23.6 percent year over year in April and May, respectively, although they rose 1.6 percent in May from April, according to the Cass Freight Shipments Index. Until April, that index, which uses January 1990 as its base month, hadn’t dropped below 1.000 since April 2010.

Over the past 10 years, the Cass Freight Shipments Index historically has risen in the spring and then dropped in July, after Independence Day, before rising again in August or September. That was true even in strong years such as 2018, when the index peaked in May before dropping sequentially in June, July, and August. There may be a similar freight gap in 2020.

That will make July and August difficult months for small trucking companies, unless they are hauling goods already deemed essential. “Fewer people taking vacations and holding more cookouts and neighborhood barbeques at home could drive more demand on the consumer packaged goods side,” Adamo said, helping some carriers bridge the freight gap.

“The level of uncertainty around trucking in the coming months and years is astronomically high,” said Jeff Tucker, CEO of third-party logistics company Tucker Company Worldwide. Much of that uncertainty turns on how quickly unemployed workers are rehired, he said. High unemployment “spells a lot less freight moving and hard times ahead in transportation.”

Tucker remains optimistic that freight volumes will increase sequentially this year, as more companies push to reopen or restart stalled business. “We’ve seen improvements in business over the last two weeks,” he said. Freight volumes may still be down by double-digits year over year, but a sequential uptick month by month would keep more truckers on the road.

Those relying solely on the spot market to find loads, or hauling freight that is in less demand during the recession, are likely to struggle, with more trucks available to haul less freight. Those are the small trucking companies that would benefit most from a PPP loan, which can be used for payroll and other purposes over a 24-week period — approximately six months.

How many trucking loans?

Another relevant question is how many small trucking firms have actually taken advantage of the PPP loan program? The answer may be not as many as you would think. The amount of PPP loans small trucking firms are receiving may be overestimated by those who believe PPP funds are the one thing standing between US shippers and a capacity crunch this fall.

The US Small Business Administration, which oversees the PPP, tracks loans by North American Industry Classification System (NAICS) codes, a classification system created by the US, Canada, and Mexico and introduced in 1997. NAICS groups several transportation-related sub-sectors under the rubric of “transportation and warehousing,” or NAICS 48-49.

It’s not clear why more small trucking firms have not applied for or received PPP loans. Some companies may not have been eligible because of the way they pay drivers — companies using 1099 contractors rather than W-2 employees aren’t eligible for PPP payroll funds. However, since April 10, those 1099 workers can apply for their own PPP loan as a business.

Loan applications and then applications for forgiveness of the loan were complex, as well. The SBA introduced simplified loan forgiveness application forms June 16, requiring less documentation. The Payroll Protection Program Flexibility Act, which took effect June 5, also expanded the length of maturity for the loans and provided more favorable terms.

It’s also possible that tens of thousands of small trucking firms received a share of the 161,794 PPP loans disbursed to transportation and warehousing businesses and kept running through April and early May, when freight volumes and spot rates tanked. The number of active, for-hire trucking companies, licensed and insured, has actually increased this year, Tucker said.

Tucker was surprised by April and May trucking data from the Federal Motor Carrier Safety Administration (FMCSA) that his company analyzes and validates monthly. “I was expecting to see a significant fall-off in active, for-hire carrier numbers and that didn’t happen,” he said. “We lost a couple of bigger carriers, but we gained smaller carriers month to month.”

The number of those carriers with one to six trucks increased by 493 from April to May, a trend that may reflect laid off employees at larger carriers striking out on their own. The total number of active, for-hire carriers, defined by Tucker as ones that a broker could legally hire, climbed by 1,300 companies to 249,577, with 207,144 carriers operating one to six trucks.

“There’s a chance my data is lagging a bit in terms of tractor and driver count, but I’m pleasantly surprised the number of carriers hasn’t seen an appreciable drop,” he said. Tucker’s analysis corresponds with research by Donald Broughton, principal and manager of Broughton Capital, that shows an expected flood of trucking bankruptcies has not happened in this recession.

“The reduction of trucking capacity from failures has not yet been as significant as the collapse in demand,” Broughton told JOC Uncharted June 3. “Trucking companies just don’t go out of business because they’re losing money. Trucking companies go out of business because they run out of cash,” he said. Low fuel prices and PPP may be helping truckers stay in the game.

“PPP funding will certainly go a long way toward helping owner-operators weather the storm we’re in,” Tucker said. “That money enables you to ride out those days when no loads are available, or perhaps you need to take a slight loss on a load, or get skinnier on a rate than you’d like, etc. It’s a direct help. It’s a needed help. And it’s still available [until June 30].”

Tucker, similar to Broughton, believes some capacity has exited the industry, even if the number of companies has remained stable or increased slightly. “Freight rates [are] coming back into a level of normalcy, but we still have companies that are not shipping,” Tucker noted. “I have to presume there’s a lot of capacity that’s been taken out of the market but hasn’t gone out of business.”

In other words, a company with six trucks furloughs three drivers, but doesn’t change the information filed with FMCSA under its licensing and insurance database. “Perhaps a couple of trucks are parked and drivers are receiving unemployment or PPP money,” he said. “A lot of capacity must be out of the marketplace temporarily right now, waiting to see rates rise and normalize.”

That type of capacity loss is largely invisible, until freight demand rises, and capacity is needed.

Canada Trade and Shipping Outlook
TPM22: What We Learned — Container Shipping in the Crosshairs
Managing E-Commerce From Order to Delivery and Beyond
END_OF_DOCUMENT_TOKEN_TO_BE_REPLACED