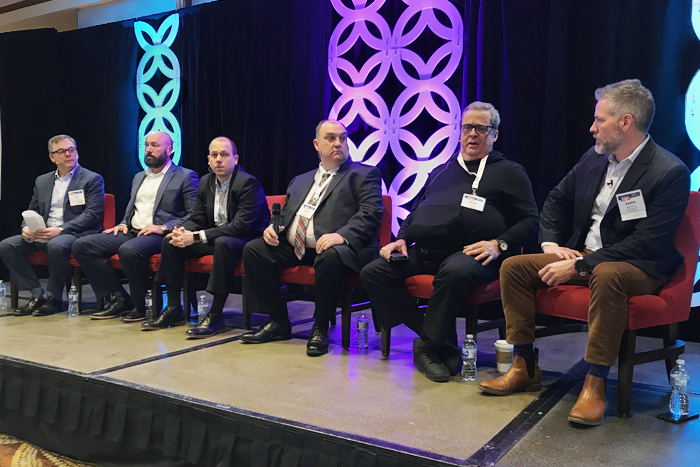 The trucking panel at the NITL conference discussed how to remain a shipper of choice regardless of whether rates are increasing or decreasing and why some shippers revert to bad habits. Photo credit: Ari Ashe/JOC.com.

SAN ANTONIO, Texas — The freight market ended 2019 on a high note for carriers as spot truckload rates surged in December, and while capacity versus demand seems to be nearly in balance, it’s a bit murky as to which way and how far the pendulum will move this year.

Industry data clearly shows the low point of spot rates has passed, but an inflationary environment doesn’t necessarily mean a return to the lopsided pro-carrier market of 2018.

“It’s kind of a wait-and-see approach right now,” said Travis Krous, director of transportation for Nestlé Purina North America, speaking at the National Industrial Transportation League (NITL) conference Jan. 21. “Everybody thinks something is coming, but no one is sure which way it’s going to go. But the pricing pressure isn’t there right now like we have seen in the past.”

Spot rates have retreated in January, normal in the seasonal freight markets, but there are plenty of data points to show an upward trajectory, according to truckload rates captured for the JOC Intermodal Savings Index. Retail spot rates — what a broker invoices a shipper — were down more than 20 percent midway through 2019; rates today are less than 5 percent lower than a year ago. Although January 2020 spot truck rates are on track to be slightly lower than 2019, according to JOC data, the year-over-year change is closer to flat than three months ago.

The JOC Spot Truckload Shipper Rate, based on 115 modally competitive lanes, ended December at $1.88 per mile, the highest level in 2019.

Shipper rates were up sequentially in December on 99 out of 100 lanes, according to quotes provided by digital broker Loadsmart and analyzed by JOC.com. The average lane increased approximately 15 cents per mile.

Even truckload contract rates, which were down 10 percent year over year last autumn, ended December down 6.5 percent, according to DAT Solutions. Forecasts from researchers with FTR Intelligence and Bloomberg Intelligence call for contract rates to range between down 1 percent to up 1 percent in 2020, although carriers have privately said they hope to secure mid-single-digit increases later in the year if the spot market continues to heat up and available capacity tightens.

Regulatory changes such as the Drug and Alcohol Clearinghouse, hair follicle testing, and the mandatory shift last month from automatic on-board recording devices (AOBRDs) to electronic logging devices (ELDs) can be a catalyst, although it’s too soon to measure how any of these issues are impacting capacity. The clearinghouse will make it easier for carriers to uncover drivers’ past failed drug tests, while hair follicle testing will be able to detect illicit drug use further into the past than a urine test. Both the clearinghouse and follicle testing could trim the pool of qualified drivers for medium and large truckload fleets.

The AOBRD-to-ELD conversion may lower driver productivity for fleets because the old devices wouldn’t put a driver on duty if the truck was traveling less than 15 miles per hour, but an ELD triggers at only 5 miles per hour.

“Many drivers have said it’s frustrating because they will do everything to comply to drive legally and safely, but when they get to the shipper, many are not ready to load or unload. It slows down a driver’s day because they cannot get out in a timely fashion,” Mark Willis, a host on SiriusXM’s Road Dog Trucking channel, told the conference.

Being a ‘shipper of choice’

In 2018, shippers wanted to know how to become a shipper of choice. Capacity was tight and those shippers unable to secure capacity in a timely fashion were left wondering how they could rectify the situation. When conditions flipped in 2019, shippers paying lip service to “shipper of choice” reverted back to old habits, according to trucking executives.

The shipper of choice not only provides driver-friendly facilities to avoid what Willis described, but also treats motor carriers as partners rather than interchangeable parts of the supply chain. Shippers only dabbling into being a shipper of choice abandoned their contract carriers last year by pulling freight to take advantage of very low spot rates.

If conditions flip again later in 2020, then transactional shippers will again feel the painful side of those decisions.

Nestlé Purina, on the other hand, views itself as a strategic shipper that bypassed opportunities to save a few bucks last year by sticking with its contract partners. Krous said his C-suite cares about transportation, asks for frequent updates on the market, and understands the ebbs and flow of business conditions.

“Being transactional by chasing the spot market [in 2019] may have gotten you some short-term wins, but longer term you will end up paying for it,” he said.

Why do shippers slip into bad habits when markets cool?

Jeff Tucker, CEO of Tucker Company Worldwide, a freight broker, said it’s natural for a company to care about being a shipper of choice in pro-trucking markets, then slip in a pro-shipping market. Companies prioritize the biggest problems, he said, but quickly move on when another topic becomes more important. Good behaviors can be easily forgotten when yesterday’s problems in shipping are not an issue today.

“You are only interested in risk management when something bad happens and immediate corrective action is necessary. If trucks are plentiful, capacity is easier to find like last year, then you take your mind off [the shipper of choice] initiative and work on the next thing,” Tucker said. “Shippers have 125 things to be thinking about in their day-to-day job and maybe that slips to the bottom of the list.”