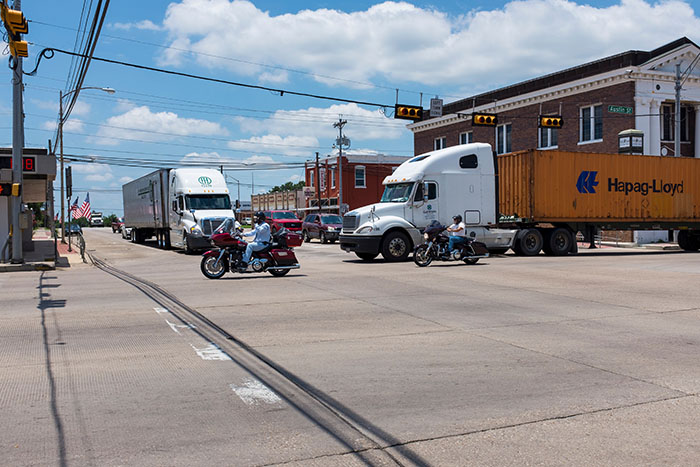 US truck capacity is tight from the largest markets to the smallest. Photo credit: Shutterstock.com.

Multiple top national truckload companies are levying surcharges or rejecting freight because of the overwhelming demand in the typical slow season, frustrating shippers looking for additional capacity. This also has trucking officials warning of an even sharper crunch when produce season picks up in April and retailers stock up for the summer and early autumn.

Trucking companies are busy in the third and fourth quarters when retailers stock the shelves for the holidays and in the spring when growers sell fruits and vegetables and stores begin to stock up on barbecues, lawn care products, outdoor items, and eventually back-to-school items. Demand in between those periods typically tapers off, but that is not the case this year.

Motor carriers, as a result, are struggling to find the trucks to satisfy all their shippers asking for more service, they say.

Hub Group acknowledged late last month that it is upcharging some shippers in Atlanta, Chicago, Dallas, Los Angeles, and Seattle this winter, which one shipper said ranges between $150 and $600, although the carrier said there is not any minimum or maximum rate. Schneider National and Covenant Transport are also assessing fees on excess business to cover their additional costs to reposition equipment from nearby cities or states. Regularly tendered freight is not subject to these upcharges, only freight not covered in the shipper-carrier contract.

For the past two years, business conditions favored shippers as contract rates remained low and drivers bid against each other to move the sparse freight available on the spot market. In the second half of last year, freight demand began steadily improving while trucks were not as easy to find.

Hurricane Harvey and Hurricane Irma in August and September 2017 drove a new pipeline of disaster relief shipments and long-term reconstruction supplies. The new business opportunities flushed excess capacity from other US markets months ahead of the electronic logging device (ELD) mandate on Dec. 18, 2017.

With the new federal regulations requiring strict adherence to hours of service due to ELD monitoring, drivers are unable to be as productive each day than on paper logs. Rates have climbed as shippers vie to book highly sought after appointment windows in these tight schedules. Drivers upset with the new federal intervention into their lives may leave the industry after hard enforcement begins on April 1, only further exacerbating the supply shortage.

“A year ago, the freight wasn’t there. Today, we may be pulling a truck away from someone who has freight nearby,” Jason Rice, director of customer service with Covenant Transport, told JOC.com. Covenant offers longhaul dry-van and temperature-controlled trucking through its brand and subsidiaries Southern Refrigerated Transport and Star Transportation.

Repositioning fees or similar surcharges are unusual between January and the beginning of produce season in early April unless there is a weather emergency. This year, however, freight demand is significantly outpacing the supply of trucks, according to industry officials.

“I’ve been in the trucking industry since 1980 and I’ve never seen the balance being this out of whack,” said Dave Rusch, CEO of truckload carrier CRST International. “In our flatbed sector, there is a huge imbalance. For every truck, I have three loads that I have to turn down.”

Economic indicators show retailers and manufacturers are thriving from strong demand for products. The Conference Board’s consumer confidence index rose to 130.8 in February, the highest since November 2000. The Institute for Supply Chain Management’s PMI registered at 60.8 percent in February 2018, up from 57.6 in the same month last year.

But trucking companies say it is difficult to find enough drivers to move products because of the 17-year low unemployment of 4.1 percent and a drop in daily productivity due to ELDs.

One shipper, who spoke on the condition of anonymity, told JOC.com that Schneider wanted $1,000 on an intermodal load last month. The motor carrier did not refute the account but also declined to comment on its current rates.

Other motor carriers, though, are also applying accessorial charges and detention penalties in reaction to intermodal congestion in Chicago and Memphis, Tennessee.

Covenant Transport acknowledged upcharging shippers but only when necessary. For example, when the carrier repositions a truck from Indianapolis to Chicago for a shipper seeking extra capacity, pulling a driver from a customer in Indiana.

“In order to cover customers, you have to book and plan in advance to shift a truck into certain markets. Based on the day of the week, the deadhead or repositioning costs could be higher, more towards Tuesday, Wednesday, and Thursday. We are seeing in our trends so far this year that each day has been strong, and we are not seeing the market let up,” Rice told JOC.com.

CRST is not levying surcharges but is focusing on yield management by prioritizing top customers and profitable accounts. Shippers that cannot offer lucrative freight will find it harder to find a truck right away, Rusch said.

“Our capacity is going to go to our best customers, so what we do is turn down other freight. And we are turning down freight every single day,” Rusch said. “When someone asks us for additional trucks we examine whether the customer warrants the extra capacity. If so, we will pull that capacity from lower customers. All of our shippers are important but there are some in which the yield is not there.”

J.B. Hunt Transportation has also turned down freight in high-demand markets since early February in reaction to the capacity constraints in Los Angeles, Chicago, and Seattle, according to emails seen by JOC.com. Freight brokers also indicate capacity is tight on regional drayage in Pennsylvania.

To win the precious few trucks, shippers are renewing focus on becoming a “shipper of choice” by distinguishing themselves from other shippers. One popular way is to reduce detention at their distribution centers, which frustrate drivers and fleets alike.

Michelle Livingstone, vice president of transportation at Home Depot, used the phrase “shipper of choice” during a discussion at the 18th Annual TPM Conference in Long Beach, California, on March 6.

“What’s most important are the ongoing conversations between the carriers and ourselves so if any issues come up, we discuss them before they become a contract issue,” she said.

These discussions will become even more vital as the produce season kicks into gear, which absorbs significant trucking capacity, at the same time retailers prepare for the summer and back-to-school sales. Capacity could reach critical levels, with truck utilization eclipsing 105 percent, according to researchers and economists.

“It’s going to be insane and if anyone of my peers tell you any differently, they’re kidding themselves,” Rusch said.

i have parked my truck and

Permalink Submitted by bushpilot1954@y... on Mar 13, 2018 9:49AM EDT
i have parked my truck and retired after 25 yrs-ya'll have a nice day
Trucking Logistics›Truckload Freight
International Logistics›Logistics Providers