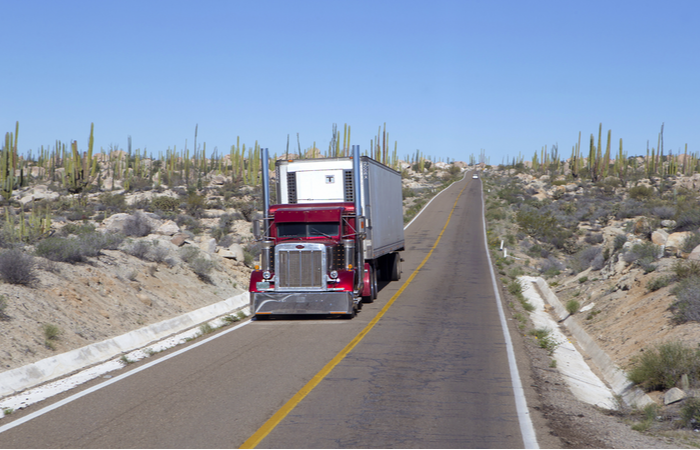 Trucking rate information from nine shippers underpins the launch of a benchmarking system that will enable shippers to compare the rates truckers are offering with a market average. Photo credit: Shutterstock.com.

Mexican shippers trying to cut trucking costs amid the country’s tight capacity and elevated rates will soon be able to compare rate quotes with benchmarks put together by Chainalytics and a Mexican partner.

The venture’s first truck-route pricing benchmarks will be available next month and offer the potential to strengthen a shipper’s negotiating position and help cut routing costs, said Atlanta-based Chainalytics, a supply chain consultant. The company is working with Mexico City-based TSOL, a consulting firm and reseller of third-party software solutions, which says the truck benchmarking system is the first of its kind in Mexico.

The benchmarks will initially be based on data provided by a consortium of nine shippers that are crunched and analyzed to provide a detailed report of the rates offered on different routes. Working through a web-based dashboard, participants can also get an estimate of market rates for particular routes based on factors including the distance, geographic location, and type of equipment used.

Chainalytics has for more than a decade created benchmarks in the US based on data provided by shippers and third-party logistics providers. The company also provides similar benchmarks in Europe. But there is “nothing like it” available in the Mexican market, said Erik Markeset, CEO of TSOL.

“Rate benchmarking today is completely anecdotal,” in Mexico, he said. “Companies call their buddies and similar companies, or hire consultants to make a bunch of phone calls” to provide insight on trucking rates, he said. “This is the first time that there is a scientific approach using data science and modeling.”

Aside from providing intelligence for tough rate negotiations, the benchmarks also could help shippers by providing data for such tasks as analyzing where is the most cost effective location to put a distribution center, Markeset said.

The benchmarks offer a potential tool as shippers face Mexican trucking capacity that has been tightened by a series of measures over the last year, which some users say has had a cumulative effect of hiking rates by 10 percent. The factors behind the rise include an ongoing driver shortage, and a government requirement that all double-tractor trailers be registered, which some truckers said was burdensome and expensive, and temporarily took some trucks off the road.

A more permanent capacity tightening resulted from hours-of-service regulations enacted last August. The rules limited trucker work-days to no more than 14 hours, with a mandated 30-minute rest break every five hours and a mandatory eight-hour break when driving hours expire.

Shippers who want to participate in the consortium contribute their rate information, at present about twice a year, and pay what Markeset calls a “reasonable membership fee.” The current consortium provides a “statistically significant model,” he said.

And while areas of Mexico with less trucking coverage initially will have less data than others, the strongest data will come from the central triangle between Monterrey, Guadalajara, and Mexico City, the country’s three most populous cities, said Inam Iyoob, a principal at Chainalytics.

For the moment, only full truckload services and intra-Mexico routes are covered, although cross-border benchmarking is likely in the future and possibly less-than-truckload services, Markeset said.