US trucking rolls into epoch-making lane

US trucking rolls into epoch-making lane 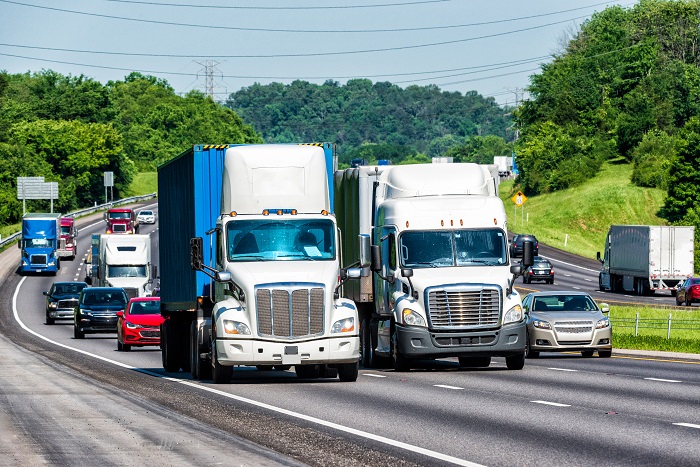 It’s a stronger US truck market than even 2004/2005, drivers are aware that they are in short supply, and there is no end in sight — hence there is an obvious reason why both shippers and trucking companies should keep those market conditions in mind. (Above: Trucks travel on a US highway.) Photo credit: Shutterstock.com.


“Euphoric” may be the best word to describe the atmosphere at a recent gathering of US trucking CEOs in Pittsburgh. The executives, who combined had a millennia of experience in the less-than-truckload (LTL) business, are enjoying a year unlike any of them could remember.

“This market is unprecedented,” said Rob Estes, president and CEO of Estes Express Lines, the largest privately owned US LTL carrier. The grandson of founder W.W. Estes and president of the LTL carrier since 1990, Estes said this year “is bigger even than 2004 and 2005.”

US truck market ‘busting at the seams’

The freight surge, capacity crunch, and rate hikes of 2004 and 2005 were very, very big. For the first time in decades, if ever, US shippers experienced a market “busting at the seams” with freight, without enough available truck capacity.

Real US GDP shot up as high as 6.9 percent in the third quarter of 2003, and then bounced up and down in the 2.1 to 4.9 percent range through 2006. Truckload rates rose in the high single digits, carriers dropped less profitable customers, and drivers were scarce.

New hours of service regulations for truck drivers that took effect in 2004 also tightened truck capacity, much as the electronic logging device (ELD) mandate aimed at enforcing those rules has done in 2018.

The trucking market really didn’t reset until the worst economic downturn since the Great Depression forced even more capacity out of the market through bankruptcies and truck sales. It took most trucking companies the better part of a decade to recover, and many didn’t.

Now shippers, logistics companies, and truckers find themselves in the midst of what seems an even bigger capacity and pricing crunch than they suffered 15 years ago, one defined by a resurgent US economy, the ELD mandate, and low unemployment.

The flow of goods into the United States from Asia, in particular, hasn’t been dampened yet by the threat of tariffs. In the first five months of 2018, the Port of Long Beach handled 3.2 million TEU, a 15 percent increase. The Port of Savannah’s TEU traffic was up 8.3 percent in the same period.

With imports up, freight is flowing inland

That means more freight is poised to flow inland from ports and warehouses on either US coast. And if truck drivers — particularly qualified drivers with several years of experience and clean accident records — were in short supply in 2005, they’re even harder to find today.

“There’s a truck availability problem. There are not enough people to sit in the trucks to meet demand,” said Lee Klaskow, senior analyst for transportation and logistics at Bloomberg Intelligence. “Truckload carriers stand to benefit from a prolonged truckload cycle.”

Not just truckload carriers. Intermodal rail and LTL stand to benefit too, as shippers begin to shift freight to wherever they can find the capacity needed to move goods. US truck pricing, whether truckload, LTL, or drayage, remains elevated at mid-year and that isn’t likely to change.

This isn’t just a US problem. Truck capacity is just as tight across the US border, in Canada and Mexico. In Europe, truck rates also are rising by double digits, according to Capgemini Consulting, thanks to higher regulatory costs, rising tolls, and, yes, a driver shortage.

What are shippers doing about this? There may be nothing they can do to change the prevailing trendline, but they are doing what they can to first, delivering goods to their customers as promised, and second, restraining rising transportation costs wherever that’s possible.

Much attention is focused on being or becoming a “shipper of choice,” essentially a business that’s carrier- and especially driver-friendly. That’s a good first step, although shippers that haven’t at least tried to be courteous to truck drivers before now may find it hard to catch up.

Forward-looking shippers are reviewing their supply chains, hoping to uncover ways to make existing processes and carrier relations more efficient, or to change those processes. Some shippers are warning higher freight costs will drive up the cost of consumer goods.

And shippers are spending more on dedicated contract carriage and third-party logistics services. Logistics spending is expected to grow 5.5 percent through 2019, according to the latest State of Logistics Report from the Council of Supply Chain Management Professionals.

The ELD mandate revealed hidden weaknesses in supply chains shippers are now racing to correct. Many of those supply chains were built on the assumption that US truckers could drive 500 miles within a day, legally. In the ELD era, the daily limit has firmed up around 450 miles.

That means same-day shipments suddenly became next-day shipments for many shippers, and transit times overall got longer, disrupting delivery and supply schedules. The disruption stretched across the US border, affecting supply chains linking the United States, Mexico, and Canada.

Based on data from 40 shippers, Zipline Logistics found transit times on lanes of 700 to 1,000 miles increased 10 percent after the ELD deadline and 16 percent on lanes of 450 to 550 miles. Those additional hours were enough to throw supply chains out of kilter, affecting service.

“A lot of the tweener lanes [450 to 750 miles] probably had a bigger impact than anybody expected in terms of truckload pricing,” C.H. Robinson Worldwide CEO John Wiehoff said at the SMC3 Connections Conference in White Sulphur Springs, West Virginia, June 25.

If shippers get to catch a breath this summer, it won’t be a long or deep one.

“Rates are going up and they will continue to go up,” said Charles “Chuck” W. Clowdis, Jr., founder and managing director of Trans-Logistics Group. His index of contract and spot prices showed contract truckload rates up 11 percent year over year in May, excluding fuel surcharges.

Spot market rates for dry van truckloads hit all-time highs on DAT Solutions load boards in late June, rising under pressure as the second quarter and the Fourth of July holiday drew closer. In fact, July began with truckload spot rates back at the highs previously seen in January.

Even a seasonal dip in spot rates from their current levels won’t have much of an impact on shippers as truck freight builds toward the autumn peak season. Pressure on contract rates remains high, although year-over-year increases are expected to slow in the second half of 2018.

How long will those rates continue to go up? The tailwinds behind truck pricing may blow into 2020, Klaskow said. The percentages by which rates rise are likely to decline, though, as monthly and quarterly year-over-year comparisons become tougher and tougher.

Carriers are also “playing catch up” from the period of weak pricing that lasted from 2015 through early 2017, Klaskow said. “We’re expecting that growth [in pricing] will continue barring any economic shocks to the economy. There are risks, especially given trade tensions.”

But it would take a major economic event — a collapse of consumer confidence and recession brought on by a rapid escalation of interest rates, perhaps, or a full-blown trade war — to bend the current trendline. That, of course, would be worse for shippers than higher rates.

Tight capacity across surface transportation modes, which also extends into warehousing, distinguishes this economic cycle, Klaskow said. “The supply demand imbalance has more legs than in past cycles. Most cycles last two to three years and we’re in year one of this cycle.”

That suggests shippers shouldn’t wait for the pricing pendulum to swing their way. Even if the economy were to slow, the truck driver problem would still need to be addressed. A substantial amount of the added cost shippers are paying this year is going to those drivers.

Remember the expression about having to “pay the piper” in the morning? Well, the alarm is ringing. And after years of working long hours for low wages, truck drivers expect to be paid, and they’re waking up to the fact that they — not just carriers — have market power.

12 steps to become a US truck 'shipper of choice'