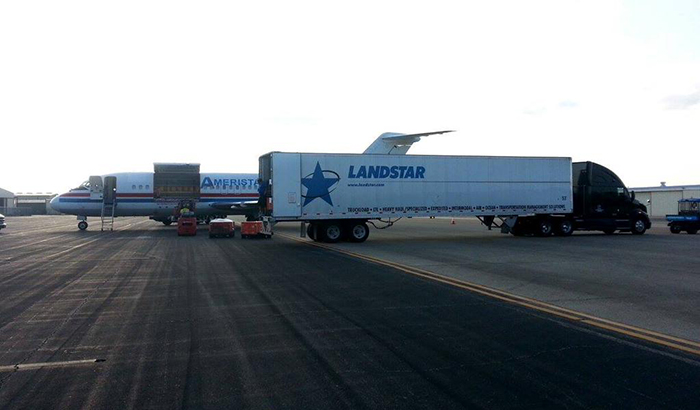 Landstar System defied a drop in fuel surcharge revenue and a softer flatbed market by increasing total revenue and profit and raising truck capacity to record levels in the third quarter. With a weak freight outlook, however, Landstar may throttle back capacity expansion in 2016.

Steady dry-van demand, increased truck revenue and a double-digit increase in intermodal rail, air and ocean freight revenue helped Landstar overcome tough comparisons with the booming 2014 third quarter, as it hauled more loads than a year ago but took in less revenue per load.

Landstar increased total revenue 2.7 percent from a year ago to $841.7 million. Looking ahead, the third-largest U.S. truckload carrier expects more of the same slower growth, with the number of loads hauled in the fourth quarter increasing in a “mid-single digit” percentage range and revenue per load decreasing.

“I don't see any significant catalyst changing the environment over the next 12 months to 18 months,” Landstar President and CEO Jim Gattoni said when discussing U.S. industrial production and the economy with Wall Street analysts in an Oct. 22 earnings conference call.

“I expect the pricing environment experienced in the 2015 third quarter to continue through the fourth quarter, which includes the impact of lower diesel fuel costs, a lower contribution of revenue attributed to heavy specialized services, and a stable supply and demand environment.”

Landstar’s third-quarter earnings report provides more evidence that trucking rate increases in mid-2015 were often negated by lower fuel surcharges, which masked what would otherwise have been more substantial growth in revenue generated by actual trucks in operation.

Although the number of truckloads Landstar and its brokered carriers hauled in the last quarter increased 8 percent year-over-year, “Revenue per load on loads hauled via truck was 6 percent lower than in the 2014 third quarter,” Gattoni said in the call, transcribed by Seeking Alpha.

The increase in load volume is also lower than in the second quarter, which saw truckloads rise 9.3 percent year-over-year, or the 11 percent gain in the third and fourth quarter of 2014. That’s a sign that while demand remains strong on a year-over-year basis, its growth has slowed.

Landstar last year leaped from fifth to third place on the SJ Consulting/JOC.com list of the 25 largest U.S. truckload carriers, increasing revenue 11.7 percent to $1.79 billion in 2014.

Gattoni blamed the third-quarter drop in revenue per load on lower fuel prices (which led to lower fuel surcharges), a shorter length of haul and “somewhat” softer demand, particularly for flatbeds. Demand for dry-van tractor-trailers is much stronger, Gattoni and other executives said.

Revenue per load hauled by brokered capacity — 50 percent of Landstar truck revenue — dropped 10 percent year-over-year, while only dropping 2 percent for Landstar owner-operators. On the flip side, lower fuel prices pulled down purchased transportation costs by 11 percent.

“We came into 2015 expecting slightly higher revenue per load as compared to 2014,” Gattoni said during the conference call. “Those expectations did not consider the significant drop in diesel fuel prices.” As of Oct. 19, the U.S. average diesel price, which can be found on JOC.com's Market Data Hub, is down 31 percent from a year ago.

In general, lower fuel prices have slashed fuel surcharges, reducing overall revenue for motor carriers such as J.B. Hunt Transport Services, Werner Enterprises and Marten Transport. That meant savings for shippers in the third quarter, even for those paying higher contract rates.

Shipper expenditures dropped 4.5 percent in July and 2 percent in August on a sequential monthly basis before rising 2.4 percent in September, according to the Cass Freight Index. For the quarter, shipper spending was down on average 1.4 percent from the 2014 quarter.

When it came to profit, however, Landstar made more money with less. The carrier’s operating profit increased 7.4 percent year-over-year to $64 million, while net profit rose 7.1 percent to a record $39.3 million, according to data the Jacksonville, Florida company released Oct. 22.

Although truckload capacity is “stable” for the moment, Landstar’s customers aren’t confident that calm will last long. “I think the customer base remains concerned about capacity,” Patrick J. O’Malley, vice president and chief commercial and marketing officer, said. “They've enjoyed this period of where it's balanced. But they're concerned that it could turn at any given moment.”

At the moment, Landstar has its truck count, measured in owner-operators or “business capacity owners,” close to where it needs it to be. “I think we’ll continue to grow the BCO count, but it’s really predicated upon demand out there for their services,” Joseph J. Beacom, vice president and chief operating and safety officer, said. “I think you’ll see incremental BCO growth in 2016.”