Landstar brings capacity up to 2008 levels as volumes rise

Landstar brings capacity up to 2008 levels as volumes rise 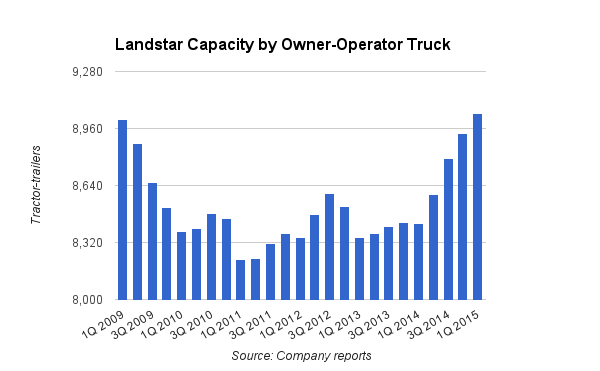 Landstar System revenue rose 8 percent in the first eight weeks of the second quarter, as the company revved capacity up to 2008 levels to handle strong freight demand and capitalize on higher rates.

Landstar hauled more truckloads in the first part of the second quarter than in any comparable period in the trucking company’s history, President and CEO Jim Gattoni said this week said in a conference call Thursday

However, truck utilization by Landstar “business capacity owners” or “BCOs” — the company’s term for owner-operators, was lower than a year ago. That means although the carrier hauled more freight overall, owner-operators hauled fewer loads per week on average.

Gattoni didn’t discuss the reasons for that drop in utilization, but slower general economic growth in 2015 may be a factor. April and May were banner months in 2014, when U.S. gross domestic product expanded 4.6 percent in the second quarter after a frigid winter.

Increasingly, trucking companies and other businesses are having a hard time improving on “historic” levels of volume and revenue enjoyed in the second quarter of 2014.

This year, the winter was not quite as frigid, and growth has been more modest. Although the 0.7 percent contraction in GDP in the first quarter was less severe than the 2.1 percent drop in the same quarter a year ago, the second quarter rebound isn’t expected to go as high.

Trucking activity in the 12 Federal Reserve System districts was “mixed” in April and May, according to the latest Federal Reserve “Beige Book” report on the U.S. economy.

Demand for trucking services was characterized as brisk in the New York Federal Reserve District, while slight increases relative to the last report were noted in the Richmond, Virginia District. Trucking activity expanded year over year in the Atlanta District, but fell in the Philadelphia District, the Federal Reserve said.

Trucking firms in the Dallas District saw mixed demand, and reports on freight volumes were mixed in the Cleveland District, where the slowdown in the steel and energy industries was cited as a source of weakness.

Overall, the June 3 Beige Book report suggested an economy growing at a moderate pace after shrinking in the first quarter, an assessment supported by the stronger-than-expected jobs report from the Labor Department for May. For-hire trucking companies added 8,600 jobs last month, while the U.S. economy as a whole created 280,000 new jobs.

That’s the highest number of trucks deployed by the carrier since 2008. Gattoni expects total revenue at Landstar, with $1.8 billion in 2014 revenue the largest U.S. truckload carrier after Swift Transportation and Schneider National, to climb 2 to 8 percent in the second quarter, to between $830 million and $880 million. That’s in line with earlier projections. In the first quarter, Landstar revenue rose 10.8 percent to $762.4 million.