J.B. Hunt's intermodal volume rose 7 percent in Q1, but revenue per load was flat and operating income fell 1 percent. Second quarter results are likely to be much worse given the coronavirus pandemic. Photo credit: Ari Ashe/JOC.com.

Freight volumes in the second quarter may plunge more than 10 percent in intermodal, but it’s too soon to determine how long the coronavirus disease 2019 (COVID-19) will depress truck and rail demand, according to J.B. Hunt Transport Services.

The transportation provider has been unable to reach all its customers to discuss the impact of the coronavirus on their individual operations, it said Tuesday on an earnings call, noting small and medium-sized businesses have been most affected.

First-quarter results were largely unaffected by coronavirus because the impact only began to be felt in any significant way in mid-March, too late to undo the stronger conditions through the first 10 weeks of the year. Intermodal volume increased 7 percent year over year in the first quarter, including a 1 percent increase in the eastern US and a 11 percent jump on cross-country hauls between the West Coast and eastern US.

Intermodal volume was up 7 percent in January, 8 percent in February, and 5 percent in March, although J.B. Hunt acknowledged there was a “meaningful drop off in volumes in late March and into April” in the mid- to high-single digits year over year.

“We don't have visibility into what probably the back half of May and June represent [yet], but certainly for the next three to four weeks I would expect that [downward] trend to continue,”  Darren Field, J.B. Hunt’s executive vice president of intermodal, said on the earnings call. 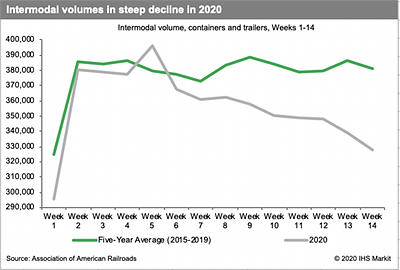 Intermodal volume in North America in Week 14 — the week ending April 3 — was the lowest since 2011, with 327,962 containers and trailers. But it was only 0.2 percent higher than that 2011 mark, meaning intermodal was close to suffering its worst week since the Great Recession of 2008-09. Week 13 was the worst final week of a quarter since 2013, an indication how grim conditions are right now.

Amit Mehotra, rail industry analyst with Deutsche Bank, believes coronavirus will cost the industry some $9 billion in revenue, including intermodal and railcar business, and $4.7 billion in profits this year. He estimates volume across all commodity groups will drop 14 percent year over year in 2020 “roughly consistent with broad-based volume declines endured during the financial crisis in 2009, and significantly worse than declines observed between 2014 and 2016 [the last freight recession].”

Coronavirus has also caused a dislocation of capacity, interrupting the traditional flow of imports into Southern California and intermodal transportation across the country.

“We have had business from the Midwest, from the interior of the country, for consumer products to support the population base on the West Coast that has surged up a little bit,” Field said. “So, you've got an increase in volume in backhaul lanes and a loss of volume in headhaul lanes.”

Reaching customers is a challenge

Shelley Simpson, J.B. Hunt’s chief commercial officer, explained that small and medium-sized shippers have been the most impacted of its customer base. With so many non-essential businesses closed, purchase orders non-existent, and distribution centers either shut or filled to capacity because products are not moving, it has been difficult to reach everyone.

“We have had communication with some customers that are calling us,” Simpson said on the call. “Our bigger concern are customers that we're not hearing from, and so that has been, over the last several weeks, a main objective of our sales organization to really lean in and work closely with customers.”

“It's hard to get meetings,” added J.B. Hunt CEO John Roberts. “We're trying to do some Microsoft Teams meetings, Zoom, you name it, but those are slowing down. Customers [shippers] have other priorities right now, so we're seeing our verbal [communication] slow down just a little bit, and we expect that to continue just a little bit longer.”

For customers who are responding, Simpson said the challenge is to maintain a regular dialogue given how rapidly the situation is developing with stay-at-home orders and discussion about when and how to reopen parts of the US economy.

“It's too early to call [forecast] the entire year,” she said. “I think I could talk about the next couple of weeks and have a lot of confidence. And then as we get past that, I get less and less confident. We're spending a lot of time taking care of our people and focusing on meeting the promises for our customers.”

Similar to intermodal, it seems the second quarter will be a downer in truckload business, especially after the Cass Freight Shipments Index fell 9.2 percent year over year in March, while the Cass Truckload Linehaul Index, which measures truck rates absent fuel and other surcharges, dropped 6.6 percent. The truckload pricing index has fallen between 6.1 and 6.6 percent year over year each month to date in 2020.

For the closed businesses, bid season has essentially stalled. While some truck and intermodal shippers completed their bids before the disruption took hold in the United States in March, many others were in the middle of bid season.

It’s a dynamic that also occurred in ocean transportation last month when many beneficial cargo owners (BCOs) asked to extend current contracts until they could assess how coronavirus would impact supply chains.

“For the last four weeks we have had a handful of customers that received results, but they're not in a good spot to implement that bid and they've delayed the start of it,” Field said. “An example would just be a May 1st to a June 1st delay in new pricing. Some of the customers have effectively said, ‘We will delay indefinitely until we can give you a different answer.’”