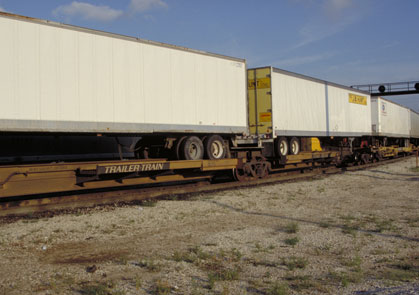 Trucking’s early third quarter earnings reports looked better than might be expected in a sluggish and inconsistent economy. That’s largely because the first publicly owned motor carriers past the quarterly post took advantage of opportunities to move more freight by intermodal rail, diversified their over-the-road services and, most important, protected profit margins in the quarter.

Their performance speaks for the growing capability of many trucking operators to maintain profitability even in a slow growth or depressed market through careful management of capacity and pricing as well as improved customer service. That, in turn, bodes well for shippers who depend on a consistent supply of trucks.

“The company’s intermodal juggernaut rolled on despite continuing macro-economic sluggishness,” John G. Larkin, managing director and head of transportation capital research at Stifel, said in a note to investors. J.B. Hunt’s 15 percent annualized earnings growth should compare favorably with most other transportation companies in a challenging environment, Larkin said.

The intermodal division’s operating income, $118 million, accounted for 72 percent of all operating profit at J.B. Hunt. The division increased its dray tractor capacity 14.2 percent, adding more than 500 tractors over the past year, as Hunt put capacity where it could best secure a profitable return. Revenue per load rose by $10 to $2,163.

Private fleet conversions aimed at securing truck capacity kicked Hunt’s dedicated division revenue up 17 percent to $319 million, although the division’s revenue per truck per week dropped 3 percent, largely because of the need to absorb a large amount of customer-provided equipment. New accounts added 972 revenue-producing trucks by the end of the quarter, the company said. The division’s operating profit rose 14 percent to $29.3 million and could have climbed further if not for higher driver recruiting, relocation and other personnel costs. Hunt’s non-asset Integrated Capacity Solutions revenue rose 13 percent to $137 million thanks to a 4 percent increase in load volume and higher revenue per load, but the brokerage business’s operating profit dropped 48 percent to $2.8 million, in part because of higher personnel costs and higher rates paid to third-party truckload carriers.

Marten Transport had the highest net profit of any quarter in its history, $8 million on $167.1 million in operating revenue. The refrigerated carrier also celebrated its 14th straight year-over-year increase in quarterly profitability, Chairman and CEO Randolph L. Marten said. “We believe our continued growth and profitability are directly related to the strong positioning of our truckload operations, as well as diversification of our service offerings in intermodal and brokerage,” he said.

Operating revenue at Marten increased 2.1 percent from a year earlier, to $167.1 million. Excluding fuel surcharges, revenue rose 7 percent to $134.5 million. That increase reflected new business — total truckload, intermodal and brokered loads shot up 11.9 percent year-over-year. Marten bucked industry trends by adding capacity — something more profitable businesses can afford to do. The Mondovi, Wis.-based carrier built up its average truck count 3 percent to 2,237, increased total miles driven in the quarter by 4.8 percent to 58.6 million and reduced non-revenue miles per trip by 1 percent to 10.4 percent. The actual number of total tractors at the end of the quarter was 2,301, up 1.5 percent from a year earlier.

Revenue per tractor increased 3.3 percent from a year earlier, on top of a 7.3 percent increase in the third quarter of 2012 over 2011, according to Marten. The carrier’s 89.9 operating ratio, excluding fuel surcharges, was its second best in 28 years.

“These numbers are especially impressive in light of the change in hours of service rules, which crimped many carriers’ equipment utilization,” Larkin wrote.

Heartland Express saw the greatest leap in profit of the three carriers, 27.6 percent, despite a 3.2 percent decline in revenue in the quarter to $130.6 million.

“Improvements in rates were more than offset by new government regulations on hours of service ... a competitive environment for the high quality, professional truck drivers who meet our hiring requirements, an inconsistent freight environment, and slightly lower fuel surcharge revenue,” the company said in a statement.

Those cuts helped Heartland, long one of the most profitable truckload carriers, expand its net margin for the quarter to 12.1 percent, compared with 9.2 percent in the year-earlier quarter, and drove its operating ratio down to 80.1.