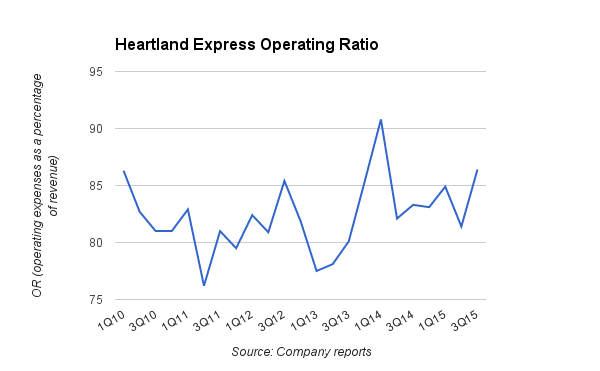 The quarter-to-quarter slips in revenue and profit, 4.8 percent and 35.2 percent, respectively, coincide with what appears to be a widespread slowdown in freight demand, caused in part by overstocking of inventories during and in the wake of the West Coast port crisis.

The company’s operating ratio, a measure of profitability, rose from 83.3 a year ago to 86.4 in the third quarter. Heartland is still one of the most profitable publicly owned truckload carriers, but excluding a 90.8 operating ratio in the storm-wracked first quarter of 2014, last quarter’s OR was the worst on record for the company since 2010.

Heartland is the latest truckload carrier to hit serious speed bumps, if not roadblocks, in the third quarter, as the U.S. economy stagnated and inventories expanded. To make matters worse, many carriers added capacity earlier in the year, when shipper forecasts looked better.

In its quarterly report, Heartland said it added 380 new tractors during the third quarter and has approximately 600 new tractors scheduled for delivery prior to the end of the year. The carrier didn't specify how many of those tractors were replacement units for older equipment. The average age of Heartland's tractor fleet is 1.6 years, compared with 2.1 years a year ago.

Shippers consider capacity “adequate” at this point, and it may tip toward “abundant” if the fourth quarter doesn’t include more substantial restocking and pre-holiday consumer spending.

The Institute for Supply Management PMI index indicates manufacturing continues to expand, albeit barely, “but we find this very hard to believe,” Ross said. The PMI Index fell to 50.9 in September from 51.1 in August. Any reading below 50 indicates contraction. The not-so-bad news is that Ross expects the industrial economy to “bottom out” in the “next quarter or two.”

Trucking operators are making adjustments to what appears to be the new reality: lower freight demand and excess capacity, served up with higher driver wages and equipment costs. Lower fuel surcharge revenue also is dragging down total revenue at many truckload carriers.

Heartland also raised driver wages 13 percent in two stages, in last November and in January, and saw the value of used trucks it traded drop by $3.9 million, the company said.

“While driver attrition has slowed since implementation of our updated pay package in late 2014 and early 2015, attracting and retaining professional drivers that meet our high standards of safety continues to be an ongoing challenge,” the company said.