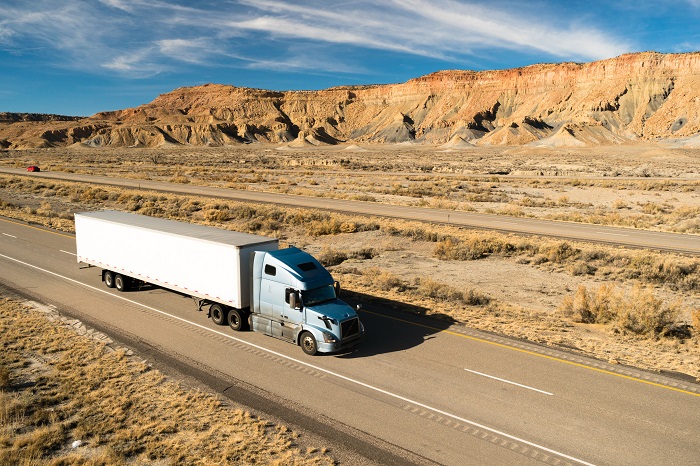 A truck travels in the United States. Photo credit: Shutterstock.com.

Widespread use of electronic logging devices (ELDs) could help transform not just how truck drivers log their time, but how they are paid. A growing number of trucking operators are considering activity-based pay as a supplement to mileage-based pay, said Jerry Robertson, chief technology officer of Bolt System, which develops internet-based fleet management software.

Activity-based pay is one change ELDs could bring to truck drivers, and that could put more change in their pockets. Shippers with private fleets are said to lead in this area, which could spread to more for-hire trucking companies struggling to recruit drivers. An activity-based pay system may be a small price to pay for more secure capacity in the form of truck drivers.

“The truck driver isn’t just driving a truck, he’s driving an enormous set of data,” Robertson said. “The truckers are not totally aware of that. We’ve got all these devices in these trucks, all these sensors collecting data.” With the ELD mandate, that data set is expanding exponentially.

Accurate, digitized driver hours and work information will make it easier to change pay, he said.

In the tightest trucking market in more than decade, any potential means of keeping drivers behind the wheel and happy in their work is important to shippers. “Our driver is the first point of contact with our customers,” Jeffrey L. Meyer, group manager for transportation at Nestlé Purina PetCare, said at the Transportation & Logistics Council (T&LC) conference last week.

Shippers at the T&LC event in Charleston, South Carolina, said they were strapped for truck capacity, and they realized the driver is the key to getting space for freight at a good price. “We need to learn to treat drivers like customers,” Julie Thuston, assistant vice president of operations and account management at logistics provider Unyson said.

Blended pay plans may be needed

Trucking companies say they are dedicating more of their rate increases to driver compensation, but higher pay alone may not be the answer to a shortage of qualified drivers at large trucking companies. Pay for non-driving, on-duty time, and pay packages that blend per-mile with hourly, per diem, per-load, or activity-based pay may be needed.

“If we intermingle static data about business requirements with the dynamic data from the truck, we can do quite a bit as far as activity-based pay is concerned,” Robertson said. Drivers typically do much more than drive the truck to its destination, he said. “Perhaps he has to check on the temperature of the trailer, or make sure a product has quilting around it.”

In fact, there is a host of tasks and activities required of drivers essential to keeping the wheels of commerce turning, from pre-trip safety checks to verifying delivery information.

“There’s a reason to pay that driver extra money to do the job they’re doing,” said Robertson. And with the data that will soon be available from ELDs, adjusting pay will be easier.

“The legacy systems developed 10 or 15 years ago didn’t have access to the data we have today,” said Robertson. As ELDs lead to broader collection of truck-borne data, “drivers are not going to be just a person out there driving a truck,” he said, “they’ll be as important as the sale team in promoting their company’s overall capabilities, not just delivery of the product.”

Adding task-based pay to driver compensation packages could make pay more transparent, more fairly compensate drivers for non-driving work (in some cases, a significant portion of their workload), make trucking operations more efficient, and help educate shippers about what drivers do for them and what they, in the end, are paying truckers for, Robertson said.

Activity-based pay may not be widespread in trucking today, but Robertson sees task-based compensation spreading from private fleets to dedicated carriers to the general for-hire trucking market. Bolt System began offering an activity-based pay management capability in its fleet software several years ago after studying first hand how drivers handle their jobs.

“We had a private fleet customer that had some problems with pay, so we put people in their trucks to see what was really happening with the truck drivers,” Robertson said. “Our employees would go out and document what the drivers were actually doing. We discovered all this activity was going on that the fleet managers or the company really didn’t know about.”

Private fleets, in particular, often have drivers doing tasks such as loading and unloading, stocking store shelves, or doing some assembly work on a product. But there are dozens of tasks that could be tracked and built into an activity-based pay system, he said. “It’s a great help for [shipper] customers to understand the different activities drivers encounter.”

One such Bolt customer, Mennel Milling of Fostoria, Ohio, pays its private fleet drivers in segments, extracting data from PeopleNet ELDs. Pay can be broken out per mile, or by flat load rate, and pay for loading can be added to the mix. Pay can vary by time of day, with multipliers that kick in to assign additional pay value at specific times, such as after midnight on a Friday.

That kind of compensation scheme can capture complexities in a driver’s job that are not reflected in per-mile pay or hourly pay schemes, Robertson said. And the spread of onboard computers under the ELD mandate will make this type of pay easier to offer. “We can easily help our customers document work, with various pay standards, and streamline that into payroll.”

Activity-based pay increasingly will become part of a mix that includes hourly pay for some truck drivers. “At this point there’s no reason you can’t pay people by the hour,” said Michael Belzer, associate professor of economics at Wayne State University in Detroit, who has studied trucking for decades. With ELDs tracking driver hours, “the time is right for making a change,” he said.

“I think it has to be a blend” of different types of compensation, said Robertson. “If you go to hourly pay you introduce a new potential problem: the driver, who says, ‘I don’t really care how long I wait to be unloaded. I’m being paid by the hour, so if I don’t make that delivery, so what?’ That’s going to be as questionable to the fleet owner as cents-per-mile pay is to the driver.”

With more technology extracting data from the truck, however, it should become easier to squeeze inefficiencies out of the supply chain, wherever they originate. Truck drivers will be able to prove they arrived at a facility hours before being allowed to unload, he said. “The driver shouldn’t have to pay for that. Let’s put the accountability with the shipper or consignee.”