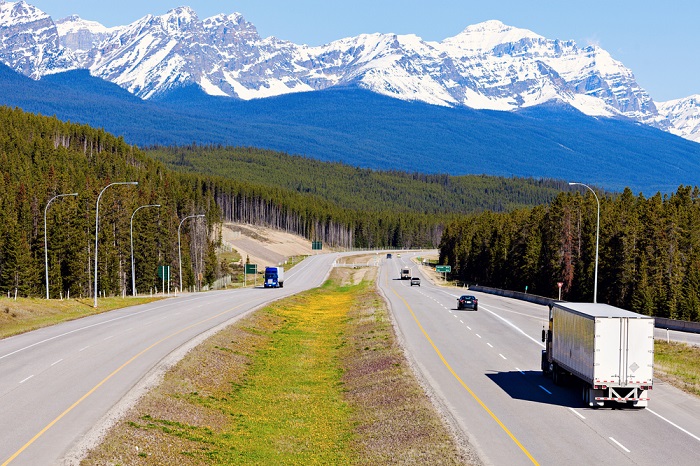 When it takes effect, Canada’s electronic logging device (ELD) mandate will hit delivery of containerized goods from Montreal to the Toronto area hard, spurring shippers to transload cargo to mitigate rising delivery costs on that route and other legs. US shippers took a similar hit when the US ELD mandate disrupted truck capacity in inter-city lanes last December.

The problem is that drayage truckers who usually make the 330-mile trip from Montreal to Toronto and then return the same day might find it hard to make the return trip. It’s roughly an 11-hour roundtrip between the two cities, and adding another hour for cargo pickup and drop-off puts truckers at about 12 hours, giving them one extra hour of cushion before they exhaust their eligible driving hours. More time at the terminal and/or distribution centers and highway traffic can imperil that timeline, pushing up costs.

Canada’s ELD mandate, which takes effect in late 2019, will require truckers to record their hours of service (HOS) with ELDs. That’s expected to further tighten Canadian trucking capacity, which is already hit by an aging workforce and spillover from the US ELD mandate. The rule will put more pressure on marine terminals, including the port of Montreal, to allow truckers to quickly and consistently pick up and drop off cargo, speakers said Wednesday at JOC Port Performance North America Conference in Newark, New Jersey.

The problem for Canadian shippers will be compounded by the loss of intermodal capacity in the Montreal-Toronto lane. Canadian Pacific Railway in June stopped transporting containers between Montreal and Toronto, said Martin Roy, vice president for US transportation, Groupe Robert. The service used to offer truckers short on capacity an alternative way to move containers along the 350-mile route, and CN moved 1,200 containers a week, he said.

“So that was kind of a buffer in terms of the spikes [in demand] during the week that is no longer available,” he said of the lost CP rail service. “We're already facing a shortage big time. I expect when the ELD would kick in we could really see something of a big crunch.”

He said the ELD introduction would be a “major factor,” with trucking capacity as much as 30 percent lower immediately after the ELD takes effect — at least until truckers increase pay, possibly bring in immigrant drivers from abroad, and shippers adapt their supply chains. One benefit for shippers, however, is that they have already seen the impact of similar rules in the United States and can move proactively to secure trucking capacity or adjust their supply chain to deal with the situation, he said.

The introduction of the rules, which are similar to those that took effect in the United States a year ago, will squeeze a sector already stressed by rising cargo volumes. ELD rules in the US dramatically tightened capacity as drivers suddenly had to follow the HOS rules strictly, and the rule propelled double-digit spot and contract truck rate increases.

Although the ELD rules have been published in the Dec. 16, 2017 Canada Gazette and are expected to take effect in 2019, Transport Canada has not released a date for the rules’ implementation.

Transport Canada says ELDs are needed because “the information generated from these daily [paper] logs can be falsified, incomplete, duplicated or missing altogether in an effort to avoid accountability for non-compliance with the [HOS] regulations.”

In an executive summary, the agency said, “it can be difficult and frequently impossible for roadside enforcement or the motor carrier to detect non-compliance by the driver simply by viewing the daily logs.”

“I see a cost escalation is going to be a definite, because there's sunken costs that we can't recover with our assets,” said Marc Bibeau, president and CEO of the OEC Group.

“I see the intermodal and transload operation gaining momentum, because you don’t have that log restriction” with those moves, he said. “That's going to be ways that we're going to have to relieve the pressure from a lack of capacity, drivers, and challenges.” Also important to relieving pressure on trucking capacity will be ensuring that marine terminals are as efficient as possible so that trucks can complete a delivery or pickup swiftly and move on to the next one, he said.

Cargo volumes through the top four Canadian ports — Vancouver, Prince Rupert, Halifax, and Montreal — increased by 7.5 percent to 4.56 million TEU in the first three quarters of 2018, compared with the same period in 2017, according to data from the ports. That followed a 10.3 percent volume increase in 2017 over the year before.

CP said in October that it expects the tighter truck capacity triggered in Canada by the introduction of the ELD regulations will allow the railroad’s domestic service to attract freight. The railroad, Canada’s second largest, said it expects trucking pressure to build through 2019 and into 2020. John Brooks, CP’s chief marketing officer, said the second half of 2019 in particular would provide “road to rail opportunities.”