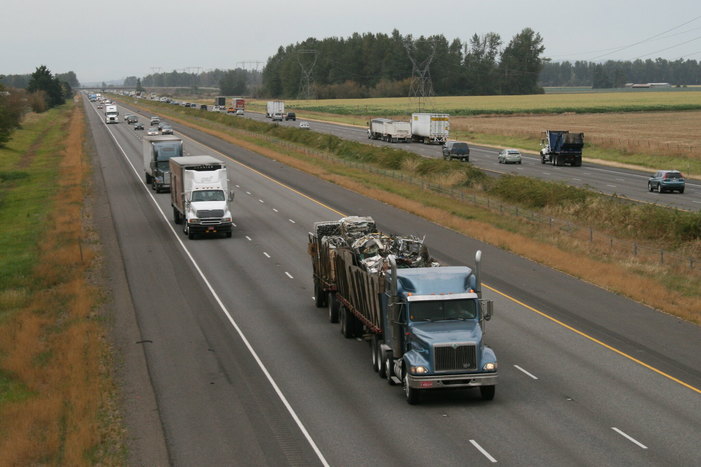 Trucking spot rates, which are in a typical mid-winter lull, should exceed 2019 levels when the weather warms in the spring. Photo credit: Born1945/Flickr.

Shippers should prepare for truck capacity to tighten in the coming months and pricing power to flip toward carriers later this year, logistics provider Coyote Logistics said in an analysis Wednesday.

“You do see a death cross forming as spot rates go up and contract rates fade down,” Chris Pickett, chief strategy officer of Coyote Logistics, said during a webinar Wednesday. “As those lines cross, a squeeze will begin to disrupt routing guides and possibly 2020 freight budgets as early as the second quarter.”

Truckload markets have rapidly shifted in the last two years. In 2018, routing guides fell apart because truck capacity tightened to historic levels, causing spot truck rates to rise more than 20 percent. Last year, carriers overreacted by injecting too much new capacity and spot rates plunged more than 20 percent, returning conditions to a pre-2018 level. The Coyote Curve forecast is for this year to fall in the middle — not as bad as 2019, nor as good as 2018.

Contract and spot truckload rates show precursors of a market not seen since early 2017. Despite a mid-winter lull in demand, the year-over-year percentage change in spot rates is better than nine months ago. Spot rates plunged 20 percent year over year in May 2019, according to DAT Solutions and JOC data. In January 2020, DAT reported a 6 percent decline and JOC’s rate was down 3.2 percent. Contract rates fell more than 10 percent in January, however, according to DAT. It’s not unusual because spot markets tend to be a leading indicator, then contract rates follow later, which happened in 2017.

Pickett said spot rates will turn positive on a year-over-year basis very soon, but contract rates will remain down compared with 2019 rates, for now.

For large shippers with contracts, “you will have a great procurement event. But to the extent those rates hold up is unknown and it will be much different than how things felt in 2019,” Pickett said. He advises smaller shippers to budget for higher spot rates and extra time to find capacity.

Even a recession will not change his forecast, Pickett said, citing an example of 2008 when spot rates rose even in the Great Recession. The size and scope of the spot market recovery is based on other factors too, he said.

Diesel rates are an unknown

Pickett said fuel has been difficult to nail down.

“Six weeks ago, we were talking about IMO 2020 and tensions in Iran, so [we thought] fuel would trend higher,” he said on the webinar. “A week or two ago, [the] coronavirus in China, which will have a crippling effect on the Chinese economy, and possibly a much broader impact on the global economy, therefore oil prices go down. Now, talks of OPEC slashing production, which causes oil prices to go up.”

Oil markets are important because shippers pay a fuel surcharge which is usually indexed to diesel rates. If fuel prices go up, so does the surcharge. It’s a positive for intermodal because there are many customers using a single train versus one customer per truck. Railroads can spread out fuel costs, whereas a trucking company cannot. Intermodal rates become a better bargain.

There are several regulatory issues that could cause capacity to tighten, including the Drug and Alcohol Clearinghouse, hair follicle testing, rising insurance premiums, and an adverse ruling on California’s AB5.

The clearinghouse is a federally run database implemented last month that tracks positive drug tests recorded by a driver. Trucking companies must do a full query of the database when screening an applicant, then must conduct a limited query once a year on each driver.

The clearinghouse will pressure fleets not to hire someone with a recent violation because of insurance and legal liabilities.

While hair follicle testing isn’t mandatory, many large fleets are beginning to use this more rigorous test, citing safety and greater accuracy.

While California’s AB5 legislation does not apply to trucking because of a preliminary injunction granted last month, the ultimate outcome of the case is up in the air as a higher court can quash the injunction.

What can shippers do now?

The talk of 2018 involved being a shipper of choice. If you aren’t one, Pickett said remember what happened a few years ago.

Conversion to intermodal “is also something worth looking into right now” to have a plan in place if capacity tightens, Pickett said.

Although JOC’s Domestic Intermodal Savings Index (ISI) showed shippers saved less money in 2019 than the five-year average, the data shows an inflection point similar to the Coyote Curve. JOC’s index tracks how much of a discount a shipper receives using intermodal versus truckload.

JOC’s Spot ISI contracted year over year for 16 consecutive months between February 2018 and May 2019. But since then, the index has risen year over year. JOC’s Contract ISI remains negative year over year, but a shipper should still anticipate saving about 20 percent on intermodal.

Pickett also recommends a plan to measure carrier performance and a well-communicated process about what happens if a carrier doesn’t perform adequately. If a shipper cannot measure tender acceptance, for example, then Pickett said it’s difficult to do anything when the top carrier in the routing guide starts to reject your freight.