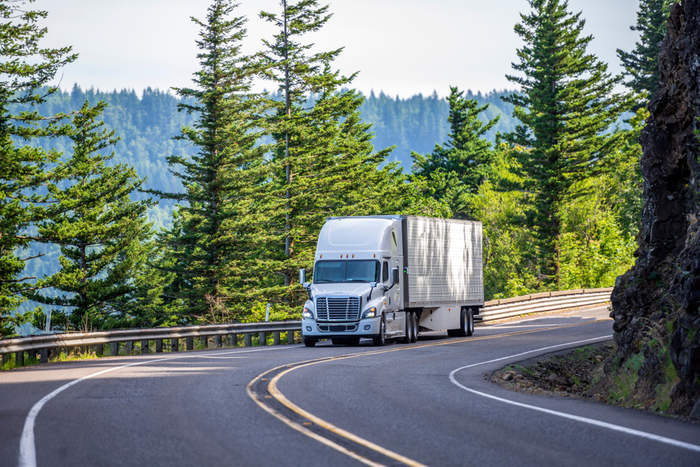 Trucking demand is plummeting amid pandemic and may be slow to recover. Photo credit: Shutterstock.com.

This month is likely to be marked by an overall collapse in US truck demand, but a group of surveyed shipping and logistics executives believe that “peak disruption” is nearing. And while some of those executives are hoping for a more V-shaped recovery for their transportation businesses, expectations are not great for a fast recovery for the overall US economy.

A Morgan Stanley Research survey of 400 transportation and logistics executives indicates many believe supply chains are nearing peak disruption, possibly within three months. That may suggest the US transportation sector, at least, could be poised for a “V-shaped” recovery, Morgan Stanley said, “even if the broader economy settles into a U- or L-shaped recovery.”

IHS Markit believes the same may be true for the manufacturing sector, once inventories are drawn down. But the parent company of JOC.com doesn’t expect a quick return to business as normal. The anticipated wave of small business bankruptcies in coming weeks could further damage business infrastructure and challenge the recovery, according to IHS Markit.

The expected reluctance of people to engage in activities that puts them in contact with groups of people as the coronavirus disease 2019 (COVID-19) lingers — as well as potential difficulty getting millions of newly unemployed workers back on a job — make a U- or even an L-shaped recovery more likely, according to IHS Markit chief economist Nariman Behravesh.

But shippers were also more optimistic than third-party logistics providers (3PLs) or trucking companies in the run-up to the electronic logging device (ELD) mandate in 2017, with only about 20 percent telling JOC.com at the time that they had made changes to processes and procedures to prepare for the impact of ELDs. The capacity crunch of 2018 proved the more pessimistic 3PLs and carriers right.

April 2020 will be remembered as the month the floor vanished beneath many trucking companies. Demand destruction caused by business shutdowns amid the coronavirus pandemic led to a steep drop in truckload freight volumes and in transportation rates, especially in the spot truckload market, in the first two weeks of April.

The spot market dry-van freight volumes moving through DAT Solutions load boards plunged 20 percent in the first two weeks of April, while the national average dry-van rate dropped 8 cents to $1.78 per mile, including fuel surcharges, in the week that ended April 12, DAT said Tuesday. That DAT rate averaged $1.87 per mile in March and $1.79 per mile in February.

The Cass Freight Shipments Index, which first turned negative in December 2018, fell 9.2 percent year over year in March, while the Cass Truckload Linehaul Index, which measures truck rates absent fuel and other surcharges, dropped 6.6 percent. The truckload pricing index has fallen between 6.1 and 6.6 percent year over year each month to date in 2020.

Sequentially, the March freight shipments index rose 0.2 percent from February, likely reflecting the surge in demand that pushed spot truckload rates higher in March. “April will undoubtedly be worse and likely the worst month in a long time. There has been a clear divide between winners and losers” following the closure of non-essential businesses, Cass Information Systems said.

The divide is between those hauling goods deemed essential and every other carrier.

“This ends any chance of second quarter 2020 seeing year-over-year growth in domestic US shipments and freight costs,” Cass Information Systems said Monday. “This has quickly gone from a China production concern to a US [and global] consumer spending problem. No business, no jobs, and no income for many leads to much less freight moving around.”

How tight truck capacity becomes later in 2020 depends on the extent and speed of the recovery. “We’re watching capacity exits and a potential re-stocking event to drive rates higher again later this year,” Cass said in its report. “When the economy re-opens (and it will), we’ll see how many truckers are left and how much freight needs to be moved.”