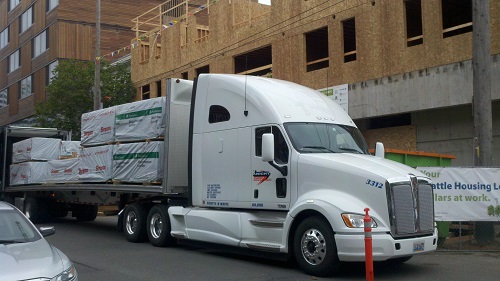 Truckload spot rates may be slipping, but Knight-Swift Transportation Holdings, the largest US truckload operator, appears to be more than holding its own at the bottom line. The holding company raised its earnings guidance Thursday, giving battered trucking stocks a shot in the arm and signaling confidence in a freight market that has softened in recent weeks.

Knight-Swift now expects adjusted earnings per share (EPS) for the fourth quarter to range from 91 to 93 cents per share, and that’s 24 to 28 percent higher than the company’s previous estimate. For the first quarter of 2019, the Phoenix-based company said it expects adjusted EPS of 52 to 55 cents per share, slightly higher than its original expectation of 50 to 54 cents.
By the time the owner of Swift Transportation and Knight Transportation releases their earnings report Jan. 29, the state of the trucking market in the first quarter should be more clear. Knight-Swift and other major carriers have exited the best year for trucking companies in a decade and are traveling a much less certain and potentially rougher road in 2019.

Carriers that expanded profits in 2018 may find it harder to match that performance in 2019, when the US economy is expected to slow.

Analysts are lowering forecasts of how high truckload rates will rise this year. Projections that only a few months ago called for price hikes in the 5 to 8 percent range have been reduced to 2 to 5 percent. That still comes on top of double-digit increases last year, and even, say, a 5 percent cut in rates would leave many shippers paying more than in 2017.

But shippers' prospects in US truckload contract talks look better than they did a few months ago, thanks to flattening or falling spot market prices and a changing economic landscape. In December, US shipment volume dropped 1.7 percent from November and 0.8 percent year over year, the first annualized decrease in 24 months, according to the Cass Freight Index.

Cass is not yet alarmed, however. “Even if it is at a slower rate, as long as the volume of freight continues to expand, we see no reason to turn bearish in our economic outlook,” analyst Donald Broughton, author of the Cass indices, said in the December report, released Wednesday. The US economy is still growing, “just not at the rate it was” a year ago, he said.

Even with the economy moving more slowly, “demand is exceeding capacity in most modes of transportation by a material amount,” Broughton said in the report. A 10 percent year-over-year increase in the Cass shipper expenditures index indicated capacity was still tight as recently as December, he said, as shippers rushed to get goods to consumers before the holidays.

“Rates for the year are not likely to go negative, though they are likely to be lower than we had previously forecast,” Cowen Research analysts said in a Jan. 14 report. Cowen expects that truckload capacity and spot rates will “normalize” in 2019 off their “mid-2018 highs.”

“Prices should, in the absence of some surprising new pressure, fall,” Noel Perry, transportation economist and principal of Transport Futures said in the Cowen report. “After peaking in July, spot prices are down more than 20 percent. However, they are still almost 20 percent above normal. How much more will they fall?” He expects contract rates to peak late this year.

Last year was replete with surprising new pressures, from trade wars to the electronic logging device (ELD) mandate that, when added to a fast-growing economy, tightened truck capacity, changed shipping and distribution patterns, and pushed up transportation rates. Logistics managers that survived 2018 are more likely to expect surprises in 2019.