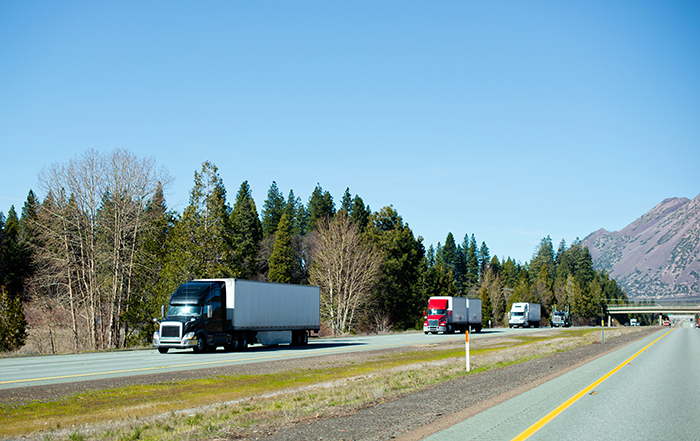 Excess capacity is blunting the impact of rising volumes on trucking pricing.

Freight demand in North America appears to be rising, but the latest earnings report from the largest US freight broker shows truckload pricing is lagging. North American freight volumes at C.H. Robinson Worldwide spiked across all modes in the first quarter, but weak truckload rates spelled lower net revenue for the $13.1 billion global brokerage and logistics operator.

In the first three months of 2017, C.H. Robinson had “13 percent volume growth across all of our services,” Clarke said. Other companies are reporting increased volumes as well, but Clarke said C.H. Robinson’s first quarter growth in freight volumes “is well ahead of the market.” The third-party logistics provider believes it is capturing market share across transportation modes.

Net revenue margin for total transportation revenue fell from 19.7 percent a year ago to 17.3 percent in the first quarter, also a decline from an 18.4 percent net revenue margin in the fourth quarter. Operating profit fell 5.5 percent, though net profit rose 2.6 percent to $122.1 million.

The primary reason for the net revenue stalemate and tighter margins was a 4 percent year-over-year decline in the average truckload rate C.H. Robinson charged shipper customers, Clarke said. C.H. Robinson's truckload costs fell 2 percent in the quarter. “We saw lower margins in most of the transportation services, with North American truckload margin compression having the greatest impact,” Clarke said.

C.H. Robinson’s earnings show there is still more than enough capacity in the truckload sector to absorb existing freight demand, keeping costs down for shippers. “The North American truckload market remains fairly balanced, as it has for the last few quarters, and pricing is very competitive given the fact that capacity is available and demand is tepid,” Clarke said.

Net truckload revenue dropped 5.5 percent to $304.1 million in the first quarter. Intermodal revenue followed a parallel and lower track, dropping 19.1 percent to $7.8 million despite the strong volume gain. "Over the past several quarters, we’ve been growing the contractual [intermodal] business at lower margins while transactional volumes are down quite a bit from last year’s first quarter," Clarke said.

Despite efforts by the largest truckload carriers to reduce their truck counts and regain some pricing power, overall truck capacity continues to grow. The number of Class 8 commercial vehicles (tractors and straight trucks), in operation rose 4.9 percent to 3.63 million in 2015, according to IHS Markit data. Preliminary data for 2016 show a further increase of 2.5 percent.

The number of active for-hire carriers is rising as well, according to QualifiedCarriers,com. From last March through December, the number of US for-hire carriers with up-to-date insurance and operating authority increased 6.4 percent, rising from 197,607 to 210,779 carriers, the risk management company said. That number has risen as the US economy expands.

C.H. Robinson added 3,600 new carriers to its network in the first quarter, compared with 2,600 carriers in the same period last year, and those new carriers handled 18,000 loads. Still, the decline in net surface transportation revenue continued into April, Wiehoff said. “In April to date, our net revenue has decreased approximately 4 percent per business day,” he said.

The situation is not likely to change absent a trigger that would tighten capacity — a spurt of higher economic growth or a regulatory change, such as the electronic logging device (ELD) mandate, that would make it tougher to use available capacity. The ELD mandate, which takes effect in December, “is a top-of-mind” topic for investors, shipper customers, and carriers, Clarke said.

“We talk to our customers and say ELDs will have an impact on the overall marketplace, whether it’s on the actual availability of capacity or the productivity of that capacity,” Clarke said. “And yet, when we have those conversations, it seems like the pricing environment continues to be challenged because routing guides are operating very effectively.”

Convincing shippers to “do something” in advance of the December compliance deadline, “has been very challenging,” he said, “despite the fact they know this is coming.” In part, that’s because it’s difficult to pinpoint just how big an impact the ELD mandate will have. Shippers are trying to lock-in lower rates now, rather than trading higher rates for capacity guarantees.