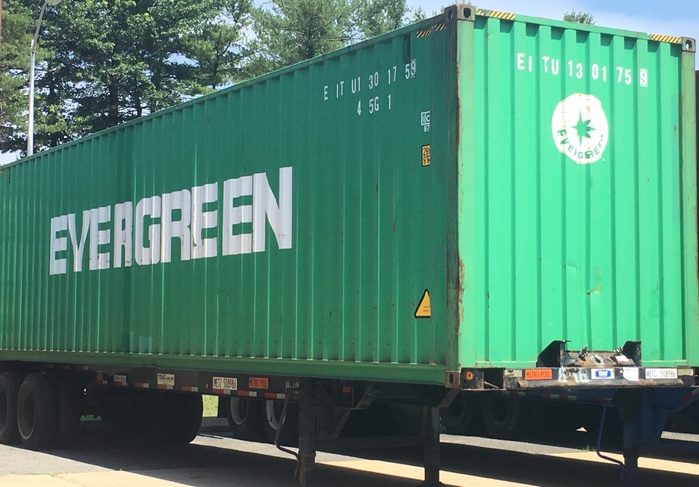 A TRAC chassis on an Evergreen Line container. TRAC believes its new arrangement with DCLI will lower the probability that BNSF Railway will run out of chassis in Dallas-Fort Worth. Photo credit: Ari Ashe.

A new agreement between TRAC Intermodal and Direct ChassisLink, Inc. (DCLI) will allow their chassis to be interchangeable in BNSF Railway’s Alliance ramp outside of Dallas-Fort Worth (DFW), reducing the likelihood of equipment shortages.

The interoperability agreement only applies during periods of high demand, according to last week’s announcement, but is a relief valve to keep containers moving to beneficial cargo owners (BCOs). Open choice supporters believe this agreement will spread into other Gulf Coast markets and be used as a lure to convince ocean carriers to exit the cooperative pool operated by Consolidated Chassis Management (CCM). These opponents want any container to be mounted onto any chassis and consider this new duopoly as a step backward.

BNSF and Union Pacific Railroad’s terminals in DFW are wheel-mounted facilities, which means crews put all incoming containers onto chassis based on ocean carrier alliances. Even merchant haulage containers are placed on pool chassis before the driver arrives. When volume is manageable, wheel-mounted terminals can offer a quicker drop-and-hook environment. But when there are volume spikes, this operating model can quickly turn into chassis outages. In a grounded facility, merchant haulage moves may never touch a pool chassis if a drayman provides his own equipment.

Under this new agreement, BNSF can use DCLI chassis on CMA CGM/APL, Ocean Network Express (ONE), Yang Ming, and Zim Integrated Shipping Services containers when there is a TRAC shortage. TRAC and DCLI consider this a “just in case” backup should supply run low to prevent an outage, like the TRAC situation in UP’s Marion facility in January.

Open choice advocates think it’s improper for ocean carriers and railroads to dictate which chassis is used on merchant haulage. It’s possible to pay for a flip from a pool chassis to a private chassis, but the charge is usually $50 to $100 per container and lines can be long.

Open choice advocates believe it’s unfair to charge because containers should be mounted on the first available chassis, contributed by any chassis provider. Flips, though, offer a modicum of choice, an option. They are also done routinely in DFW, according to drayage provider Gulf Winds International.

“We have no issues with using private equipment in DFW. We do it everyday in DFW at the wheeled facilities,” said Patrick Maher, executive vice president of Gulf Winds.

Tyler Rushforth, executive director of the Intermodal Motor Carrier Conference, a group within the American Trucking Associations, called the TRAC-DCLI arrangement a new duopoly. He said if it were about preventing outages, then the CCM pool should have been a party to this agreement.

“If this is truly about terminal fluidity and relieving congestion around the country, then this is not a complete answer,” Rushforth said. “Why not have this arrangement with everyone? Why make this an exclusive arrangement with DCLI? Adding CCM would have made a big difference. It would have sent the right signal.”

In Memphis, however, BCOs must receive a pre-authorization to flip between a TRAC or DCLI chassis onto trucker-owned equipment, according to two Memphis drayage providers. Without approval, UP and BNSF will not allow truckers to bring in their own chassis.

A source who disagrees with this announcement said that similar announcements will be forthcoming in Houston and perhaps New Orleans. The individual, who spoke on the condition of anonymity, worries this agreement will be used to lure Hamburg Sud and OOCL into a contract to leave the CCM cooperative pool.

Should this arrangement be extended into other Gulf Coast markets, expect opposition to these “duopolies,” as Rushforth called them, to grow as the sides battle over how to solve the chronic shortages hurting shippers. Open choice advocates support a solution that eliminates outages with redundancies, alternative options, and modern, safe equipment, but they also want competition rather than a two-company solution.