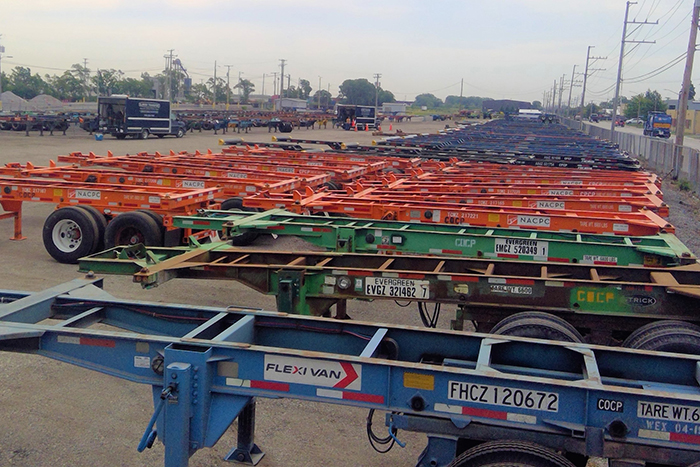 This chassis depot near CP's Bensenville yard outside Chicago allows drivers to pick up equipment before heading into the rail terminal. Photo credit: DNJ Intermodal.

Truck drivers picking up cargo owners' containers in Canadian Pacific Railway’s Bensenville Terminal near Chicago’s O’Hare International Airport will have a new location to pick up chassis, which should offer quicker turn times.

The location will be inside the DNJ Intermodal Depot, which is within CP’s property and less than a mile from the ingates to the terminal. Because CP Bensenville is a grounded rail yard, truckers must pick up chassis before getting a container. This depot will hold chassis for the Consolidated Chassis Management’s (CCM's) cooperative Chicago and Ohio pool, TRAC Intermodal-Hapag Lloyd, and the North American Chassis Pool Cooperative.

The new location is a byproduct of the reshuffling of Union Pacific Railroad yards, closing the Global III terminal and shifting all international containers from Global II to Global IV. The UP restructuring allowed chassis operators to move their Global II international chassis depot five miles north to CP Bensenville.

The move is a welcome relief for a market with chronic chassis shortages due to the huge volume of containers moving through the city. The Global IV terminal ran out of CCM chassis in January, leading to weeks of delays, rail demurrage, and container detention penalties for beneficial cargo owners (BCOs). BNSF Railway’s Logistics Park Chicago is known to have a problem with mismatching containers to the wrong chassis, violating agreements with ocean carriers, because a pool runs out of units. Unlike CP, however, UP and BNSF terminals wheel mount containers onto chassis, so there is no need for a driver-facing depot. Canadian National’s Harvey terminal is known for long turn times, but this is the result of many issues aside from chassis shortages.

“As part of an ongoing effort to ensure equipment availability for stakeholders and to better serve the Midwest rail connection, we have added this location to the Chicago market,” said CCM CEO Mike Wilson. “Rail is a critical link in the supply chain, playing an integral role in supporting inland container moves, and CCM is committed to collaborating with stakeholders to provide solutions that support the markets.”

“We have operated an intermodal depot in Indianapolis for many years and have a significant amount of experience, management, and systems to make this venture successful,” added DNJ executive vice president Steve Borgens.

DNJ Intermodal Services is a subsidiary of IMC Companies, a drayage company serving rail and marine terminals across the United States.