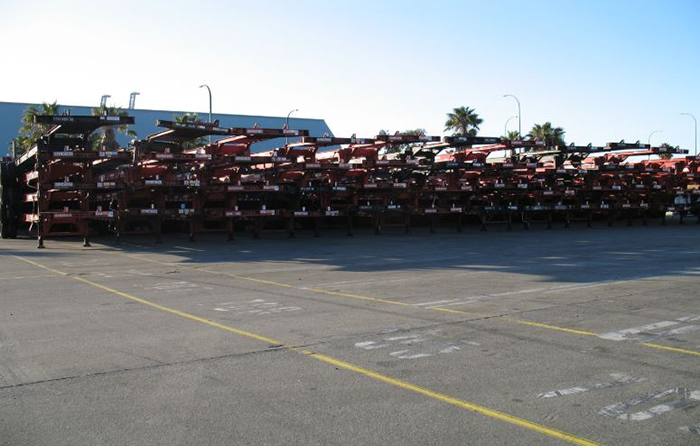 The uncertainty about who to pay for services and what to do with Hanjin Shipping containers is likely to take chassis out of service.

Hanjin Shipping’s collapse has left US motor carriers and intermodal equipment providers scrambling to limit their financial exposure and wondering what to do with chassis carrying the South Korean ocean carrier’s containers.

Shippers will feel the impact. They’ll have to pay extra fees to terminals for release of import boxes from terminals. In addition, cargo interests and truckers are exposed to costs for containers and chassis that can’t be returned to terminals or depots.

Truckers and chassis lessors said they’ve been frustrated by a lack of guidance about how to deal with the thousands of Hanjin containers scattered among US terminals, container yards, and customer warehouses.

“It’s an ugly situation,” said Bernard J. Vaughan, senior vice president and general counsel at Flexi-Van Leasing, one of the three main US providers of marine chassis. “This appears to have been so poorly planned. It’s like the fall of Saigon.”

Flexi-Van and the largest US chassis provider, TRAC Intermodal, moved to limit their risk by announcing that effective Thursday, motor carriers will be billed for costs of any of the leasing companies’ chassis that are used to haul Hanjin containers.

The equipment providers said charges for chassis involved with a movement of Hanjin boxes would be handled as merchant haulage, in which the cargo interest arranges the inland move and is responsible for payment.

By contrast, for chassis used in carrier-haulage moves, the chassis provider would have to try to collect any charges from the bankrupt carrier. It’s unclear how many Hanjin containers are booked under carrier haulage.

In an advisory to customers, TRAC said its decision to bill motor carriers for chassis used in Hanjin moves was based on the company’s “discussions with Hanjin’s management and recent public announcements from Hanjin.”

Truckers and leasing companies are struggling to figure out what to do with full and empty Hanjin containers, and with the chassis they sit on.

Motor carriers carrying Hanjin containers said the liner hasn’t told them where to return the equipment. Many terminals have refused to accept returns of empty boxes because they fear they’ll be stuck with storage and handling costs.

Truckers and cargo interests also face problems getting Hanjin import boxes out of ports. Some terminals are insisting that someone guarantee payment of up to several hundred dollars in stevedoring costs before the box can be removed from the terminal.

In most cases, cargo interests are likely to bear the cost. But even if the trucker or cargo interest agrees to pay the terminal’s fee and remove the box from the terminal for delivery to the customer, there’s another problem.

“Once the import cargo is delivered, where do we return the empty box? Nobody knows,” said Carl Frederick, agent at drayage operator Integrated Intermodal in Kearny, New Jersey. Until the box is removed from the chassis, the chassis is effectively out of service.

Amid this fluid situation, chassis lessors and truckers are trying to complete deliveries without being stuck with costs that may prove difficult or impossible to recover in a complicated bankruptcy case that’s likely to drag on for years.

Vaughan said that equipment providers’ immediate concern is to see that their equipment is safely returned to a terminal or chassis depot where it is not at risk of theft or damage and is available to be put back into service.

“It’s asset preservation at this point,” he said. “The important thing is to expeditiously complete the freight move in order to minimize cost and remove the risk of having the equipment left on the street somewhere.”