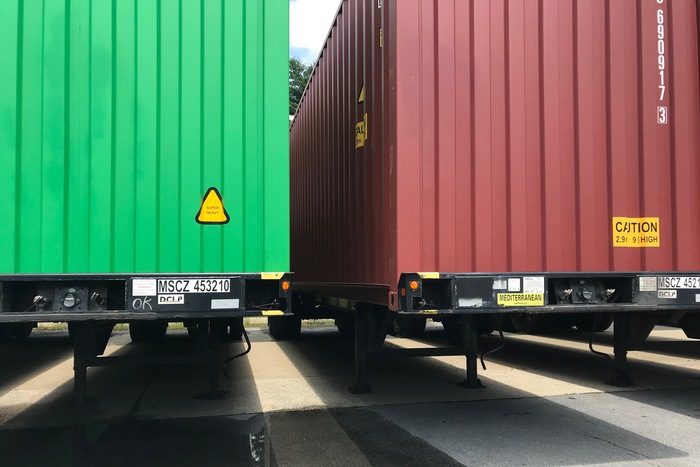 DCLI, which runs the DCLP pool, argues that refocusing efforts on its private pool in the Midwest will provide beneficial cargo owners with better service and equipment reliability. Photo credit: Ari Ashe/JOC.com.

Direct ChassisLink, Inc. (DCLI) will exit the cooperative Chicago and Ohio Valley Chassis Pool (COCP), the company confirmed Thursday, dealing a blow to advocates of so-called trucker choice to use any chassis for any container in the busiest US inland hub.

Just when DCLI will leave the cooperative is unclear, although the chassis provider told JOC.com it would be an orderly transition to prevent any supply chain disruptions.

DCLI, which contributes nearly a third of the 23,000 COCP chassis, said beneficial cargo owners (BCOs) receive better service when it has direct control over equipment.

“Our customers know that we are directly accountable to them for everything from chassis quality to meeting demand at individual locations, and we know that our well-trained employees have a handle on pool operations and can course-correct as changing circumstances may require,” the company said in an email to JOC.com.

DCLI will leave some of the 7,000 chassis in COCP when it exits the Chicago-area cooperative, although the company declined to specify how many units. Consolidated Chassis Management (CCM) was not available for comment.

DCLI said it prefers a neutral pool because it has direct control over “data intake, chassis track, physical chassis positioning based on customer forecasts, and maintenance and repair spending and oversight.” Those factors provide for better customer service, it believes.

Still, the company believes there is choice in Chicago even after its departure from COCP.

“Because there are multiple other pools operating alongside our neutral pool, chassis users continue to have many choices when it comes to sourcing a pool chassis in addition to supplying their own chassis outside any pool,” it said.

DCLI said it “reject[s] the premise that a neutral, single-contributor pool is not ‘interoperable’ within the larger containerized cargo supply chain, especially when the pool is as large as ours is. At the end of our COCP transition, our pool in the Midwest will include well over 30,000 chassis, which rivals the size of COCP at most points in its history and is larger than the current COCP pool … This creates significant interoperability within our DCLP pool in the Chicago market.”

To minimize the disruption, DCLI said it has built up excess inventory in target locations in the Midwest and will only make the switch when business can shift in a seamless way, taking into account labor and truck availability for the transition.

“These transitions were and are a natural outgrowth of our desire to provide the highest level of service to our customers at all levels of the supply chain,” DCLI said.

Those customers include five of the top nine ocean carriers in the world, including HMM, Maersk Line, and Mediterranean Shipping Co.

DCLI’s decision impacts BCOs who have door delivery contracts with ocean carriers aligned to the COCP. The international ocean carrier partners include Evergreen Shipping, Matson, Ocean Network Express, and Pacific International Lines. Even after the exit, however, the COCP will still administer more than 15,000 chassis in Chicago and the Ohio Valley.

OOCL is pulling out of COCP on March 1 to join the TRAC Intermodal neutral pool, according to two sources. Evergreen is moving from COCP to DCLI's neutral pool in some Midwest locations on March 2, but not in Chicago yet, the sources said.

The exodus would not impact merchant haulage agreements in which the ocean carrier does not include the chassis. Those arrangements allow BCOs to decide which chassis to use because they are invoiced by the chassis provider.

Blow to supporters of complete interoperability

“In a CCM interoperable chassis pool, the rail ramp operator can choose any chassis on the facility (instead of hunting for one) to discharge a container, saving time and money. With faster loading and discharging of trains, a railroad can move railcars in and out of the rail ramp more quickly,” CCM said in the presentation. “This works well with ‘precision railroading’ objectives, improving service, saving on cost, and ultimately creating more capacity for the railroad.”

Trucking operators also back “trucker choice,” citing the inefficiencies and costs of having to switch chassis between jobs, known as a “chassis split.” Productivity would rise if a truck driver could use one chassis all day, according to truckers.

Ocean carriers, in general, have been less willing to embrace unfettered inoperability. CCM has argued its vision would promote competition, lower costs, result in fewer trucks moving through marine and rail terminals, and cut turn times.

Global Shipping Outlook: A Sneak Peek at 2021
Port Performance North America: Managing Cargo Flow During a Pandemic — and Beyond
END_OF_DOCUMENT_TOKEN_TO_BE_REPLACED