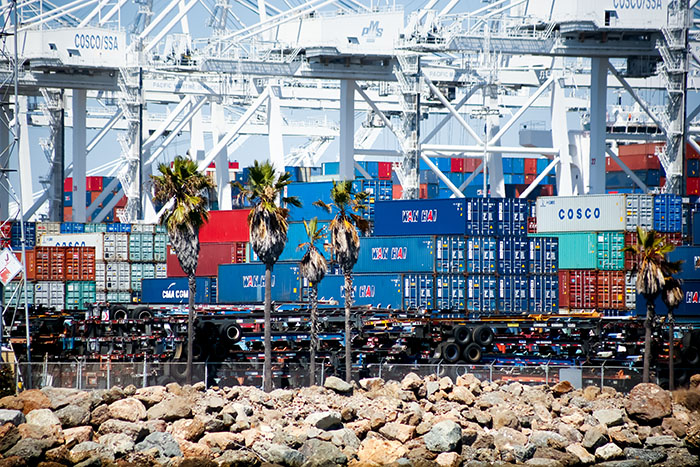 Some chassis providers bought new chassis in 2019, but for the most part, equipment providers were more likely to refurbish existing chassis due to increased US import tariffs on Chinese goods. Photo credit: David Tonelson/Shutterstock.com.

Following a shortage in January caused by front-loading of imports to avoid escalating tariffs, chassis providers at ports across the United States reported little to no disruption to equipment supply throughout 2019.

This was largely a byproduct of lower cargo volumes in the ports of Los Angeles and Long Beach and manageable single-digit growth on the East Coast, but going into 2020, chassis providers are hopeful that fleet upgrades over the last two years have made the network more resilient. Chassis providers, however, also acknowledge there is little they can do to absorb a sudden, unanticipated double-digit percentage spike in cargo — as happened in January 2019 — without running into equipment shortages.

Some chassis providers, such as Direct ChassisLink Inc. (DCLI) and TRAC Intermodal, bought new chassis in 2019, but for the most part, equipment providers were more likely to refurbish existing chassis due to increased US import tariffs on Chinese goods. Although there are North American manufacturers, the majority of newly purchased 20-foot, 40-foot, and 45-foot chassis are built by China International Marine Containers (CIMC) and imported from China. With a 25 percent tariff on this equipment, which can total more than $10,000 per unit, many chassis providers chose to lean toward the less expensive refurbishment. The North American Chassis Pool Cooperative (NACPC), for example, made very few orders in 2019, while most other pools reduced their order counts from prior years.

By refurbishing the oldest and most chronically broken units — installing LED lights, anti-lock brakes, and radial tires — chassis providers also aim to reduce the percentage of chassis out of service.

Some providers argue there are enough chassis in use to handle volume crunches, but due to the often unpredictable nature of cargo flows, they’re rarely where they need to be. In other words, it’s not an issue of supply, but one of matching that supply with the market in need.

“There are attempts to develop better data sharing to anticipate issues in advance. But if you don’t have five or six weeks of lead time, it’s hard to reposition enough chassis from one market to another to handle a spike,” said Dave Manning, chairman of the NACPC.

He explains that a truck is necessary to reposition chassis. Each truck can move four to five chassis. To move 1,200 chassis, for example, requires as many as 300 available trucks, often on very short notice. Because there is a correlation between import surges and truck demand, available drivers and capacity is harder to come by even without the sudden need to reposition chassis from one market to another.

“There is a lot of work on information sharing for forecasting, but I don’t think it’s a well-oiled machine yet,” Manning said.

TRAC Intermodal CEO Jennifer Polli agreed that some customers are better than others in terms of sharing volume data, but it’s trending in the right direction.

She said if ocean carriers were to share ship manifests prior to departure from Asia, equipment providers could plan for vessel arrivals in the US more easily. If, for example, TRAC knew how many CMA CGM or APL containers were due to land in Los Angeles on a given vessel and how many were going inland to Chicago or Memphis, it could position chassis accordingly. Class I railroads also provide information to chassis providers on what containers are on which trains.

“I think we get decent volume information. Is it perfect? No. Will it ever be perfect? I don’t know. But the turn times [the number of days a BCO holds onto a chassis] are very difficult to predict, even with historical data,” Polli said.

Complicating matters, containers traveling inland via an off-dock rail facility require a chassis for the drayage move to the rail terminal, while those using on-dock rail do not require a chassis, noted Ron Joseph, chief operating officer of DCLI.

“Let’s say a vessel is going into Los Angeles. We may know when it’s leaving China that there are 800 containers on the vessel. But what we don’t know is how many are using on-dock rail and how many are not until later [once the vessel is already at sea],” Joseph told JOC. “In some cases, not every rail container will move on on-dock rail. Some will be sent to [BNSF Railway] Hobart or [Union Pacific Railroad] ICTF, which then requires a chassis.”

This is of particular concern in the Port of Virginia, where Norfolk International Terminals’ on-dock terminal serves only Norfolk Southern Railway on dock, not CSX Transportation, while the Virginia International Gateway’s on-dock facility serves both Class I railroads. The Virginia Port Authority schedules vessels with many CSX containers to use VIG, but vessels arrive late and can be bumped to NIT to avoid bunching. When this happens, CSX containers must be drayed from NIT to VIG on a chassis.

Ultimately, Manning and Polli agreed that even as forecasts improve in 2020, there will likely still be gaps in equipment supply during peak volume periods.

In the short term, little is expected to change in markets that experience chronic shortages. A group of truckers and beneficial cargo owners (BCOs) has pushed for a single interoperable pool in Memphis, for example, and ocean carriers and railroads gave their approval, but TRAC and DCLI want to maintain private pools and interoperable pools. The coalition of truckers and BCOs believe a gray pool would eliminate outages similar to the one in January 2019.

“In Memphis, we had triple the volume within a two-week period,” countered Polli. “Were there issues in January? Yes. But I don’t know if it would have been eased if there were a single gray pool.”

She also said there are no additional agreements with DCLI on interoperability in the works. In July 2019, TRAC and DCLI signed a deal at the behest of BNSF that allowed each to tap into the other’s private pool to prevent a chassis outage in Dallas. Polli said there are no discussions to extend this agreement to other BNSF locations in Memphis, Chicago, or elsewhere, or to any other Class I railroad terminal in the eastern US.