As the U.S. heads toward what some economists consider “full employment,” trucking companies tracked by the Labor Department hired an additional 2,600 workers in February, pushing the monthly JOC.com Trucking Employment Index reading up to 99.9.

That means the more than 100,000 motor carriers surveyed by the U.S. Bureau of Labor Statistics for its monthly U.S. employment situation report are only one-tenth of a percentage point shy of their peak pre-recession employment level, last reached in May 2007. 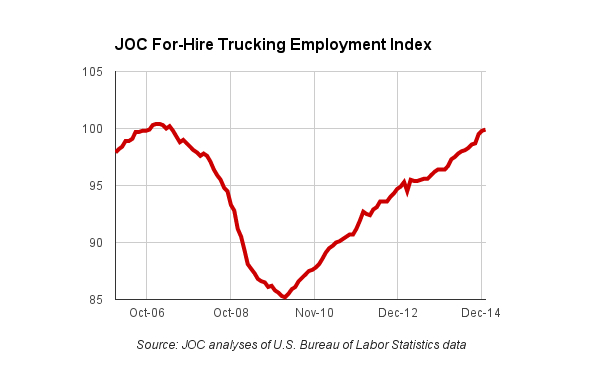 The prospect of near-full employment, a new employment peak in trucking and more good paying jobs in construction and other industries that vie with trucking for workers will keep upward pressure on driver wages and the truck rates shippers pay in 2015.

The February Trucking Employment Index rose 0.1 percentage points from January, when the reading was 99.8, according to revised monthly data from the BLS. The index reading for February 2013 was 96.4. That indicates an annualized growth rate in trucking employment last month of 3.5 percent, the same as in January and the highest rate since late 2012. That year, the growth rate averaged 3.8 percent and was 4 percent or higher in four months. 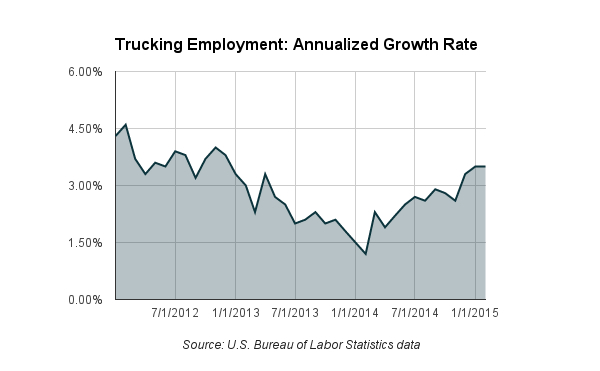 The average monthly increase in trucking employment, calculated from the BLS data, rose from 2,075 workers in 2013 to 3,833 employees last year, an 85 percent increase that likely reflects strong recruiting efforts and higher pay. The carriers tracked by the BLS added more than 4,000 jobs in eight out of 12 months last year, compared with four months in 2013.

At the same time, trucking companies say they are short by at least 30,000 drivers, while running at close to full utilization — more than 95 percent. That’s a sign demand for trucking capacity outstrips supply as the U.S. economy expands at an accelerated pace.

Trucking’s latest employment gains came as the U.S. economy added 295,000 nonfarm jobs in February, driving the national unemployment rate down to 5.5 percent. That’s the lowest unemployment rate since the recession ended in 2009. The U.S. has added more than 200,000 jobs per month for 12 straight months now, the best hiring rate in the U.S. since the mid-1990s, according to BLS data. Transportation and warehousing businesses accounted for 18,500 new jobs in February, the seasonally adjusted payroll data show.

Economists surveyed by The Wall Street Journal believe the U.S. will hit “full employment” — the point where the economy is using all available labor — late this year, as the national unemployment rate drops toward 5.1 percent. The U.S. Federal Reserve considers an unemployment rate between 5.2 and 5.5 percent to be “normal,” The newspaper reported.

At the same time, there were 5 million available jobs on Jan. 31, the highest level of job openings since 2001, according to BLS data. That includes 205,000 openings in transportation, warehousing and utilities, the federal agency said.

many of us have been forced

Permalink Submitted by stephenwwebster... on Mar 31, 2015 3:49PM EDT
many of us have been forced by low wages and freight rates and rates to owner-ops A reefer trailer needs $2.00 per a mile plus plus $48.00 per hour dock time with more freedom on the del. times on a round trip basis plus tolls. A dry van needs $1.78 u.s. per mile plus $42.00 u.s. per hour dock time a flatbed needs $1.87 per mile round trip plus to reduce driver turnover a second person supplied by the shipper on tarped loads. Tarping should charge out at 50.00 u.s. per hour many truck drivers including my self have shortchanged by trucking customers . I was forced out of trucking after $20,000 damage was done to my truck and the insurance company denied the claim when the other truck driver hit my truck from behind in a snow storm,. 5193578686 Stephen Webster. P.S. I am currently staying at the salvation army homeless shelter
Trucking Logistics
Regulation & Policy›Economy Watch›US Economy News
Trucking Logistics›Labor
North America
North America›United States

Yellow gets one contract for all Teamsters

The State of the Automotive Industry
END_OF_DOCUMENT_TOKEN_TO_BE_REPLACED