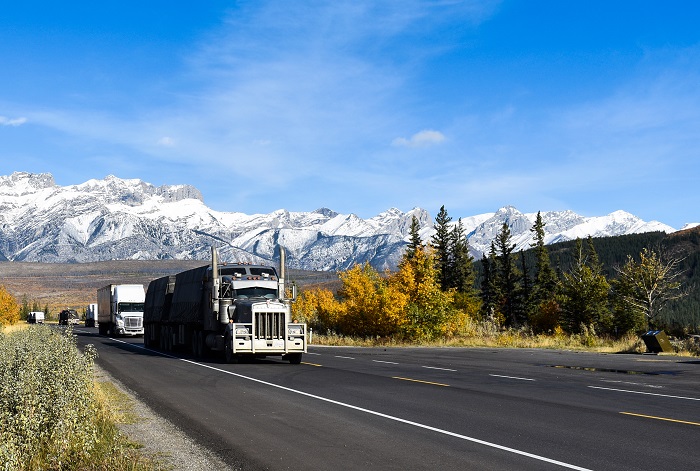 The rise in US truckload rates has been dramatic. Photo credit: Shutterstock.

The tightness in US trucking seen in a scarcity of capacity and a sharp upswing in rates in recent months is making itself felt in the ocean container space.

Because of the growing likelihood of higher drayage and regional trucking rates this year, ocean carriers are hoping to limit their exposure in so-called store-door contracts where they have responsibility for inland moves to and from the port. A multiyear trend of ocean carriers seeking to limit their business to port-to-port moves for US inbound cargo — in order to get containers back into circulation quickly and avoid often loss-making inland moves — has taken on greater urgency. That is because potentially annual contract rates will not cover higher costs of drayage that carriers would be obligated under store-door terms.

“Due to the trucking situation, the carriers will do everything they can this year to avoid committing to store-door deliveries,” said Cliff Pyron, chief commercial officer of the Georgia Ports Authority.

The ocean carriers’ long-standing determination to retain the business of large retailers and other large trans-Pacific importers, even if it means accepting marginally profitable or even loss making cargo, is slamming head on into the reality of the trucking market. Over the past roughly six months, the US trucking market has turned against those on the buy side of truck capacity, a category carriers fall into when securing capacity on behalf of store-door customers, and will likely continue to be tight well into 2018. Carriers are telling customers that avoiding the high costs of drayage will be a priority for them in annual negotiations for trans-Pacific service contracts, many of which roll over on May 1.

“There is some caution being put into the contract negotiations with respect to store-door, given the potential difficulties securing trucking power,” Greg Tuthill, chief operating officer of CMA CGM America, said at this month’s Georgia Foreign Trade Conference (GFTC) at Sea Island.

The tightening of truckload rates and subsequent rising of rates has been dramatic. The Cass Truckload Linehaul Index, which measures pricing excluding fuel surcharges, rose 6.2 percent year over year in December, climbing for the ninth consecutive month with no sign of reaching a plateau, JOC trucking editor Bill Cassidy reported in late January. The DAT national dry van spot rate average of $1.94 per mile as of Feb. 7 is up 34 percent year over year, according to the JOC.com Market Data Hub.

Industry executives at GFTC on Feb. 4 to 6 pointed to the electronic logging device, or ELD, mandate, as the driver of shrinking drayage capacity. The ELD rules, which took effect Dec. 18 and eliminate cheating on driver hours-of-service limits, have a greater effect on the often long-haul drayage moves from Southeast ports, where cargo is frequently driven hours inland to locations in eastern Georgia or South Carolina or Tennessee. Drivers operating within a 100-air-mile radius, whether with a commercial drivers license or without, are exempt from the ELD rule.

Carriers' fear of exposure to a tight drayage market is justified based on the 2018 outlook, with the current market looking set to continue through this year, trucking executives said in recent earnings calls. “Given the healthy economy, high freight demand, and tight capacity environment, we do expect prices to increase in 2018,” said John Wiehoff, CEO of C.H. Robinson. The top US third-party logistics provider reported a 15 percent jump in truckload rates in the fourth quarter.

The impact on ocean moves is not only related to upcoming contract negotiations; it is having an impact now. Carriers that had agreed to store-door rates with customers are finding that truckers who they contracted with to provide store-door moves are unable or unwilling to provide capacity at the negotiated rates, which by now may be well below the spot market. That is leaving some beneficial cargo owners (BCOs) unable to find truck capacity at the rates they negotiated with carriers, leaving them exposed to the higher spot market.

“In some areas, the trucking power is very tight, and, obviously, dispatches are not being accepted at 100 percent,” Tuthill said.

The trucking situation resulted in very little discussion at the Georgia event about shipping topics that had dominated prior events, such as handling mega-vessels at port or deeper channels. During the conference, the Georgia and Virginia port authorities disclosed a rare joint initiative to inject more chassis into the Southeast market to combat a shortage that is exacerbating an already difficult trucking environment.

Interesting, an inability to