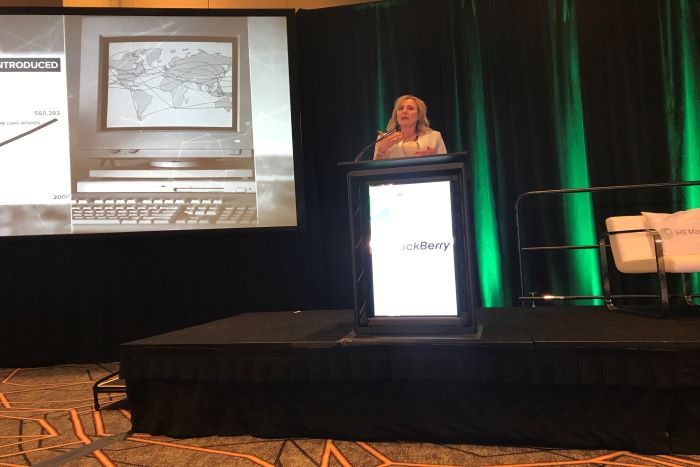 CHICAGO — Technology will drive a revolution in domestic trucking in the next decade as digital platforms will allow brokers and drivers to eliminate wasted minutes, maximize efficiency, and provide greater real-time insight into capacity and rates, a J.B. Hunt Transport Services executive said.

“The revolution will happen because now we have technology right in the palm of our hands that will enable us to continue to move forward as transportation service providers and shippers alike,” Simpson said in a keynote address at the conference. As an example of the smartphone-as-desktop trend, Simpson said she purchased her last used car through eBay, new clothes from Stitch Fix, and booked last-minute lodging through Airbnb within the last couple years.

Approximately one-third of the available hours of service for drivers are underutilized or wasted, according to Simpson, which is why there are so many technology startups seeking to better match loads to available drivers.

“We don't think there's a driver problem. We don’t think the driver shortage is actually as prominent as one might think,” she said. “The problem is access to information, access to understanding what capacity is available at any one time. We actually don't believe people will be able to hide what the capacity looks like, or hide what price looks like over the next 10 years because that information will come to market. We will understand what happens from a transparency perspective.”

Not only will price and capacity information be easier to access for shippers, but also reviews of their facilities and drivers. Dock411, for example, is an existing web service that allows drivers to rate docks and give reviews — a Yelp for the transportation industry. Shippers, however, will also be able to rate drivers in the future, similar to popular ride-sharing apps Uber or Lyft.

Technology will also make track-and-trace capability commonplace. Simpson noted we can track where our pizza order is in real time; watch our Grubhub, Uber Eats, and DoorDash orders door to door; and see where our Uber or Lyft vehicle is located and when it will arrive. The location of a pallet, however, is not so easy to track, particularly in the less-than-truckload (LTL) sector, in which there are often shipments from several cargo owners in one trailer.

Small owner-operators that make up a vast majority of capacity have resisted efforts to be tracked every hour of every day. Drivers on Rate Per Mile Masters, a Facebook group with more than 25,000 members, say they are worried brokers will use the information on where they are and how many hours are left on their clocks to drive down rates and gain leverage in negotiations.

“The problem is that we've only given the carriers one reason to do it: because we want to trap you. That's not actually accurate. What we want to make their job more efficient. We have to provide a give and take,” Simpson said. “They can gain access to shipments. They can gain access, speed, and not having to jump through hoops. [Drivers] are not experts in negotiating; that's not what they do every day. They're experts in driving; that's what they want to do every single day.”

J.B. Hunt 360 is the company’s answer to these issues. The online portal provides shippers real-time price quotes for truckload, LTL, and intermodal services. Drivers can gain access to J.B. Hunt brokerage loads without having to make phone calls, book loads online, and even negotiate digitally rather than over the phone.

Ultimately, the success of trucking’s technological revolution will be determined by uptake among drivers. With an aging workforce that includes drivers who might not be as savvy with smartphones, it might take a while to develop an Uber-like reality in the trucking industry, but according to Simpson, the revolution is coming.